← My Heart Pumps Neon
They Didn’t Get the Overwatch License →

When writing about Crystal Clans earlier this year, I pointed out that this was a system with a lot to prove. It was fiendishly clever the way it bounced initiative between players, not to mention how it marched to a killer tempo and boasted some cool ideas about unit and hand management. But deck construction and a solid roster of factions were still to be seen. Even more unenviably, the specter of Summoner Wars lingered over the whole thing. Was it possible for Plaid Hat to deliver a tactical card game when they’d already perfected the formula just a few years earlier?

Well, the first four expansion decks are out. Let’s see if they allay any of those concerns.

The Feather Clan is absurdly mobile.

Which is fine as far as my free time goes. Maybe. One of the big appeals of Summoner Wars was that building a deck was such a cinch that it could be done right before a match. My guess is that Crystal Clans will do something similar, letting you swap out heroes and units with ease, but until the rules are released — which will apparently be with the next wave, according to a secret inside source whose name absolutely does not rhyme with “Andrea” — there simply isn’t any telling.

However, the good news is that each of these four new factions are definitely cooler than the original six.

This isn’t to say that the originals were dull. The Stone Clan in particular, with its long-range siege support, was a clear standout. But by and large I wasn’t entirely captivated, especially with the horde-assembling Blood Clan and combat-tweaking Meteor Clan. If asked under pressure, I probably couldn’t even tell you the difference between the Flower and Water Clans. 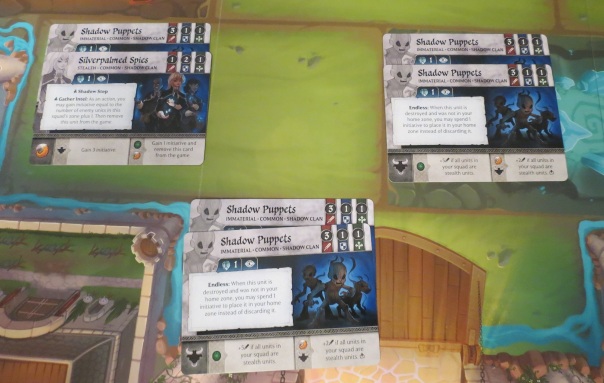 These new guys, though? Man, I barely even want to play with the originals anymore.

The most rules-heavy addition is the Leaf Clan. Like a tender sapling they start off fragile only to grow into a sturdy oak as a match progresses. The secret to their success is their Clawkin Shifters, who bury defeated enemies as “sown” cards, laid face-down in that space. From then on, that fertile soil can be farmed in any number of ways. Saplings grow stronger in sown regions, Dryaduns can summon sown units straight onto the field, and the hero Kesslia can teleport to any sown card. Sown sown sown. A bunch of Leaf Clan units can even “regrow,” which means they summon directly to sown spaces. No more trekking across the battlefield.

Of course, this isn’t necessarily easy. Clawkin Shifters are essential to Leaf Clan’s strategy, either as units on the field or battle cards. In fact, they’re often more potent as battle cards, sowing either everything you lose or everything your opponent loses. Clever opponents will want to avoid these guys, or focus on battle options that negate their rival’s card.

On a similarly technical level stands the Shadow Clan, though more because their abilities strive in multiple directions rather than turning on a single linchpin. They have thieves who steal from the opponent’s deck, spies who sacrifice themselves to gain heaps of initiative, suicidal rogues who hit hard only to crumble, and endless armies of Shadow Puppets. For every situation they seem to have a trick; their only weakness seems to be tightening all those individual slips and pokes into a fist.

The other factions aren’t quite as technical, but both sport tricks of their own. The Feather Clan is, as you’ve probably sussed out, about movement and board control. In addition to leaping across the entire battlefield in a single move — provided they’ve stacked their squad correctly — they can also immediately kill off weak stragglers and push enemies out of contested zones. One of my favorite Crystal Clans maneuvers of all time came courtesy of Dendra the Skykeeper, who can carry non-flying units along with her. Even more edifying than soaring into my opponent’s homeland and land sixteen damage to her deck in a single move was the expression on her face when she realized I’d be earning a free crystal as soon as she replenished her hand.

My personal favorite is the Fang Clan. Their fetish of choice is that they’re, uh, wolves and bears and the like. This is more than a splash of paint, because they’re organized like a pack, with “alpha” units leading the charge. Whenever they march across the map, they’re forced to rearrange themselves so that an alpha is on top — and if one isn’t, the entire squad disbands.

There’s always been an element of carefully selecting which unit to put in charge of a squad, but the Fang Clan elevates the conundrum to a new level. While alphas are cheap and incredibly powerful, their abilities are nothing but a pain to manage. Bears eat cards straight out of your deck, Jackals ruin your combat prowess, Caracals can’t score crystals, and Raccoon Warriors love to fight so much that they’re going to kill something this turn, whether from an enemy’s squad or your own. Their entire society is one of constant competition, juggling between alphas to suit your current needs and hoping your opponent isn’t shrewd enough to take advantage of your missteps.

The point is, these factions are far more exciting than anyone from the base game. They each pack significant strengths, weaknesses, and tics. Wrangling them to capture crystals and smash enemy squads is easily the best time I’ve had with this system.

Fang Clan’s power is the power of adorableness. D’aww!

When you get right down to it, I’ve reached an odd place with Crystal Clans. While I’m happy to dive in for a match or three, it hasn’t captured my affection the way Summoner Wars did. To be honest, that was probably always a long shot. Summoner Wars arrived at a very specific time in my board gaming life, when I was interested in thoroughly exploring everything a single game had to offer. Now I’m more interested in bite-sized experiences, those that don’t demand repeat attention over weeks and months. The word “metagame” once gave me a buzz of excitement; now it makes me vaguely tired. How do I squeeze in worrying about whether a particular strategy is overpowered, or fussing over how to make an underrated faction into a winner?

In that regard, I’m enjoying Crystal Clans more now than when it first released, but I still can’t figure whether I’ll be interested in another year, or even a month. These factions represent Crystal Clans at its absolute best, and still it doesn’t quite feel like it’s fully arrived. Hopefully the next wave will sweep me off my feet.

(If what I’m doing at Space-Biff! is valuable to you in some way, please consider dropping by my Patreon campaign or Ko-fi. Right now I’m a member of the Flower Clan. With your help, I can join the Fang Clan).

Posted on November 13, 2018, in Board Game and tagged Board Games, Crystal Clans, Plaid Hat Games. Bookmark the permalink. Leave a comment.

← My Heart Pumps Neon
They Didn’t Get the Overwatch License →