Negotiation in games is great, isn’t it? Unfortunately, it’s also a beast to pull off. You’ve got to provide something worth haggling over, hopefully provide avenues for weaker-willed players to thrive (they are weaker-willed, I call it like I see it), add a dash of risky speculation, and probably figure out how to keep those two from spending the whole night shouting at each other. You know the pair I’m talking about. 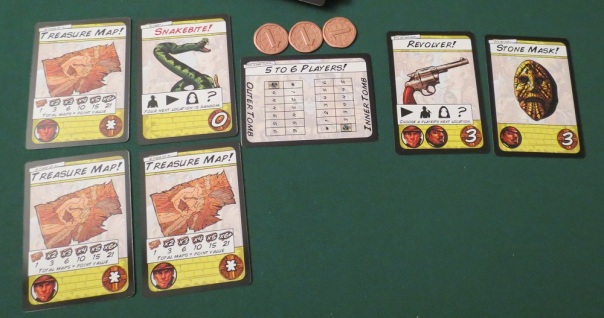 Coins from SeaFall not included.

Being a game about raiding tombs for treasure, you might expect Tomb Trader to provide plenty of desirable trinkets. On that count, it doesn’t disappoint. Tapestries and crowns, probably-cursed sarcophagi and adventure hats, and even venomous snakes and bullwhips. Your goal is to amass the largest fortune, and there are plenty of tempting items to choose from.

However, the game’s first twist is that not all items are equally alluring to all players. An eyeball preserved in a crystal flask dredged from a pyramid basement, for example, is obviously going to be worth a few pennies on the open market. It’s just that it’s going to be worth more to a taxonomist or professor than to your average treasure-seeker. The same goes for nearly every piece of loot in Tomb Trader’s ample deck. Playing as the collector means a wide assortment of items are worth a little extra once ensconced in your personal museum, while the hunter is mostly interested in practical items like revolvers and medical kits.

Nobody at the table starts with any idea who you actually are, though. For at least the first few tombs, you’re free to play it close to the vest, at least if you think anybody is really watching to see which items you’re likely to pursue. In practice, Tomb Trader moves too fast to be solving everybody’s hidden identity, at least not until you’re a goodly number of hands into the game. Not that this makes your character insignificant. Instead, it’s more of a personal goal to fulfill than an invitation to deduce everybody else’s intentions.

Then again, knowing that your friend is the artist and therefore really wants that necklace can give you some significant leverage once the talking starts.

Reason #2: There Are Two Negotiations

Instead of tossing everybody into the same mosh pit and praying nobody gets concussed, each round opens with a single all-important decision. There are two tombs, you see, with treasures dealt to both at random, and before you’re allowed to dive into the actual task of persuading your friends to let you walk away with that ancient statue, you’ve got to decide which negotiation you want to take part in.

This bid is done simultaneously and in secret, making it almost impossible that the same people will always be locked into conversation. Instead, there are tombs with more or less loot, and it’s up to you to decide where you’re more likely to find success. Sometimes you’ll be trapped with the group bully; others you’ll walk into a tomb only to realize that all the invertebrates have congealed around the same batch of treasure that’s caught your eye. The point is, every round presents a new social conundrum to navigate.

This is also one of the reasons that Tomb Trader falls apart with smaller numbers, despite being advertised as a game for three to six players. You really need at least five just to prevent one person from picking up an entire roomful of glittering things each round.

This isn’t the first time Level 99 Games has put a timer on your actions. In Millennium Blades, you’ve got around 20 minutes to craft the perfect deck before the world championship. Here, designer Asher Stuhlman has decided that you get one.

Yeah, you heard that right. One minute.

What happens when that minute is over? Well…

Each trader has their own preferences of loot.

…the tomb collapses, taking all that sweet gold with it.

Not that this happens all that often. Most of the time, everybody is so panicked for a sip that they’ll let somebody slip away with a good hard guzzle. Or at least that’s the idea. A handful of people enter a chamber, probably shouting because there’s an entirely unrelated conversation happening in the other tomb, and while they’ve got some idea what they want, there’s nothing that makes a person fiscally flexible like the threat of a ten-ton boulder rolling their way.

Really, this time limit and its strict enforcement are possibly the best thing to happen to Tomb Trader. If you’re getting bullied too hard, feel free to let the whole place come crashing down. Unless everybody in your chamber is unanimous about who gets what, nobody is going home with a wooden nickle. Which is too bad, because I’d bet a quarter that a wooden nickel is worth more than a regular nickle.

Reason #5: It Ain’t Over Until It’s Over

And by that, I mean you can’t ever be certain a particular player is in the lead — which also means it isn’t always easy to pick on the leader. It’s a small thing, but it’s a small thing that makes Tomb Trader brisk from start to finish rather than bogging down in the moment-to-moment question of who got the better deal out of that last batch of table-talk.

And this is a game where briskness is a virtue. The entire game lasts maybe 15 minutes, and that’s if you’re really dragging things out whenever you deal the cards.

In practice, you’ll occasionally figure out somebody’s identity and bully them into a better deal, then get stuck with a new group and agree to take a few too many cursed jars, then be the only guy who went to another tomb, and so on and so on. It’s fast, it’s silly.

Look, Tomb Trader isn’t necessarily the sort of thing that’s going to revolutionize the genre. It isn’t a Knizia game. It isn’t even your usual Level 99 game. Instead, it’s a highly competent, quick, and portable game that’s excellent with the right number (and disposition) of people.

Posted on May 17, 2017, in Board Game and tagged Board Games, Level 99 Games, Tomb Trader. Bookmark the permalink. 1 Comment.