From Casablanca to Potsdam

Churchill is a game I’ve wanted to write about for almost two years. It takes a sky-high view of World War 2, pitching you as the Big Three in their efforts to break the back of the Axis Powers. Yet it couldn’t rightly be described as a wargame. Rather than emphasizing the strategy or logistics of war, it’s about the interactions between Churchill, Stalin, and Roosevelt (and later Truman) across multiple conferences as they divide the responsibilities and risks of beating Germany and Japan — and eventually divvy up the world itself. It’s a game of politics, of give-and-take, of hard expediency in the face of crushing reality. It’s about working hand-in-hand with your ideological enemies and hoping you have enough clout to avoid triggering yet another war once the current one is wrapped up. It is, in a word, bold.

A glimpse at the European Theater.

Let me tell you a story.

It was my most recent attempt at Churchill, a ten-conference game that would span five and a half hours — there’s a reason it’s taken me two years to get around to penning this review — and Stalin was having a rotten day.

For the duration of the Tehran conference, he’d put his foot down on a single issue. Yes, the Americans could continue work on the A-bomb. Sure, the British could expand their colonial authority. Fine, they could quibble about whether to promote national self-determination or not. But the one thing Stalin refused to budge on was the issue of loaned equipment from the West. He would be receiving his shipment of trucks, boots, and radios, spasibo.

You see, the war wasn’t going well for the Soviets. While the Americans and British pounded the beaches of Normandy and sliced through the soft underbelly of Italy, while the island-hopping of the Pacific continued with nary a hiccup, Stalin’s generals hadn’t managed to break across the Don River. Everyone was rushing toward Berlin, and Mother Russia was out in the cold.

Bargains were struck that saw Stalin taking home huge quantities of material. All of which he immediately deployed along that single front, stacking offensive support markers like Jenga blocks. Even after relocating some of their troops to defend the Lowlands from the joint UK/US offensive, there were still plenty of Germans lined up to protect their Eastern Front, but all Stalin had to do was roll an eight or lower — on a ten-sided die — and the front would trundle forward.

He rolled a nine. 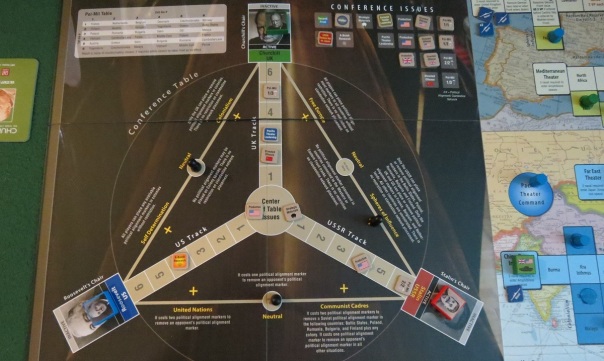 It’s little surprise that Churchill’s randomness is its toughest element to swallow. There’s nothing quite like arguing with your friends for twenty minutes only to watch in disgust as all that red-faced hustle earns you nothing on the ground. In this instance, Stalin was right to be upset. He’d spent diplomatic capital, made bitter concessions, and entirely surrendered portions of the political war, yet his one big effort to inch closer to Berlin was a total bust.

I’ll give you some idea of what went into that failed moment.

Churchill is broken into two distinct halves, both literally on the board and in terms of gameplay. On one side, you’ve got the negotiation table. This is where the Big Three must come together to debate their respective issues. The topics in question vary depending on a whole grocery list of circumstances. Perhaps the leadership of a particular theater is in dispute, or maybe someone needs to suckle at the teat of Lend-Lease, or perhaps Roosevelt is whining about the United Nations again. Maybe you’d like to force Russia to finally invade Manchuria to take some of the pressure off the CBI push, or prop up resistance movements in Eastern Europe to engender post-war gratitude. Or perhaps you’re just upset about something and you’d like to claim a bunch of strategic resources for yourself.

There are topics aplenty to wrassle over, is my point, and they all have a tangible impact on the second half of the game. Not only will military fronts roll forward or stall in the mud based on how much support you’ve provided them, but nations will pledge their loyalty to their liberators, naval convoys will free up new sources of production, and the all-important Manhattan Project will edge closer to completion — and possibly theft.

With so much going on, Churchill might sound downright unapproachable. It isn’t. If anything, its moment-to-moment process is breezy. For the most part, your decisions come down to selecting an issue and nominating a member of your staff to bring it up at the conference. That issue is then moved toward your side of the table, everyone is given a chance to debate it to slide it back, and there you go. When it comes time to direct the course of the war, you take the issues you’ve won and transform them into navies, offensive support, and clandestine networks. Not too bad.

Note how I didn’t say “simple,” because it isn’t that either. The beauty of this particular beast is that the rules themselves aren’t all that hard to parse. Instead, its challenge lies in figuring out which issues to champion, how to talk your rivals into looking the other way while you set up loyal governments or set global policy, and then shaping words into action. It is, in effect, one of those rare games where how prettily you bluster is every bit as important as how accurately you calculate the odds. 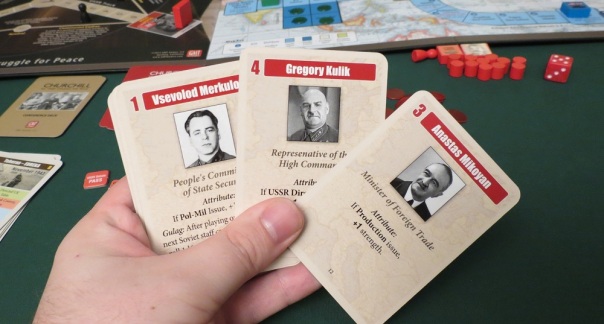 It isn’t just the fact that a particular invasion might not pan out, or that you might draw a conference that your leader refuses to attend, though those can absolutely sting. Crud, in our most recent play, Roosevelt died the first time he stood at the podium to address his allies at Casablanca, leaving Truman ill-prepared to take his place. Meanwhile, one of Stalin’s aides sent one of his far more competent comrades to the gulag. Even the venerable Churchill is liable to spend a considerable number of his conferences recovering from heart attacks.

But the really sticky bit is that even the outcome of the entire game might hinge on a rolled die.

In one of the game’s riskiest moves, winning Churchill is a testy prospect. Rather than blast across the finish line, your goal is to win by a sliver. Take too many countries, smash the Axis too completely, shaft your political rivals one too many times, and the other two will align to bring you crashing back to earth, often resulting in a roll-off to determine who finally comes out on top.

On the one hand, this can be a mighty anticlimactic way to resolve such a lengthy and involved evening of finagling. Watching as the guy in distant second place rises to the top because you were too effective — well, it stinks. On the other hand, the constant aggravation of never letting yourself break away from the rest also feels keenly appropriate. The Big Three came to be occasionally titled the “Strange Alliance,” a pact between the world’s most powerful capitalist, colonial, and communist states. Instead of retelling the sweep of WW2 — easily one of wargaming’s go-to topics — Churchill is determined to draw the spotlight to the strain between these three dissimilar worldviews. Each side isn’t merely looking to defeat fascism. That’s step one. Steps two through ten are about remaking the entire world in their image. In that context, letting the spittle fly becomes the best course of action. 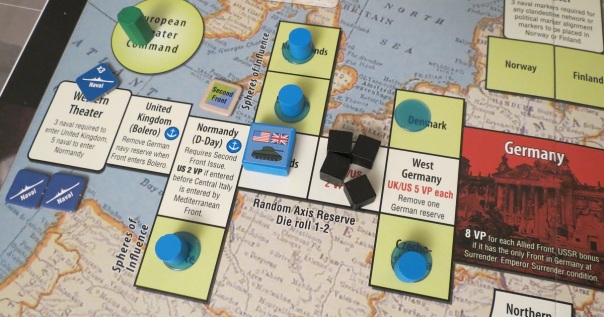 To its credit, even Churchill’s peculiarities are largely mitigated by its emphasis on negotiation. To return to our story, Stalin’s rotten day turned out sunny after all. Thanks to his terrible luck, he was able to leverage his rivals’ sympathy at the next conference. More material, more aid, a stay on the whole “get Russia into Manchuria” thing — all was his for the taking. He never did enter Berlin, but his renewed focus on swaying local populations and the tone of global politics was enough to propel the Soviet Union to the top.

Churchill is at its best when it goes like that. When you’re arguing, or clashing over the same issue over and over again, or losing sight of the long game because of petty rivalries, that’s when things get interesting. It’s also when the game’s statement on how these dynamic personalities argued their way into the twentieth century’s state of affairs pops into focus. What happens when a bear, a lion, and an eagle walk into a bar? This is what happens.

From that perspective, even failing to cross the Don River on a sure-thing roll feels okay.

Posted on May 4, 2017, in Board Game and tagged Board Games, Churchill, GMT Games, Mark Herman. Bookmark the permalink. 8 Comments.