I’ve got a hypothetikos situation for you. You’re a Greek god, okay? You live on Olympus, flatulate lightning and belch storm clouds, all that. But the residents of Greece just aren’t giving you any respect. They leave goat offal for votive offerings, dampen the back of your shrines whenever nature’s urge strikes them, and deploy your exalted name as a mere punchline. “Where do you keep all your Pegasuses?” they ask. “In Zeus!”

Deep breath. What do you do?

If your answer is to create a bunch of monsters and chuck them at the cities of Greece in what amounts to an Olympian temper tantrum, you’ll get along just fine with Monstrous. 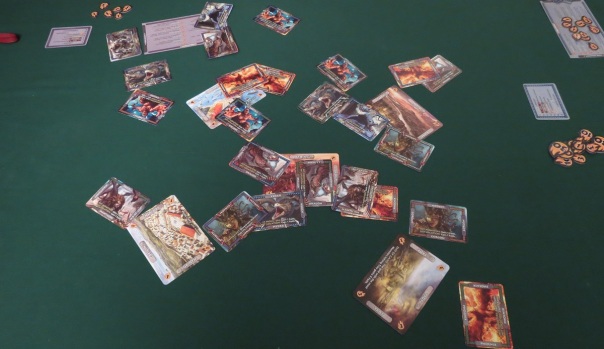 And how do you accomplish this chucking? Well, by literally chucking the monsters, in card form, at a table packed with unruly cities. Naturally. As a means of tying together gameplay and character motivation, things don’t often get much cuter than this.

So it’s a pub game. The sort of thing that usually requires the lubrication of a stiff drink, doesn’t require much mental overhead, gets people laughing, and wraps up in maybe fifteen minutes.

What separates this from tossing around your extra Magic: The Gathering commons or a dog-eared pack of Bicycles is the fact that the game’s monsters actually do something. Hitting one of the table’s cities and scoring a few points of faith is human; landing a Harpy atop both a city and another monster to steal their owner’s faith is divine. Each of the game’s twelve monsters brings something different to the table, as do the various cities that stand ready for a good ransacking. And while not all of them manage to feel distinct — there’s only so much you can accomplish with a game that’s about flinging cards onto a table, when you get right down to it — there is something undeniably pleasant about cobbling together the occasional light stratagem. Locking down a crowded destination with a Siren (bonus faith when hit!) or Gorgon (instantly kills monsters landing on it!) is unexpectedly silly, as is earning extra tries with a missed Pegasus, having the Hydra land on failed monsters to throw them again later, or really pillaging the stuffing out of a high-value city with a Giant. 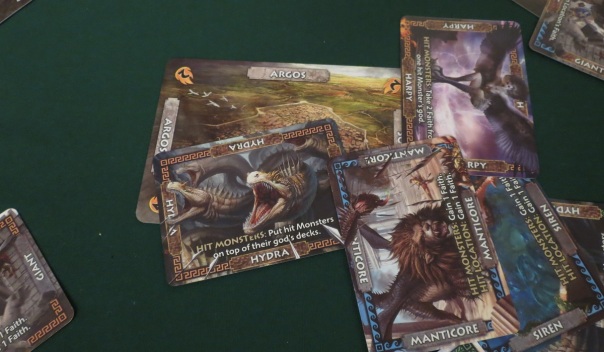 And, well, that’s pretty much all there is to say about Monstrous.

To be frank, this is the sort of game that will either appeal or it won’t. As a quick filler or with an exceptionally rowdy group of friends, it can be a lot of fun. For anyone expecting more than some very mild hand management — it’s up to you what to throw from a limited selection that replenishes each round — or who doesn’t see the appeal in playing a game standing up, or who wants to make their brain cells earn their keep, then there isn’t going to be much of a draw here. It’s fast, silly, and relies on being proficient in the superpower of the dumbest X-Man. It’s also a little too straightforward, doesn’t always embrace its premise or silliness as much as it could have, and relies on… well, you know.

Posted on March 8, 2017, in Board Game and tagged Cool Mini Or Not, Good Games Publishing, Monstrous, The Fruits of Kickstarter. Bookmark the permalink. 1 Comment.