What do luminaries George Washington Carver, Alexander Graham Bell, Marie Curie, and Guglielmo Marconi have in common? Their love of contraption racing, naturally.

If nothing else, Steampunk Rally, which comes with sixteen characters to select from, makes for a serviceable who’s who of inventors. Slap down Sakichi Toyoda, ask what he invented, then shake your head in resignation when everyone guesses Toyota. That’s the man’s company, not one of his inventions. Depending on the way you say it, you either sound doubly smart or doubly pedantic. 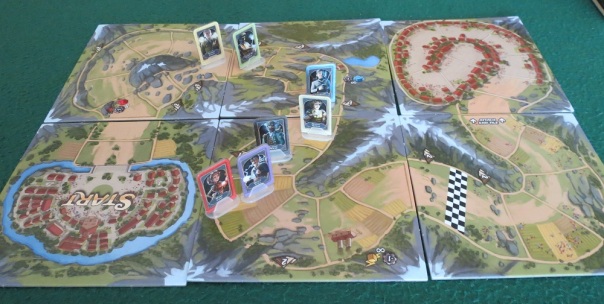 Just out for a pleasant country race. While polluting with lots of filthy steam.

Fortunately, Steampunk Rally has at least two or three things going for it beyond its suitability as an impromptu quiz session. The idea itself seems sound enough: cobble together a rolling/rocket/flying contraption, power it with boilers and capacitors and whatnot, slap on a few accessories for storing fuel or venting your pent-up heat, then ramble down the lane as fast as your machine will take you. As I’ve seen so many people write previously, it’s an engine building game that sees you building an actual engine rather than merely a metaphorical one.

Sounds tricky? Well, not so much. For one thing, the means by which an inventor can gather their desired components is as easy as passing around a hand of cards. Everyone picks up a gob of components, selects which one they want to attach to their machine, and faster than you can shout eureka and run down the street covered with nothing but a tactful throng of bubbles, you’ve got your very own racing contraption. Sometimes you’ll want to discard a card for fuel (dice) or bonuses (cogs), but the process is the same. 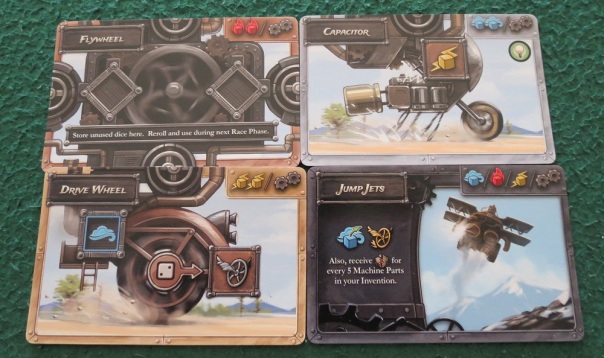 You’ll be drafting for both cards and resources.

Machines whirring, everyone settles in for the race itself. This mostly comes down to slotting dice into the slots found throughout your machine, matching energy types to maximize your output. Sometimes this generates drive to send your contraption ambling down the lane; other times, you can turn one type of energy into another, or harden your machine for the inevitable jarring it will undergo when you roll over rough terrain. After everyone’s wrapped up, you settle down for another round of picking out components, and on it goes until somebody’s crossed the finish line.

As such, Steampunk Rally is less of a sprint and more like one of those old movie races around the world, with everyone settling down at night to knock off broken components and patch on shiny new ones. One minute you’ll have a machine built like a tank, meant to endure jagged mountain passes. The next you might have a sleek rocket-boosted thing that will burn up fuel and then settle on rebuilding all its broken parts later. There are even flying machines that can hop over dangerous patches altogether.

Unfortunately, the things that make this system compelling are also its primary downsides. For one thing, it’s fantastic that everyone is involved at once. Everyone drafts new components together, everyone spends cogs to vent excess heat together — more on that in a moment — and everyone races together. There’s hardly any downtime. Sadly, this also means there’s hardly any interaction between the friends seated around the table. Outside of a few boost cards that obstruct your opponents with all the accuracy of a fire hose manned by a small child, you’ll never, for example, ram your opponents into the side of the race track. Those sorts of maneuvers are reserved for an even zanier racing game.

By a similar token, the focus on building a highly-efficient engine out of myriad moving parts means the game is often every bit as fiddly as its subject matter. Trying to squeeze some use out of a flash boiler that converts heat into steam when you don’t have heat and you’re not sure how you’ll make the best use of the resultant steam can be galling. Syncing nine or ten systems for maximum efficiency can eventually devolve into frustration, especially when some of the symbols can be a little too hard to distinguish from one another in quantity.

We knew that Albert would make something of himself!

Then again, neither of these are necessarily damning issues. The fact that it plays as well — and nearly as briskly — with a full complement of eight players as it does with the minimum of two is owed to its simultaneous play, making it perfect for a large group that wants something relatively light that can be played all together. At the same time, the more finicky aspects of the card play are the chewy center to an otherwise flaky shell, giving the strategically-minded members of the group something to focus on.

And really, it does carry a few strokes of brilliance in its back pocket. Notably, getting rid of dice is as important as gaining them, with spent energy sticking around as overheated components. In gameplay terms, this means that spent dice will clog up your machine, forcing you to either invest in cards that get rid of them or to spend a bunch of cogs to “vent” the heat pip by pip. Got a turbine that’s trembling under the strain of all that pent-up energy? That means it’ll be worthless until you get it simmered down a bit. And remember: it’s always an option to let it get knocked off on rough terrain and build something in its place. 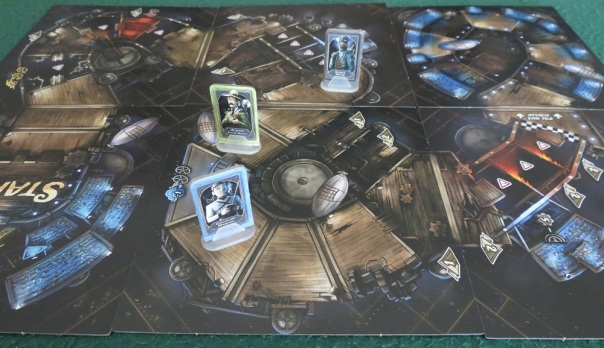 Awesome: the game scales to different player counts with ease.

All in all, Steampunk Rally earns a reserved recommendation from my end. It certainly understands that card drafting is at its best when it’s in service of something beyond a mere accumulation of cards and points, and a race to the finish line is about as good as that gets. Its dice system is clever, its drafting competent, and wishing for better player interaction seems pointless when it would most likely only serve to bog the current game down like a drag parachute behind a rocket ship. As it stands, there are certainly worse ways to permit a bunch of people to live out their fantasy of pitting the Wright Brothers against Ferdinand von Zeppelin.

Posted on July 13, 2016, in Board Game and tagged Board Games, Roxley Games, Steampunk Rally, The Fruits of Kickstarter. Bookmark the permalink. Leave a comment.