← Has BattleCON Been Exceeded?
Pier 51 Imports →

I don’t often read about politics, pretty much because they’re boring and deflating, but the other day I found myself totally spellbound by the President’s recent State of the Union. In it, he was talking about “levels of contribution,” the idea that we have different things to offer to our society, and using himself as an example. I won’t bore you with the details — I’m sure you can find it online with a quick search — but the basics came down to him arguing that his personal lowest level of contribution costs a red gem but provides three victory points. Not very much at all. At the next level he requires an additional yellow gem but gives four back, of any color, which is a two-for-one return on our investment. Then at each successive level he could contribute something more; for example, a boost to the nation’s scientific community, then an increase to our magical capacity. But he would also consume more gems. Because gems don’t come easily, this isn’t always an easy decision, but in the end a nation that most carefully invests its gems is the one that rises to the top.

Best State of the Union ever. Politics finally make sense. 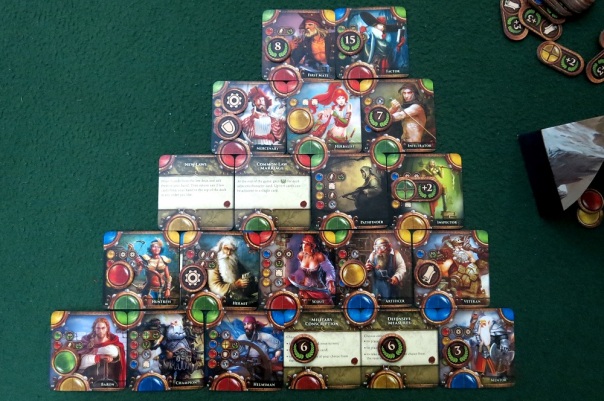 A true pyramid of powah.

Right there, that’s what Viceroy is about. You’ve got a limited quantity of gems, earning more is a pain in the butt, and you need to spend gobs of them in order to ensconce your followers into an ever-expanding pyramid of authority and power. It’s also a pyramid of magic, science, and infinity gems.

There isn’t much in the way of theme or setting going on — it’s apparently set in the same world as the mediocre Berserk: War of the Realms, so the less said about that the better. Something about influence and cutthroat politics, mumble mumble. It’s all just an excuse, a means of getting to the good stuff. 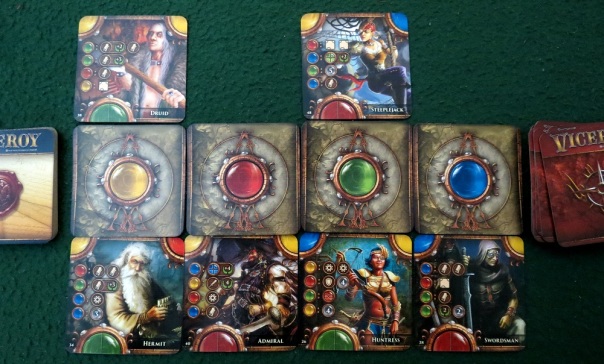 The auction block of powah.

And make no mistake, the stuff on display is of the reasonably good sort. Starting with a extremely simple auction for character cards, each round is simple in theory but mind-bending in practice. You’ve got two types of cards, characters and laws, and while they operate a little bit differently, the basic idea is that slotting them into your pyramid provides benefits, and it’s up to you to arrange the highest-scoring set. Sometimes they let you draw cards or give you a sack of gems. Science transforms skipped auctions from basically a waste of a round into a worthwhile money-maker, while magic icons don’t do anything at all unless you have charlatans around to suddenly make them incredibly valuable. There are swords for bullying other players during the auction or draining points at the end of the game, and shields for safeguarding against swords. Perhaps most desirable early on are those infinity gems, making cards cheaper to play.

With so many benefits to choose from, it can be easy to drown in Viceroy’s sea of icons. Enthroning cards in better spots costs more gems (lots more) but doesn’t always mean better returns. Reaching the top level is enormously rewarding, representing a huge investment of cards and gems. What’s more, by matching the corners of three cards you can create a solid gem. In addition to their cost, a card’s placement becomes of utmost importance, giving you a bonus gem right away and maybe some points at the end of the game — provided you grab the right icon.

“Provided you grab the right icon” is probably the best way to sum up this one. There’s an element of luck to the proceedings, though it’s largely minimized by the auction itself, so victory is mostly a matter of being the best at balancing your financial, card-drawing, and points-scoring needs. To call it a “points buffet” would only be misleading because it sells Viceroy’s offerings short. This is a Las Vegas hotel buffet, overflowing with different ways to earn points, any number of them viable options under the right circumstances. Whether Viceroy would hold any appeal for you depends largely on how appealing or revolting that description sounds.

Most of my pyramids of powah end up looking like this.

I’ve heard Viceroy compared to Splendor more than once. This strikes me as an odd choice of parallel, as though any two games about accumulating gemstones must be cousins. To my way of thinking, where Splendor was enjoyable for its simplicity, the fact that it was a pleasant shared activity, Viceroy works because it’s so thinky, because it reaches that mid-game point where you have no gems, no cards, and no prospects, then lets its shrewdest players figure out a crazy combo that takes four rounds to trigger but then showers them with rewards. It is, unsurprisingly, a heads-down sort of game for most of its duration, one where its players only emerge from their holes to quibble over the auction before retreating to the safety of their own pyramids.

And, well, that’s what Viceroy is offering: gemstones, combos, careful card placement, vaguely thematic illustrations, and a significant stretch of points-totaling once it wraps up.

Posted on September 19, 2015, in Board Game and tagged Board Games, GenCon Loot, Hobby World, Mayday Games, The Fruits of Kickstarter, Viceroy. Bookmark the permalink. 3 Comments.

← Has BattleCON Been Exceeded?
Pier 51 Imports →