← XCOM: Board Game Unknown
Love and Hate in the 15th Century →

It’s possible that my fascination with ancient games traces to the fifth grade. We were required to do a project on Dynastic Egypt, and while the other students were thatching Nile boats or mummifying the family cat, I drew up a theoretical set of rules for Senet, a game dating to around 3100 BCE. The rest, as they say (literally in this case), is history.

Ah, to know the true rules to Senet! Or to the other Egyptian board game mystery, the serpentine Mehen! To play the Royal Game with the Kings of Ur, or wager blankets against Montezuma’s riches in Patolli! To march hoplites through the narrow canyons of the Peloponnese in Nika— 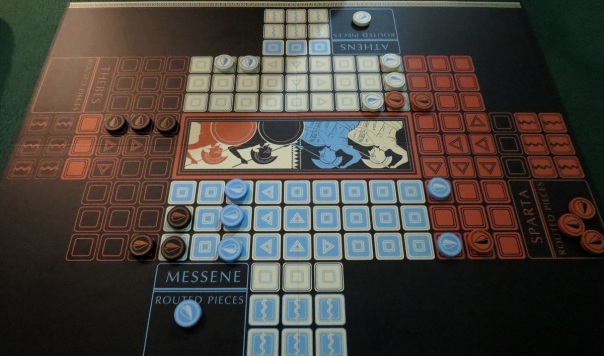 Fighting to determine the fate of Greece.

Of course, Nika isn’t actually an ancient game, at least not unless board games have become like high fashion without my knowing it and 2014 is suddenly very old news. Even so, it’s doing its darnedest to evoke an older, simpler sort of game, packed with strategic possibilities despite a minimal ruleset, while still using a few modern conveniences to speed things along.

Before we get to that, let’s cover the broad strokes. Nika is a team game set in Ancient Greece, Athens and Messenia versus Sparta and Thebes, in which you manage columns of hoplites in an effort to shove past, pierce through, and maneuver around your opposition. There’s only one kind of piece and a handful of moves, and is in every way the sort of game that takes two minutes to learn and quite a few more to become truly shrewd about the breadth of its possibilities.

The goal itself is very different from what you might expect. Instead of sacking an opposing city or routing your opposition — certainly a good thing, though routed troops return to the field without too much difficulty — your goal is to safeguard a single hoplite to your ally’s city. Much like Pheidippides of old, come to think of it, sprinting from Marathon to coordinate the Greek defense against the Persians.

Unfortunately for your hoplites, the narrow canyons of southern Greece restrict movement to two broad lanes, both of which take you past an opposing city. You don’t have enough pieces to make a full-strength push in any given direction without letting the other opponent past without trouble, so Nika quickly sets itself up as a game of priorities. Do you cede your advances in Sparta to regroup near Thebes? Or do you camp on the corner with a lesser force in order to push hard the other direction? Or do you push towards your ally’s position to bring them into your city? With severely limited soldiery, you can’t be everywhere at once.

And it isn’t just your soldiers who are limited in quantity. Each city’s turn only gives them two moves, and many offensive maneuvers leave you open to counterattack before you can regroup. On the other hand, clever teammates can coordinate their pushes in such a way as to limit one opponent’s ability to counter. “Isn’t that just like a helot?” you’ll quip, flexing the best of your historical terminology and quoting your favorite Kevin Costner movie at the same damn time. “Brings two actions to a four-action fight.”

I guarantee nobody will get it. Believe me, I’ve tried. 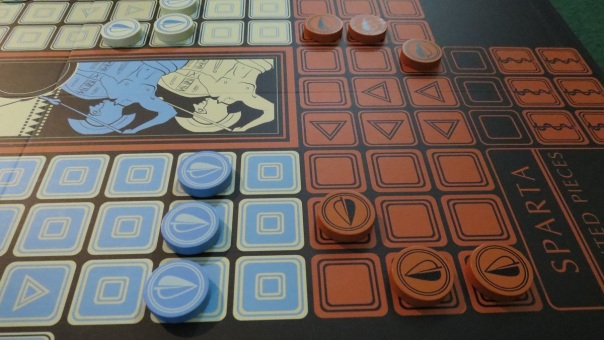 Debating how to form up.

The other thing that sets Nika apart is the way your hoplites switch between two very different states, completely altering the way you make use of them.

On their own, a hoplite is exceptionally mobile, rotating his dory (the hoplite’s spear) in whichever direction he moves. This makes it easy to chew through multiple enemies at a time, or quickly adopt a defensive posture by pointing your dory at the nearest enemy — because obviously, you can’t rout an enemy hoplite head-on. Only a flanked Greek would dare to run for his life.

However, hoplites can also combine into phalanxes. Once you get a group of them adjacent and facing the same direction, they can rotate and move as a group, though this is a slower process than the way a single hoplite can turn and move simultaneously. But besides the obvious advantage to moving a whole bunch of hoplites with a single action, large phalanxes can also shove smaller groups out of the way, clearing a path for your tiny Pheidippides’ passage. 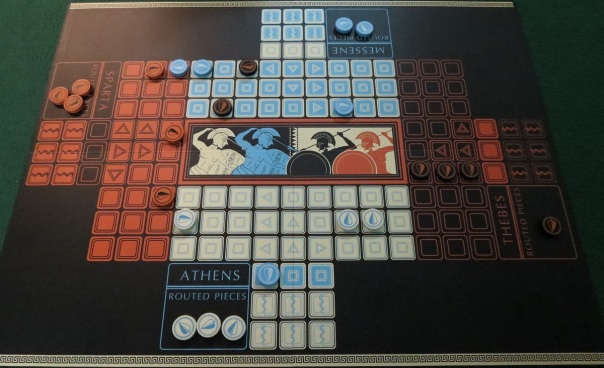 Victory to Athens and Messene!

The transition between phalanx and individual is fluid and easy to grasp, as are the majority of Nika’s basics. For such a simple concept, there are lots of things to consider, and coordination between your two cities is a must, whether controlling both or splitting the responsibility with a teammate. Divided allies will perish alone.

All this heady stuff has the downside of making Nika burn quite a bit of mental energy, especially once two armies get into close proximity of each other, and downtime for analysis is common. Worse, there’s a very real possibility of stalemate, and the manual comes with multiple criteria for determining a draw. I suppose I chalk this up to ancient-timey quaintness, as it’s definitely evocative of certain other ancient games, but it’s too bad that these minor issues weren’t sussed out while the rest of the game was being given its coat of modern polish. It also feels a bit pricey for what amounts to a few discs and an attractive but simple board, though a historical abstract game was always going to be a niche product anyway.

Problems aside, Nika’s range of difficult decisions, built around careful positioning, coordination, and timing, allows for many triumphal moments. And not only because it feels like a modernized version of something the Greek nobles of yestermillenia might have played in their spare time, wagering slaves and amphoras of olive oil — though that absolutely adds to the appeal.

Posted on February 23, 2015, in Board Game and tagged Board Games, Eagle-Gryphon Games, Nika, The Fruits of Kickstarter. Bookmark the permalink. 1 Comment.

← XCOM: Board Game Unknown
Love and Hate in the 15th Century →