← Space-Biff! Was Recently Devastated
Print and Play (Oh My Darling) →

Darkest After the Dawn

“It’s like Among the Stars, but in space,” is how one of my friends jokingly summed up New Dawn, Artipia Games’ follow-up to one of our favorite games of last year. Of course, what he meant is that apart from the gloss — the same color scheme, a few recurring faces, and a setting that could best be described as a pan-galaxy alliance of alien races getting all passive-aggressive about building the best space station — New Dawn has pretty much nothing in common with Among the Stars. 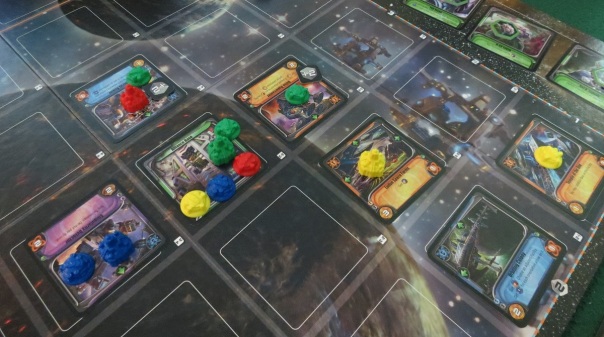 First forays into the sector.

It’s possible I just miss the old Alliance of Among the Stars, the postwar treaty of necessity that did a pretty decent job of explaining why the players were peaceably building space stations while still competing for victory points, a blend of cooperation, as you admired each other’s efforts, and pettiness as you filched the cards that would make their stations more impressive than yours. It was the sort of friendship you had in middle school, full of backbiting and squabbling and the occasional day off, but without which you were lunch meat.

New Dawn ostensibly continues that saga, though the story has taken a darker (and arguably sillier) turn. Apparently, those thousands of space stations, with their amusement parks and botanical gardens and matching sets of transportation hubs and turrets, have cost the Alliance a whole bunch of money. Who would have thought? Now, hoping to save an Alliance on the verge of collapse, different races blast into new sectors of space. Their goal: to discover economic, military, and scientific facilities; incorporate them into the Alliance; and then send military units to steal those same friendly facilities from their treaty-brethren.

Frankly, it’s a weird setup for a weird game.

If I looked like that, I’d be warlike too.

Leaving aside the fluff, New Dawn has all the right pieces to construct something interesting.

There are different races to control, each with different ways to advance their technology. And during your advancement through the sector, you’ll uncover all manner of abandoned (and not so abandoned) outposts, colonies, and structures that might be of use to the Alliance. This is where New Dawn shines, as you draw and select which facility to discover as you expand, whether stumbling across a Supply Depot for much-needed resources, a Research Institute to take a bonus action, or immense Refueling Vessels that permit you to build your MHQs, the mobile ships that let you set up bases and make attacks, at a discount. There are piles of facilities to discover, and finding precisely the right structure when you need it is as thrilling as ever exploration was.

All it takes to earn a facility’s main offerings is to be the first to explore it, but it isn’t until you take control of a structure — and hold it until the bitter end — that you’ll get its points. Additionally, upon claiming one of these facilities for the Alliance, you get to “orient” it, pointing these little green arrows at different edges of the board, where various bonuses are placed. These bonuses change each game, sometimes giving you additional victory points, resources, or even special chits you can discard for an edge in combat.

There are also powerful ambassadors to lure to your side and special contracts to fulfill for the Alliance back home, and between these and the different races, orientation bonuses, and heaps of facilities to discover, there are a lot of cool ideas swirling around New Dawn’s noggin.

No room for the three of us.

The problem is that it often feels like those ideas are as disparate as the Alliance apparently is, unable to coalesce into a functional whole. Instead of working in unison, these concepts are far likelier to collapse into an unwieldy black hole. Though instead of light, it’s fun that can’t escape this hole’s gravitational pull.

For example, unlike Among the Stars, there’s a whole lot of fighting that needs to be done. In a game like this, where combat is present but not outright encouraged, it’s possible to ignore it entirely, though the player most likely to win is often the one who went least harassed during the course of the game. And rather than figuring some more elegant solution to combat, after all the positioning of MHQs and turning in chits for combat perks, it all comes down to a wild roll of the dice. Which is to say, after a whole lot of work, it’s like hopping over to a game of Risk to roll for Argentina and hoping that you don’t suffer a massive setback that will have a rippling effect through the rest of the game. It’s technically functional, albeit flimsy like a spaceship made of tissue paper, and detracts from the game’s better elements. Namely, the exploration and construction.

Sadly, those elements sometimes don’t always represent themselves well either. Because the best bonuses are earned during exploration, construction itself, which only earns minor rotation bonuses and points at the end of the game, feels tacked-on and anticlimactic. The exploration itself feels fresh for a time, then proceeds to become samey and uninspired, the same resources and repeated actions appearing on the bulk of the facility cards. Speaking of the cards, most are riddled with microscopic text, impossible to read without getting up and leaning over the board, making this the most exercise I’ve gotten playing a game since a particularly vicious round of two-man Duck Duck Goose many years ago. And the turn order is of utmost importance thanks to those powerful ambassadors you’ll undoubtedly want to nab right away — though rather than being determined by bid, the first player will always be the person with the fewest bases. Which is a fine booby prize, but what happens when the leader is seated to that player’s left the entire game, and therefore gets second pick each round?

A sprawl of text.

Like far too many Kickstarter releases, New Dawn would have benefited from quite a bit more polish. It might be considered a case of death by a thousand splinters, but even without all those minor issues piling on, its most damning problem is that the decisions it presents are all too rarely engaging. It’s simply too easy to carefully construct a network of facilities only to suffer a terminal setback on a roll, or to stop drawing useful cards, or to end up going last and have all the best ambassadors taken by the time your turn trundles around.

In short, Among the Stars is an excellent game. Too bad New Dawn couldn’t live up to its legacy.

Posted on February 16, 2015, in Board Game and tagged Artipia Games, Board Games, New Dawn, The Fruits of Kickstarter. Bookmark the permalink. 3 Comments.

← Space-Biff! Was Recently Devastated
Print and Play (Oh My Darling) →