← Kemble Was Actually Just Some Dude
I Survived Quartermaster General → 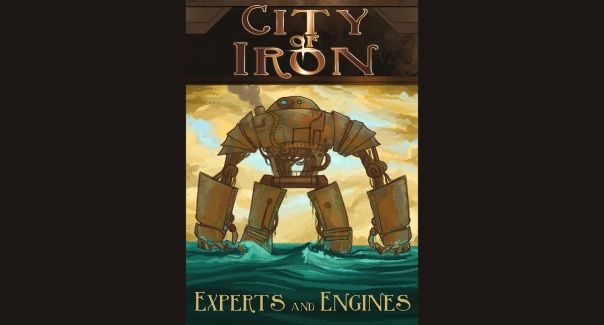 Today, you are privileged — privileged — to receive a guest review from Somerset, who is possibly Space-Biff!’s most dedicated reader. Today, she’s going to tell us about an expansion to one of her favorite board games, City of Iron, which we reviewed over a whole dang year ago, which makes this sort of a special event.

Always been convinced that srikas are the sure way to victory, but never quite been able to prove it in gameplay? Well, here’s your chance to show everyone your srika strategy is now totally viable. Experts and Engines, an expansion for Ryan Laukat’s City of Iron, spices up the game with four new elements. Each nation becomes more diverse, steambots arrive on the scene, Kraxian Pirates make their debut, and new buildings and towns are up for grabs. Take a look after the jump.

Some of the new character cards!

Several of the new military and citizen cards in each deck make the nations a lot more flavorful and distinct. Playing as the Humans? Get that new War Zeppelin out and attack a town with a free action then attack again somewhere else with your regular action. Strapped for cash? Make sure you have the Airship Pilot and use that zeppelin instead to gain three more coins. Bank! If you’re the Frog nation, gather up as many hammer icons as you can because with the Colossus you can use hammers as attack, or help pay for a new building using hammers with the Steam Drill. Remember that srika strategy I mentioned? Make sure to play as the Cresarians, buy up all the srikas you can, shepherd them together with that Srika Herder and get some extra money (for free), use the professor to trade science for even more gold (for free! again!) , then use your first official action to attack a town and use all that gold as attack. Bam! The Hogmen also become more wily thanks to a Bandit who steals coins at the end of the round and a Forger who extracts an extra coin when someone edges in on your market.

These are just a few examples of the new cards available, unique to each nation, making them feel more distinct, not only with more of the one-of-a-kind cards, but also with updated artwork to a few of the cards that are the same in each deck.

At the beginning of each new round, a steambot appears on the leftmost building in the array. Purchasing that building gets you the steambot to place at a later time on a building that produces goods. Ever after, each turn produces one extra good for the topmost good pictured on the building card. Neck and neck in the turnips market? Grab a steambot and increase your lead by one to gain the income and victory points that come from being top producer. Be careful where you put the steambot though, because once it has been taught how to garden turnips, it can’t do anything else. A couple of the nations are steambot-friendly and can, like the Gearist (pictured among the Humans a couple pics above), attract two steambots instead of just one; in a different deck, a citizen can reprogram a steambot to work at a different building, important in the late game when it would be more lucrative to be top hog in the silk market rather than in vegetables. 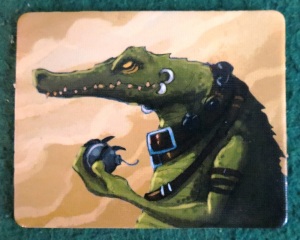 If I had one teensy tiny complaint against City of Iron, it’s that often when someone jumps into the lead, it can be hard to reign them in. Now you can even things up a little with pirates. Kraxian Pirates. The last person in turn order gets to place the pirates icon on top of their good of choice, depriving the person in the lead of their bonus income for a round. Usually it’s placed on whomever is ahead in victory points, or often in our games, whomever Space-Biff! cameraman Steve-o has a vendetta against for the night.

The Airdock and Cave Market are so far only available to those who backed Mr. Laukat’s Kickstarter, but these new buildings, labeled as the E Deck, are available for purchase by anyone from the beginning of the game, potentially influencing your entire strategy. There are also a few new buildings mixed into the A Deck. My favorite was the Armory, which incentivizes attacking by giving you a victory point each time you conquer a town.

This expansion is definitely worth adding to your base game. I give it seven srikas and five tentacles up!

Posted on September 27, 2014, in Board Game and tagged Board Games, City of Iron, Experts & Engines, Red Raven Games, Ryan Laukat, The Fruits of Kickstarter. Bookmark the permalink. 4 Comments.

← Kemble Was Actually Just Some Dude
I Survived Quartermaster General →