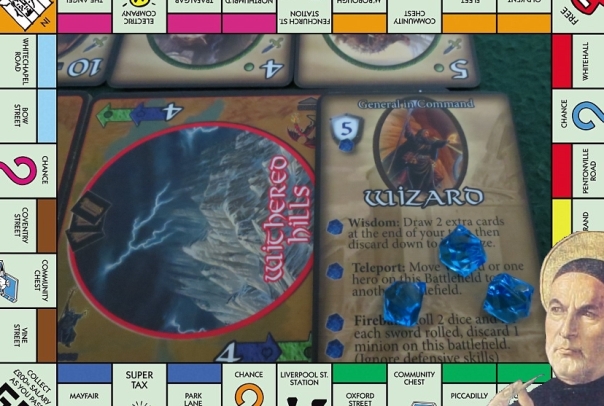 Was this a good year for board game expansions? I have no idea. There sure were plenty of them, including a bunch of interesting additions for Netrunner and the Pathfinder Adventure Card Game. Even so, when it comes to figuring out which expansions were my favorites this year, there’s hardly any contest.

An uprising cripples my expanding colony.

Before we get into what I liked about the Solo Expansion for Archipelago, I want to acknowledge that it was far from perfect. Of the 27 scenarios in its tiny card box, there were a few that depended far too much on the luck of the draw. And some that were simply unbalanced. And a few that were outright impossible. Put bluntly, I think many of the scenarios were included in order to justify this expansion’s existence, considering it asked solo players to drop fifteen bucks on an expansion to an eighty dollar game. It would feel like a ripoff if it only came with a measly ten scenarios, so they beefed up the number with a bunch of nigh-unbeatable challenges.

Even at 27 scenarios, there were still folks who argued that the original should have shipped with these cards. I can understand that feeling. It would have driven up the price by including a niche product that maybe one in twenty people to purchase Archipelago would ever be interested in playing, but I get it. Nobody likes having to spend extra money.

The point is, the Solo Expansion was awful for people who primarily play solo, because it meant the cost of getting some alone time with Archipelago was restrictively high, especially since you’d have to sort through all its scenarios until you found the handful that worked well. But for people like me, the folks who bought Archipelago for its multiplayer native-oppressing badness, this expansion was a revelation. It took one of the best hidden-objective multiplayer games of the year and transformed it into an excellent solo option that under the right conditions ran smoothly and provided a tight, challenging experience. Some of my best solo experiences of the year came from watching my beleaguered colony wither in the face of endless rebellions, shortages of fish, and the eventual problems of overpopulation. And although I didn’t succeed often, the occasional thriving port-city was one of the year’s most satisfying triumphs. 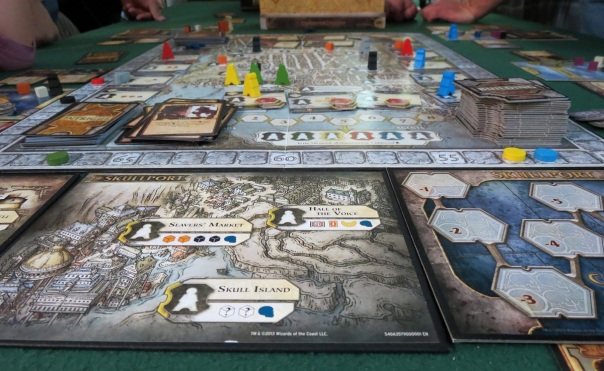 #4. Lords of Waterdeep: Scoundrels of Skullport

The corruption in Scoundrels of Skullport is such a comfortable fit with the political machinations of the guilds and influence-mongers of Lords of Waterdeep that it’s almost a surprise the original game didn’t include it. Your agents were never exactly performing benevolent acts, considering they were in the business of hiring thugs and thieves and setting power grabs into motion down at the harbor, but the addition of Skullport and its various shadier paths to dominance brought entirely new dynamics to the table.

For one thing, corruption was no big deal when taken a little bit at a time (no urban center earns the title “City of Splendors” for the forthrightness of its politicians), but as your lord’s hands got dirtier, he brought everyone else who had dabbled in under-the-table dealings down into the muck with him. Which wasn’t a big deal when everybody was equally filthy; but all it took was one sparkly-clean buffoon to convince the city he had their best interests at heart. Just because he didn’t trade slaves down on Skull Island! The nerve.

If that wasn’t enough, the Undermountain module also added harder quests that brought greater (and less predictable) rewards, and there was a six-player expansion in case you had a lot of time on your hands and weren’t as interested in balance or planning. All in all, Scoundrels of Skullport breathed new life into a game that was always at its best when it was constantly surprising you.

Pictures of Core Worlds never do the game justice.

Core Worlds is one of my favorite deck-building games, despite exactly two flaws. First, the endgame can get a little tedious and predictable, and isn’t quite as cataclysmic as “space-barbarians space-invade space-Rome” ought to be. Second, the early stages tend to unfold too similarly, with players usually opting to skip the outermost worlds in favor of setting up to conquer the vastly more valuable planets that appear just a few rounds into the game.

Galactic Orders fixes all that by adding, ahem, the galactic orders. These are Rome’s old powers, so to speak, the cults and senatorial families and guilds that don’t intend on joining the space-empire’s decline and fall. Rather, they intend to thrive, and plan on allying themselves with your barbarian horde in order to do just that. With one deft change, your starships and mutant infantry and warbots (pronounced “WAURGHBOT” for best results) are no longer solely useful for invading planets. They now also curry favor with one of the expansion’s six galactic orders; favor that can be exchanged for certain… privileges. Where an early-game Cyborg Unit might not have held any appeal before, it now tickles the Science Guild’s sensibilities and convinces them to help you research newer and better soldiery. Since every unit now confers these additional benefits, the drafting portion of the game just got that much more demanding.

Just like that, one of my two problems with Core Worlds has been erased with all the efficiency of space-artillery incinerating space-Rome’s outposts.

#2. Darkest Night: With an Inner Light

If you’ve been following Best Week 2013 here at Space-Biff!, you already know that Darkest Night was my second-favorite solo/cooperative game of the year. It therefore stands to reason that its first major expansion, With an Inner Light, should be my second-ranked entry on this list.

You may have noticed a theme to these proceedings. For an expansion to really stand out, it isn’t enough for it to merely add more, in the sense of extra cards and character classes and whatnot. Those sorts of expansions are fine, and if the base game was good I’ll probably pick them up, but they rarely command my attention. Rather, the expansions I like best are the ones that refine or even redefine their base games, just as Archipelago’s Solo Expansion totally transformed the experience, Scoundrels of Skullport added the excellent corruption mechanism, and Galactic Orders gave all its cards additional value.

Which is why With an Inner Light is such a great expansion. It not only adds more, giving you four new hero classes and some new artifacts and items to scrounge up; it also adds an entirely new quest system, and thus an entirely new layer of problems for your heroes to deal with. Instead of just dealing with the necromancer and however many blights he’s infected the kingdom with, you might also have to stop some evil tower from being erected in the swamp, lest doomstuff happen. Or stop a pack of looters hiding in the mountains from taking advantage of the deteriorating situation. Or stop a vampire from spawning new vampires. Horrible stuff like that.

It’s a simple addition to a simple game, but it refines the experience with alchemical expertise. And that’s exactly what I want from an expansion.

Just a sampling of the new toys.

Summoner Wars’ occasional imbalances are somewhat inevitable considering the sixteen asymmetrical factions that fight for control of its fantasy landscape. Even so, it’s a shame that Plaid Hat Games is too small a company to consider releasing a “legacy edition” to fix some of the game’s problems, especially the earlier ones — the rather powerful Guild Dorks, the meta-game-ruining catch-up events, etc.

The release of the second summoners — of which there have been six so far, spanning the Guild Dwarves and Cave Goblins, Phoenix Elves and Tundra Orcs, and Vanguards and Fallen Kingdom — has reinvigorated the game for me, especially since these additions are essentially a legacy edition in their own right, shoring up factional weaknesses, empowering common units against champion-heavy play, and not a catch-up card in sight. Best of all, these aren’t reinforcement packs. Each deck is a ready-made fighting force in its own right, so if you’re curious about Summoner Wars, it’s possible to pick up two of these, assemble your own board, and get to playing.

I could have written a best-of-2013 expansion list composed of just these packs, but then it would have been an uncomfortable six entries long, not to mention it would have ignored the other awesome titles listed above.

Those are my 2013 picks for best expansion. What are yours?

Posted on December 29, 2013, in Board Game, Lists and tagged Best Week!, Board Games, Space-Biff!. Bookmark the permalink. 6 Comments.