← Board Games & Me: The Lost World
Summoner Wars Mega #4: Cloaks vs. Benders → 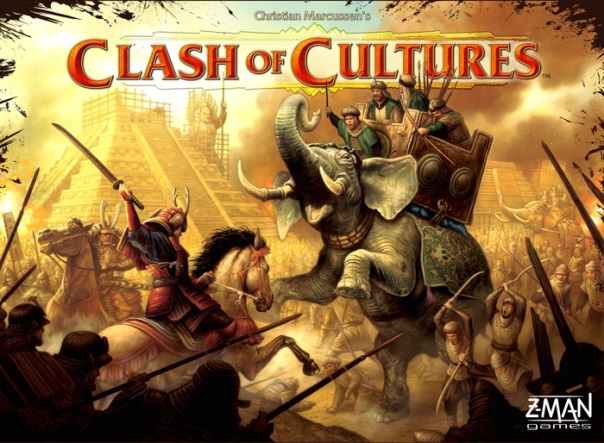 The thing is, I don’t really like Sid Meier’s Civilization series. I can see the appeal — crud, half the game’s bullet points sound like they were plagiarized straight out of the “This Should Appeal to Dan” playbook. But for whatever reason each Civ experience leaves me wondering what part of my soul is missing and wanting my thirty dollars back. So I was greatly surprised when I genuinely liked the board game version (this one). I didn’t play it too many times because it had some problems, most notably a very long playtime, but it still captured a lot of the things I liked about the Civilization series.

Now I’ve found a Civilization-type game that I love, courtesy of Z-Man Games and Christian Marcussen, designer of the marvelous (so I’m told) Merchants & Marauders. It’s called Clash of Cultures, and it’s one of the best things I’ve played all year. And I don’t mean that as a joke, considering it’s only the eleventh day of the year, I mean from the entire previous year. Find out why below.

Here’s why I love Clash of Cultures:

Now, I don’t want this to become the Rag On Sid Meier’s Civilization: The Board Game Review, but a quick look at the back of its box reveals a list of components as long as, well, not quite as long as my little finger, but it’s in very small print. It’s got civilization sheets, plastic connectors, map tiles, armies and scouts, cards of the combat, setup, government, tech, culture events, and wonder varieties. It has markers for military tech, cities, buildings to expand those cities, disasters, culture levels, great persons, villages and huts. There are dials aplenty, and so many counter tokens you could choke a boa constrictor if you were so inclined. I’m also pretty darn sure I missed something.

There’s nothing wrong with that. I bought the game largely because I looked at that list of components and thought, “Bazooks! I can do anything in this game!” I knew going in that with so many components it had no choice but to suffer from some fiddliness, some disconnection between its myriad tidbits and mechanics, some imbalance. That’s to be expected, and with a game like that, often embraced. If you want to do a thousand things in your game and can overlook some of the problems I’ve skimmed, you could do a lot worse than SM’s C:TBG.

But Clash of Cultures is the one that I’ll be bringing to the game table night after night, because it’s ridiculously easy to set up, teach, learn, and play. It makes the task of transforming the unexplored, unconquered map pictured above into the civilized, fought-over map pictured below such a breeze that halfway through the game you’ll be so engrossed in the running of your miniature empire that you’ll practically forget all the little mechanical things you’re doing to make it happen — you’ll just do, without needing to consult the rules yet again or bug the game owner about how combat works.

Don’t believe me? I’ll prove it!

Three civilizations (and some barbarians) populate the land.

The order of play couldn’t be simpler. One round consists of each player, in turn, taking three actions. Once three rounds have passed, you take a brief “Status Phase,” which we’ll talk about later. For now, let’s look at the actions you can take — and remember, you get to take three of these per turn.

You begin with a single City and a Settler, and right away we can talk about the game’s two simplest actions. When you Move, you get to move up to three units or groups of units (up to 4 armies may constitute a group, no limit on settlers or ships) one space. Easy. You can move units farther by taking the Move action multiple times on your turn, keeping in mind a couple of terrain restrictions: if  you move a unit onto a mountain space, it’s done for the turn; and if you move it onto a forest space, it can still move, just not into a battle. Once you have ships you can move them as far as the sea extends (so long as you aren’t blocked by enemy ships), letting you shuttle up to two units per ship with relative speed.

Once your Settler has found a nice place to settle down, you can Found a City by simply removing him and placing a city figure in that space.

If you’re thinking that this sounds too simple, don’t worry — it gets a bit more involved.

A powerful city, happy but under attack by invisible forces.

Above you can see a fully-developed city, which highlights one of the cooler design decisions of Clash of Cultures: when you expand your cities, you add actual tiny city districts to it, which increases the size of your city (both physically and in gameplay terms), and gives you some sort of minor perk there. You interact with your cities by taking the Activate City action, which lets you take one of three sub-actions. The first one is that you can choose to increase your city size by adding one of those districts, though there are some limitations there — you’ll need to have researched the right advance, and you can’t increase any of your cities beyond the number of cities you own in total. This gives you some agonizing decisions right at the beginning of the game: do you research Fishing, which will let you build Ports and, therefore, ships? Or do you pick Myths, which will let you add Temples and their boost to your civilization’s mood and culture? If you’re near some barbarians, maybe you should go with Tactics, which will give you defensive Fortresses. If you’re like me and can’t abide illiteracy, you’ll learn Writing to allow for research-boosting Academies.

Each additional district increases the “size” of the city by one, and size matters, because when you activate a city to take one of the other two Activate City sub-options, to build units (armies, settlers, or ships) or collect resources, you get to build or collect as many units or resources as your city is large. So if you’re trying to raise a full-force army of four, a big metropolis can pump them out in a single turn, while a city that’s just starting out will take quite a while to get everyone together.

That little smiley face token up there isn’t just a subtle Watchmen reference, it’s an actual (awesome) mechanic. Cities have three mood states: angry, neutral, and happy. When a city is happy, it counts as +1 size when you activate it and collect resources or build units; when it’s angry, it always counts as size 1 for those same actions, no matter how big it is. If you activate a city more than once per turn, your city will decrease in mood to reflect the attitude of the citizens to being taxed or drafted too harshly. Fortunately, you can undertake Civic Improvement, in which you spend mood tokens equal to a city’s size to move its mood up a level. This means, of course, that it can be incredibly costly to make a huge city happy.

Finally, you might be looking at the above picture and thinking, “Silly Dan, putting in a city piece of the wrong color.” NOT SO, good reader! You can also commit Cultural Influence to have one of your cities attempt to infiltrate its filthy customs, religion, architecture, philosophy, and values into a foreign society, indicated by swapping one of their city districts for one of yours. They still control it, but it blocks that city from spreading its own culture, and matters when scoring at the end of the game.

In summation, what we have above is a size-5 city that counts as size 6 when building units or collecting resources (because it’s happy) that has been infiltrated by the blue nation’s heretical religion.

The Player Board, resources on top, Advances below.

Now for something simpler: Advance. This is the action that lets you spend your hard-harvested Food (or, less often, your hard-thought Ideas or hard-minted Gold) to research a new technology. It starts simple, since you must research the top advance in any given category to unlock the options below, and three of the categories are government types with radical benefits — though your culture can only have one type at a time.

These unlock all sorts of options: free actions that come at a price, navigation that lets you sail around the entire map, trade routes that give you free food but require you to be uncomfortably close to other nations, steel weapons for a bonus hit in combat against enemies who are still using bronze, the ability to build wonders for some great perks and a neat pile of extra points at the end of the game, irrigation to block famine events that would otherwise set you back significantly, or a priesthood that spends their entire life learning science instead of making babies. There are a few obvious choices, like the early technologies that let you unlock certain buildings or that let you move your armies, but for the most part these allow you to customize a truly unique culture, especially since it’s unlikely that you’ll research even half of them in a single game.

Some technologies have a yellow or blue outline on the board — these indicate advances that will make your people happier or more cultured, thus giving you mood and culture tokens. Eventually these will also prompt events, like barbarian invasions, volcanoes, the above-mentioned famines, or mass migrations. 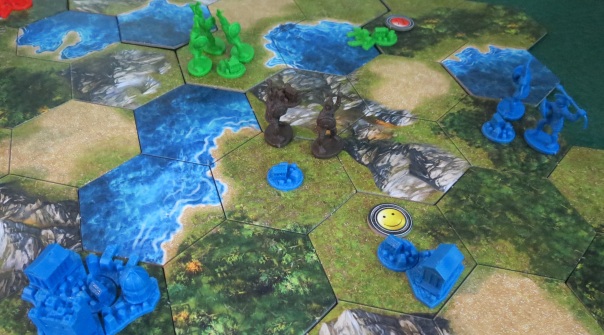 And those are all the actions! Advance, Found City, Activate City (with Build, Collect, and Increase City Size sub-actions), Move, Civic Improvement, and Cultural Influence. Baby, you’ve got a stew on.

Combat is also about as simple as can be. Both sides roll a number of dice equal to the number of armies they’ve brought, then divide by five. The result is the number of hits you inflict. You can also play action cards to modify a round of combat, giving you some control over the proceedings. It’s simple and doesn’t slow down the game while you fight battles.

Once everyone has taken three turns, each consisting of three actions, you move onto the Status Phase. You check to see if you’ve completed any objectives, which are printed on special objective cards that you pick up over the course of the game. Then you get a free advance, draw one action card and one objective card, optionally destroy a size-1 city in exchange for a single gold (which can be used 1:1 for any other resource), and redetermine the first player.

That’s it. After six Status Phases, you count up your victory points — ½ for each advance, 1 for each city-piece, 2 per completed objective, 5 per wonder, and X from some events. Highest points makes the winner.

Why Clash of Cultures is the Best:
+ It’s simple, but has depth
+ It plays surprisingly fast
+ Not too fiddly
+ Many routes to victory
+ Good balance of multiple builds

The Obligatory Downsides:
– There are no elephants
– The Board Game Box Review gives its packaging ★
– Unique starting civilizations could have been cool, I guess

That’s the beauty of Clash of Cultures: it’s so easy, plays so fast, allows for so many different civilization designs, and is so effortlessly compelling, that it’s easily one of the best games I’ve ever played. It’s Civilization without the excruciating playtime and overwhelming and fiddly options.

Posted on January 11, 2013, in Board Game, Reviews and tagged Board Games, Christian Marcussen, Clash of Cultures, The Board Game Box Review, Z-Man Games. Bookmark the permalink. 18 Comments.

← Board Games & Me: The Lost World
Summoner Wars Mega #4: Cloaks vs. Benders →