← I Am Alive. Am I Satisfied?
Celebrate Space-Biff! with a Contest! →

Riding a wolf into battle against evil!

Look, I’m going to drop any pretension of objectivity here. I love Intrusion 2, a brilliantly fun little romp from Aleksey Abramenko, author of Intrusion 1 (I assume). And I’m going to tell you why, in a sonnet:

Now I’m using the wolf to slay an electrosquid!

No time for sonnets, because

Consider this: You might not be sold when your little commando, complete with ridiculous red ninja headband-thing, drops behind enemy lines and starts junking robots and mulching goons like it’s going out of style, but once the wolf riders make their entrance you’re going to perk up. And then once you take out the rider, you’re in for the real treat: a little arrow appears above the saddle and announces “IN”. Yes, it’s an invitation to ride the beast, to use its claws and jaws against the very thugs that caged and domesticated this majestic creature. Minutes later, you and your wolf-pal are leaping to ledges two stories high, plowing straight into squads that earlier you would have battled at a distance, and plucking electrosquids (previously worrisome!) out of the sky.

And that’s within the first two levels. You’re still firmly in demo territory here. Oh, and I should mention that the demo’s great.

The physics in Intrusion 2 aren’t only there to animate your commando’s superfluous scarf, though they manage that too. Rather, all the clutter you’ll encounter, from guns and boxes to defeated enemy robots (okay, and organic bodies too), remains on screen. I’ve seen a few people complain that this can make grabbing pickups hard—and that’s true, when you want to grab a health orb that’s buried under two severed electrosquid tentacles and a pile of shipping crates—but that’s a minor quibble.

The physics remind me a lot of another indie gem called Cortex Command, which also featured lots and lots of wreckage on screen, left behind by exploded enemies and dropped weapons and such. Now, if you’re thinking that comparing Intrusion 2 to Cortex Command is a lot like comparing durians and pawpaws, fine, here’s the thing: since all those bits and limbs have actual volume, you can jump on them to reach high ground, or shoot or push them into enemies, or use them as cover in a firefight, or avoid them when they’re thrown at you by a mech with a grappling-arm, or throw them back once you’ve commandeered that same mech prototype. And those same physics are tossing the players around too—enemies go flying, you’re hurled high into the air by a sustained cannon blast, and explosions turn stacks of crates into crate-stack-sized shrapnel bombs. With so much havoc, who cares if occasionally you need to tunnel through the sizzling remains of a battlefield to pick up a couple double-barreled machineguns? 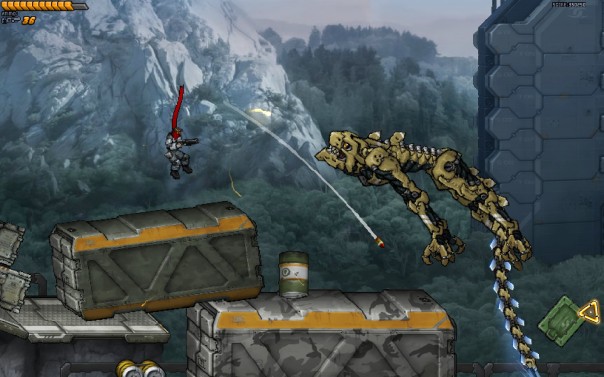 3. The Gameplay is Tight

By that, I mean you’re always in control. The combat is intense and kicks up an impressive spectacle, but with a bit of attention you’ll never be unsure where you are or what you’re doing. And you’ll always be able to seize control and redirect your luck. Enemy mech grabs you and is about to slice you in half with his eleven-foot sword? You can escape that. Backed against a wall by a robo-puma? There’s a way out. Well, probably.

And that’s just one tiny aspect of Intrusion 2’s appreciable gameplay. Not only are your movements and shoots and jumps fully and easily within your control, but you also have a neat selection of weapons, not too few yet not so many that you’ll be left standing around with analysis paralysis trying to decide which to use (well, maybe Space-Biff! staff member Adam would, but that’s just his thing).

Getting chided by the first boss for blowing off his frontispiece gun (pictured left).

There are three bosses in Intrusion 2, and none of them represent some stodgy duel where you stand and glower at each other for twenty minutes before one of you pops the other in the arm, announces victory, and goes home for a warm bath. Instead, these are enemies that you’re going to have a knock-down drag-out battle to the death with. They all feature multiple stages, one devastating attack after another, and a healthy dose of attitude.

The first boss starts by toying with you, ripping down the rope-bridge you were happily bouncing across and then attacking you with deployed soldiers, pounding fists, and a machinegun cannon. Moments later he’s chasing you across an ice bridge, hammering away at it to send you plummeting into the icy chasm below, before finally reaching solid ground and doing his darnedest to pick you up and blast you while you throw everything you’ve got at the cockpit. It’s hectic, and it makes up an entire level’s worth of fights.

And all three bosses, especially the appropriately nightmarish final boss, are like that: actual battles, complete with multiple phases and checkpoints.

Battling two mechs with the gun you ripped off of a previously defeated mech.

This might sound silly, and heaven knows it’s some folks’ complaint against the game, but I’m glad Intrusion 2 is so short. It took me just under three hours to beat, and I was never once bored. Not for a single second did my mind wander or my attention waver. For those almost-three hours, I was completely and totally hooked, focused on dodging and shooting and trying to figure out how to best use the new mech suit I had just commandeered, or how to effectively take down two robo-pumas, or if I could get the ice piranhas to chomp on my enemies—which is to say I was too busy enjoying the game’s satisfying variety to wonder if maybe I should study German, or play something else, or eat lunch.

I’m not saying that more wouldn’t be better, but I really don’t believe its brevity does the game a disservice, and I’m hopeful that Intrusion 2 will earn enough cash to warrant an Intrusion 3. 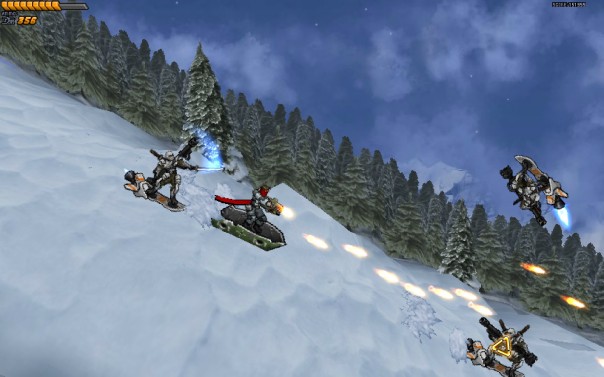 Boarding on some robo-wrecking while battling cyber-ninjas. The good life.

No, really, they do, and it’s the best recommendation I can give. From snowboarding down an icy slope on part of the hull of an enemy dropship while battling ninjas and robotic snow-worms, to hopping across rocks over lava while blasting gunfire at an enemy high above you, to assaulting secret compounds with the enemy’s own hardware, Intrusion 2 never lets up. It may burn a quarter as long as some other platformers, but that only means it’s burning four times as bright, and it’s nothing but fun and spectacle along the way.

My final recommendation is that I recommend it with finality. And if you’ve arrived here from some other site where the reviews are skippable and the scores omniscient, I give Intrusion 2 a 131.4ß on the revered Heinglemeyer Scale.

← I Am Alive. Am I Satisfied?
Celebrate Space-Biff! with a Contest! →