← Risa Ascending
Ophthalmology Is Not an Option →

Not every game is about the same thing. Take deck-builders. In many cases, maybe even most cases, deck-builders are about merciless optimization and combo-building. You start with a deck of cards. One by one, you add better cards and prune away the dead weight. Sometimes your final deck will be even leaner than what you began with. At the very least, it will perform to greater heights.

Too clever for its own good. Not unlike the world of art speculation and exhibition, come to think of it. Not that that’s a commentary based on any firsthand knowledge. For all I know, the world of art speculation and exhibition is entirely sensible. It’s only because of games like Reiner Knizia’s Modern Art and Art Decko that I have any reason to think otherwise.

In Art Decko’s case, the world of art speculation and exhibition comes across as a chimera of affluence and incest. You purchase art because you have money, which leads to more money and therefore more art. There’s no objective to any of it, apart from abstracted victory points. Unlike in Modern Art, where your goal was to become as rich as possible, Art Decko only provides a rough alignment between wealth and winning. To some degree, the point value and cash value of paintings improves hand in hand. But not always. Sometimes those values stagger, one increasing without the other. In the case of gold, its point value plummets as more of it is acquired. Unless wealth translates to holding the finest collection when the game closes, it holds no intrinsic value.

Accordingly, it’s a very weird game to describe. There are two types of cards: gold, which can be spent to purchase either art or more gold, and art, which can also be spent, but which exists principally to generate ephemeral value in victory points. Gold cards are more familiar, paired as they are with single-use abilities that temporarily increase their value — to buy a painting, perhaps, or buy gold, or pay some portion to hang a painting in a museum exhibit. Using such an ability also removes the gold from play forever, as if by some strange alchemical transaction.

Art cards, meanwhile, defy the usual descriptors. Unlike other deck-building games that emphasize process — Dale of Merchants, Valley of the Kings — art cards aren’t associated with abilities. It’s easier to think of them as colors or suits instead of as discrete cards. There are five: impressionism, surrealism, art nouveau, Renaissance, and pop art. You may as well conceptualize them as blue, green, yellow, orange, and pink. When you purchase something, its corresponding type increases in value. When you exhibit a piece, the same thing happens but with more gusto. Over the course of many purchases and exhibitions, the value of these types, both in spending power and victory points, gradually ticks upward. One type of painting may soon become so valuable that everybody pounces on them the instant they appear for sale. This, naturally, drives their value even higher. These bubbles never burst, but exist as perpetual energy machines that run until the game ends. When that happens, the winner is derived from both the points they earned from exhibitions and the value of their decks. It’s very mathy, and very abstract, and not entirely unpleasant. 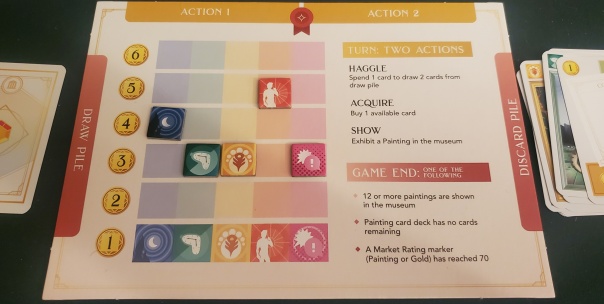 Here’s an example of all three things. When you exhibit a painting, you’re making a tradeoff. Your painting hangs in the selected museum and earns a few points, while also depriving you of its availability. (Again, not all that unlike entombing cards in Valley of the Kings or stocking the market in Dale of Merchants.) The value of its type increases, and there’s also a chance that you’ll unlock a special scoring tile.

But this trade-off also removes that card from your collection, thereby depriving you of its score. The entire game becomes a search for missing variables. If you exhibit this painting, are you making enough points from the other cards of its type? Or are you handing somebody else more points than you’re giving yourself? Is the slight advantage in exhibition scoring to your benefit, or have you bumped somebody else’s collection up a rung? Is there an off-chance that you’ll unlock that scoring tile, and, if so, will it benefit you more than everybody else?

With so many inputs to consider, it isn’t long before these variables swirl together. There’s a reason even heavily abstracted games lean on the mnemonic cues bestowed by their settings; without the advantage of context, Art Decko becomes a muddy whirlpool of competing considerations. As I noted earlier, this never becomes unpleasant, per se. It’s more that it becomes bewildering. Either you enjoy its moment-to-moment gains, the movement of cards, the occasional crisp play — its process — or the tethers snap and you float away on a fog of disinvestment. It’s a remarkably easy game to zone out on.

For me, that disinvestment takes a particular form. Rather than enjoying myself, I settle into the acedia of someone who doesn’t understand a topic and doesn’t care to understand. Art Decko doesn’t speak to me. It isn’t incisive; it doesn’t lampoon; it doesn’t help me enjoy math so much as resent its formless variables. All that remains is raw process: taking cards, shuffling cards, placing cards. Again, this isn’t entirely unpleasant. Sometimes, I shuffle cards as a form of idle relaxation. The same effect takes hold here. Art Decko leaves me idly relaxed and little more.

Posted on September 21, 2022, in Board Game and tagged Art Decko, Board Games, Rio Grande Games. Bookmark the permalink. 5 Comments.

← Risa Ascending
Ophthalmology Is Not an Option →