They See Me Rollin’

When I’m bored, I add more hours to Spelunky. When Jamey Stegmaier is bored, he designs roll-and-write games. That’s the origin story for Rolling Realms, born of COVID downtime and one of the genre’s greatest strengths: the ability to be played by large groups, even when they don’t occupy the same room.

To my surprise, it’s rather charming.

As a game, Rolling Realms doesn’t break new ground. While everyone else is busy looking for the next way to propel the roll-and-write genre forward (hint: the answer is not “make it complicated”), Stegmaier goes the other way. Mechanically, there’s almost nothing surprising here. If anything, the concept has been pared down to its merest sliver. Or distilled into its finest essence, if that seems more complimentary. One person rolls two dice. Everyone jots those identical inputs onto their own cards. Somewhere along the way, everyone’s contrasting priorities, goals, and oversights lead them down divergent paths. Scores are tallied. Then you do it again until the game ends.

The key to the game’s charm is found in its particular brand of miniaturization. Every card is its own compression of a title designed and/or published by Stegmaier himself, like a stack of boxes transformed into a tray of bite-sized chocolates. Of the eleven in the box, some reproduce their subject matter only superficially. There’s Wingspan, which has little to do with Elizabeth Hargrave’s game about collecting and sorting birds, and instead has something to do with sequences of increasing numbers. The safely-titled The Society, standing in for Red Rising, mostly reminds one of how irritating it was to splay that game’s cards without them jostling into the margins. The card for My Little Scythe exists mostly to miss the opportunity to call it My Little My Little Scythe. 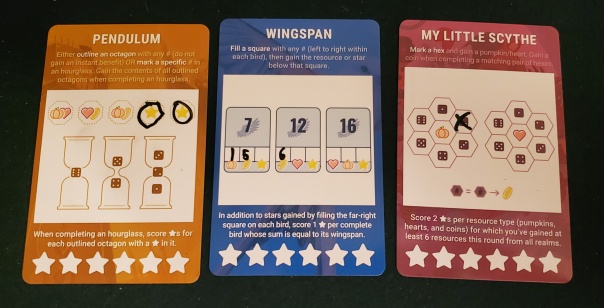 Much of the fun comes from seeing familiar games get repurposed.

The others are more faithful deconstructions. In some cases, they even expose the heart of their original game. Scythe, for example, is not about stomping mechs, but about balancing positive and negative resource paths. Every card in Rolling Realms provides resources, adorable pumpkins, hearts, and coins that can be spent for various power-ups, such as extra numbers or adjustments to a die’s value. Scythe is the only card that asks you to expend resources, recalling that game’s iconographic feast of incomes and expenditures — and how its backdrop of warring empires was something of a red herring. The same goes for Euphoria (balancing the maximum value of your workers, themselves also dice), Pendulum (filling up hourglasses), and Charterstone (something about opening boxes). The baldest exposé of them all is Tapestery. Billed as a civilization game, Tapestry focused more on playing Tetris with your capital city’s structures than on technologies or culture. Suitably, the Tapestry card in Rolling Realms is a polyomino minigame, asking you to buy shapes to black out rows and columns.

If I sound snarky, rest assured it’s all in good humor. If anything, this reduction is much appreciated. Rolling Realms is Stegmaier at his most self-aware. Designers might consider it an exercise in excavation. If your game didn’t have the benefit of stylized artwork, interacting systems, or evocative verbs, what would it look like? Stripped down to three all-purpose resources and simple d6 inputs, what one concept is your game asking players to actualize? Of course, this limits games to mechanical constructs, devoid of soul or statement. Or perhaps it exposes certain games as homunculi to begin with. This lessens neither the deconstruction nor Rolling Realms itself. Like asking a playwright what their one-act is supposed to say, it’s a line of questioning that’s equally crass and illuminating. What is Scythe? A resource conversion game. Between Two Castles? A balancing act. Tapestry? Shoehorning landmarks in among the residential districts.

The glow! The glow!

The excavation is so sharply done that it’s almost a bonus that Rolling Realms functions as an actual game. Let’s not sell it short: this is one of the better simple roll-and-writes. It’s fast and easy to learn, and does exactly what a roll-and-write should, in that it gets everyone to put their heads down and do some minor optimization puzzles for twenty minutes.

That said, it’s also important to note that no small measure of its strength comes from knowing the games being deconstructed. There are two I haven’t played; they’re also the two I’m least interested in when they appear. If anything, I wouldn’t mind seeing some of my favorite titles freeze-dried in this fashion. What would a Rolling Realms version of Tigris & Euphrates look like? Nemo’s War? A Study in Emerald? Faiyum? Are there titles that would be considered unadaptable until an auteur figured it out? Are economic titles more suitable than directly competitive games? Is there an underground market for adaptations of After Pablo and Leaving Earth? Libertarian designers who would craft a troublesome Pax Emancipation in which the footnotes outweigh the gameplay? One wonders.

But I stray. Rolling Realms sparks the imagination as an exercise, but it’s no slouch as a reduction of familiar experiences. Now, can someone please adapt Inis?

Posted on May 30, 2022, in Board Game and tagged Board Games, Rolling Realms, Stonemaier Games. Bookmark the permalink. 5 Comments.