You begin as a toddler stacking alphabet blocks. Thirty-something years later, you snap awake with a gray popsicle stick in hand, a sprawling mess of pillars and roads and cars standing before you, as attractive as it is fragile. Are you an urban planner? Some asphalt deity of the highway? Doesn’t matter. The only important thing is that your hands don’t shake.

Welcome to Tokyo Highway. Buckle up.

The best thing about Tokyo Highway is how it looks halfway through a game — and I mean that as both an underhanded compliment and an actual compliment. Skyscrapers rise from the midst of a web of interchanges and belt routes, columns stand off-kilter, roads wend their way aslant, cars balance precariously on the verge of clattering, no louder than a dropped Tic Tac, to the level below.

More than most stacking games, the pieces are unusually dainty. The highways are popsicle sticks, albeit of the kind that, encased within frozen sugar water and consumed too eagerly, would bend and go splintery in your mouth. The cylinders that must be stacked are weightless, slidey things, prone to jittering out of alignment. Even the faintest tremor in the fingers can send the whole thing toppling.

It’s this fragility, this tendency to break apart when somebody’s knee nudges the leg of the table, that gives Tokyo Metro both its challenges and its frustrations.

It works like this. Everybody is constructing their own highway, driven by their own color-coded fleet of automobiles. Your goal is to be the first to deploy that fleet in its entirety, but cars may only be placed when your highway passes over or under a rival’s highway.

That’s the basic idea. At a deeper level, it’s important to remember that each leg of your highway needs to be changing elevation, up or down by one cylinder. Highways continue in one direction, only forking at junctions — the yellow cylinders — which are rarer but let you tinker with the neighboring elevation changes more radically.

The really important thing to remember is the placement of cars, which is strangely persnickety for a game that’s otherwise so blissfully simple. Passing over a road only awards a car if no other road has traveled over it previously; the same goes for traveling under a road, though in reverse. Going both over and under with a single stretch of highway is the ideal. Naturally, the danger of such a daring addition is that you’ll need to lean forward, popsicle stick pinched tight (but not too tight), and somehow sidle it into the gap between roadways. Knock any pieces to the table, and you’re required to put them back — and hand over some of your precious construction materials to the wronged player.

What jerk put all these buildings right here?

That’s assuming your mistake hasn’t made the city resemble a war zone. While most of the time only two or three pieces will fall, it’s common enough for those roads and cars, as airy as hollow bird bones, to clatter into an unrecoverable mess. What happens then? The rules are silent. We took that gap to mean that we were intended to stare in wonderment. Also to call it and start over again.

Is it a gimmick? Oh, absolutely. But it’s the sort of gimmick with an easy appeal, especially once the city begins to take shape. As I mentioned before, that middle portion of each play is when Tokyo Highway becomes most interesting. All those roads and junctions provide ample opportunity for overpasses and sudden drops and the occasional bonus off-ramp, but not quite so many that you risk making Godzilla blush with envy.

Of course, half the fun of a stacking game is the moment when the edifice finally topples. Once again, though, the pieces are so insubstantial that the moment of demolition doesn’t bear much in common with the collapse of, say, Rhino Hero’s high-rise. There should be a moment, frozen in time, when the thing might fall or might not fall, a hovering infinity between certainty and uncertainty, followed by that distinctive lurch in the stomach as the tower becomes a heap. In Tokyo Highway, failure hews closer to dropping an open box of toothpicks. 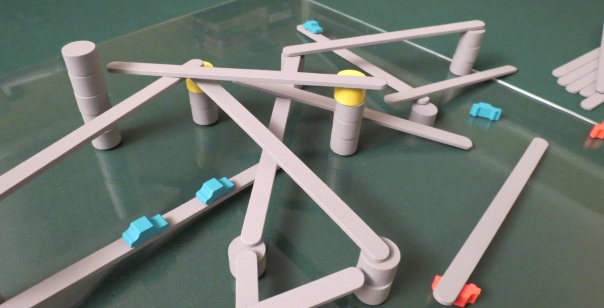 Sadly, none of our highways were rated for earthquakes.

The result is something of an odd duck. At its best, it’s utterly lovely, thanks both to its soaring table presence and the burden of its decisions. Should you risk a junction with a sharp grade to dive between those nearby highways? Or play it safe and go over both? And will either choice provide an easy opening for a rival’s road? It’s surprising how much there is to consider. Doubtless it will prove enough for some.

But personally, it’s not quite what I want from a stacking game. With more than two players it can be deliberate to the point of slowness, and its collapses are often anticlimactic. Despite its distinctive appearance and clever hook, I prefer my adult building blocks with a bit more heft.

Posted on January 11, 2019, in Board Game and tagged Board Games, itten, Tokyo Highway. Bookmark the permalink. 10 Comments.