Not Exactly an Al Swearengen Simulator

For those of us who fit into the Venn diagram encompassing both those who love board games and those who love Deadwood, Saloon Tycoon seems like a no-brainer. Not only could we get up to our elbows in all the brutality, back-stabbing, and profiteering that goes with the territory, it would also go a long way towards legitimizing our extensive Al Swearengen vocabulary. Ya hoopleheads.

Unfortunately, while I wrote earlier this week about a Kickstarter title that could have used some more publisher oversight but still turned out okay in the end, Saloon Tycoon provides the opposite example. As in, this particular batch of cornbread needed a few more minutes on the stove. 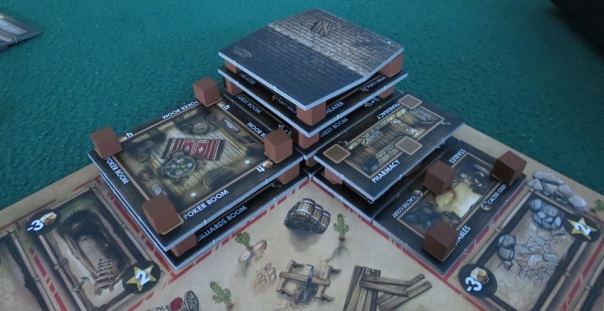 Building an actual casino from the ground up seems nifty. At first.

If nothing else, Saloon Tycoon grabs the eye. For one thing it’s an absolute table-bear, gobbling up as much real estate as its stomach can handle before regurgitating it all back up again. Then again, without all that room to spread out, it wouldn’t appear nearly as fabulous. Each player’s saloon grows outwards and upwards with each new addition, all those floors for poker and billiards (no faro? tsk tsk), pharmacies and stables and everything else that loosely fits into somebody’s none-too-accurate vision of an Old West saloon making for an improbably satisfying visual, even with half-completed floors standing bare to the elements. For the briefest moment, it might even be possible to forgive the fact that certain structures, like the brothel or whiskey still, are somehow unique and can only be built once per game. You know, since most real saloons were whiskey stills and brothels. Still, it’s grand to look at.

And yet, Saloon Tycoon is a complete letdown. A lot of the reason for this comes down to the sad fact that practically nothing you do in the game lives up to the promise of its title. Naturally, it’s possible that somebody’s idea of managing a saloon means little more than building the thing. Saloon Architect, more like. Every floor in your saloon gives you an extra nugget of gold each round — brothels and schoolrooms pay identical rents in Saloon Tycoon’s chipper Old West — and you’ll use these handfuls of sparkle-dust to open new lots, build a floor’s walls, and purchase new floors of various types.

Right away, this straightforward approach proves duller than a decade-old paring knife. For one thing, while rooms are subtly different, each providing a different bonus when completed, once they’ve been built and had their walls put upright, there’s no real difference between a kitchen and a luxury suite. Both provide a nugget a turn, both let you build upwards until you hit the roof, and neither does anything but sit on their foundations, inert and lifeless.

Lifeless is the key word here. As pretty as its saloons appear on the table, there’s hardly any import to them other than indicating how many nuggets you’re pulling in. A whiskey still will never brew swill nor distill spirits, the brothel will never attract less-savory types, the guest room stands as unoccupied as the day it was furnished, the printing press will never publish damning leaflets about the moral perils of visiting your competition’s pharmacy. There are no shootouts to avoid, no outlaws with their generous tips, no rowdy cowboys to hire, no prospectors to rip off. In short, there’s no management in a game that purports to be about managing something.

Seems like a lot of options! Then again, they rarely feel distinct in practice.

Okay, so Saloon Tycoon missed a few enormous opportunities. That much is obvious. But what about the game that actually fit into the box?

Again, the problem is that there’s hardly any reason to prefer one thing over the other. Take the character cards as an example, awarded by building unique floors in your saloon. Get the jail set up and Sheriff Reeves will hang his hat at your bar. Purty Nellie loves a man who loves the theater. Senator Parker has improbably decided to slum it at your brothel. And so forth.

Sounds neat, right? The idea of having a senator or sheriff in your pocket ought to be an exciting one, and should impart in-game ramifications. And yet nothing could be further from the truth. Rather than providing worthwhile bonuses or bending the rules of the game in some way, each of these characters are identical. They provide a few points and something to look at, but otherwise merely plop onto your side of the table like a buffalo chip, and about as interesting. Sure, there are claim cards, which act as objectives both secret and open, some of which require particular characters in order to earn extra points. But in addition to being deeply unbalanced, these are approximately as exciting as a glass of water. Setting up Doc Sanders and Moonshine Angie as drinking partners ought to be worth something more dynamic than six points.

The four outlaw cards prove a little more interesting. Unlike their more genteel pardners, these ruffians actually damage your plans in some way, whether by decreasing your income or increasing your construction costs or some other act of do-baddery. Sadly, they act as a terrible catch-up mechanic, inflicting themselves on whomever meets a particular milestone first, then bouncing around the table as players bribe them. This isn’t so bad in practice, though paying a fistful of gold nuggets and losing your turn just to persuade Phineus Pillbottom to bother somebody else for a while is more aggravating than anything. Even worse is the deck of tycoon cards that ostensibly simulates the underhanded chicanery of running a saloon, but in actuality acts as a stack of no-cost take-thats. It’s possible, for example, to give yourself extra actions, shift around outlaws, or swipe gold from your opponents, without any of these monkeyshines feeling earned in the slightest. When somebody effortlessly piles their outlaws into your saloon with a pair of tycoon cards, it’s hard to avoid the feeling that Saloon Tycoon isn’t playing with a full deck. 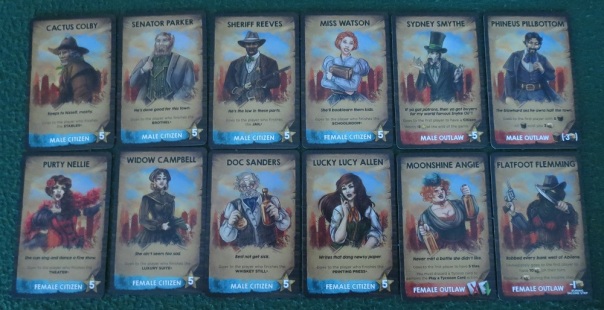 So many memorable characters! Most of whom are identical.

It’s possible that I’m being too hard on Saloon Tycoon. It’s obvious that it isn’t meant to evoke a historical saloon, or provide an in-depth management simulation. If anything, it’s a suitable game for youngsters, though then again it includes a brothel and not every parent is looking forward to that particular conversation. At the very least, they left out the opium dens and didn’t have the laundry run by a long-mustached Chinese man.

Mostly, however, Saloon Tycoon feels like a stack of missed opportunities. This was a smart idea. Too bad the execution feels like an excuse to make a few short piles of cardboard.

Posted on August 20, 2016, in Board Game and tagged Board Games, Saloon Tycoon, The Fruits of Kickstarter, Van Ryder Games. Bookmark the permalink. 3 Comments.