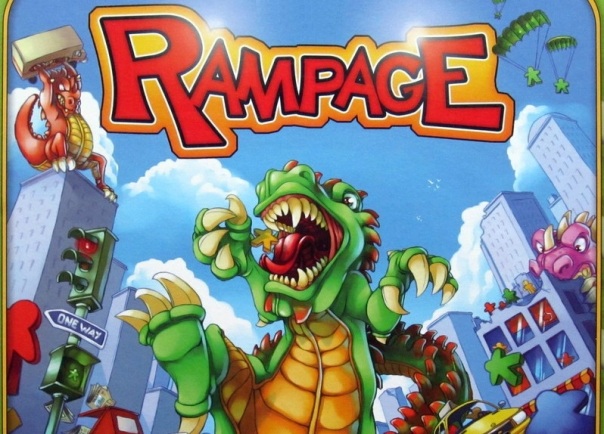 That Pacific Rim was pretty much my favorite movie of 2013 says more (I hope) about the slowness of that cinema year than about my taste in film. On the other hand, it also predisposes me to love Rampage, a dexterity game that puts you in the shoes of a five-story kaiju bent on knocking the stuffing out of a pristine ocean-view city for no other reason than because ocean-view cities are always so dang smug about their ocean views.

Oh, and it’s one of the best dexterity games I’ve ever played.

Ah, pristine Bayside City, home of the Boarcats and the world-famous — AH SHIT WHAT’S THAT?

One of the beautiful things about Rampage is that there isn’t all that much to say about it. The pictures do all the speaking, conveying much of its hefty tactility, the absolute destructive joy that comes from leveling entire city blocks, and even the game’s lighthearted strain of humor. They very nearly review the game on their own, and if their colorful plumage doesn’t excite something deep within your guts, you’ve probably smothered your inner child.

Even so, I’m not getting paid , so I might as well do my hobby and try to elucidate on the claim I made above.

So you’ve got this city, see, built of surprisingly sturdy buildings (considering what you’ll be doing to them) filled with little colored meeples. Your goal, as all monsters worth their salt have sought throughout time, space, and lore, is to eat as many of those little colored meeples as possible. To this end, the city is like a pack of stale Reese’s to a fake-peanut-butter addict, and it’s up to you to tear through that outer crust to get to the gummy goodness within.

To this end, you need to navigate your lumbering monster around the city, which is where the dexterity angle comes in. Each monster is perched atop a disc — its “paws” — so to move about, you pick up your monster figure and flick the disc, sending your kaiju waddling or tearing through the city; then, your move completed, you set the monster back atop his paws and hope you didn’t just wander into danger or rebound off a building in your excitement to get up close to the chewy meeples hiding inside.

Once you’ve reached a building, your options expand. You can tear at the building by picking up your monster and dropping him on it. This is where the sturdiness of the tiles that make up the buildings becomes so crucial, because despite your best efforts, it will often take two or three swipes to really tear through the smaller buildings, spilling meeples out to where you can chow down on them, or sometimes off the board entirely (more on that in a moment).

Alternatively, you could rest your chin on the monster’s head and try to blow the building down. This is a tactic you’ll probably try once before swearing off your sedentary lifestyle as you wheeze and gasp and push a single meeple off the board.

Or you could pick up a car and fling it by flicking it off your monster’s head, which is fabulous when it connects with another kaiju and sends it sprawling onto its kaij-ass.

There are two awesome details that make Rampage come alive, the first of which is that the players aren’t just racing to gobble up the most citizens and buildings. You’re also trying to cause tempers to flare by knocking out each other’s teeth. This is important, since after you’ve taken your turn’s two actions, you gobble up as many helpless meeples in your neighborhood as you have teeth. So at first you can chow down on six little dudes at a time, but after enough enemy monsters blow you over with radiation breath or fling a school bus into your face, you’ll be gumming down maybe two or three. Suddenly your diet isn’t looking so balanced. Maybe it’s time to slide-kick another monster off the table to get even?

The second detail is that when meeples are knocked off the board, they run to get help, possibly calling in news helicopters or air strikes or other hindrances that send your monster clomping off to a depleted neighborhood or getting a bunch of their teeth shot out at once. Suddenly your wanton destruction can’t be quite so careless. But only by the barest fraction. 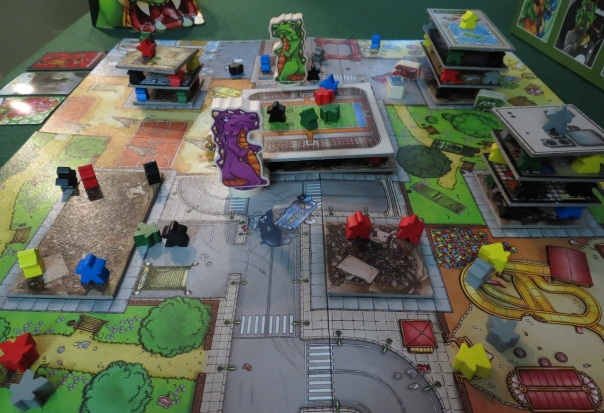 The biggest surprise of all is that Rampage isn’t just great at tickling long-dormant funny-bones, it’s also a pretty darn good game. For instance, eating the most meeples isn’t the best route to victory — a true kaiju seeks a balanced diet, and only by eating complete sets of journalists, army men, heroes, blondes, the elderly, and businessmen do you get all the nutrients you need for healthy glowing scales and claws that grow in without onychorrhexis, not to mention 20/20 night-vision and regular stools.

Also, every monster gets their own unique means of gathering points, and a monster power, and even a one-shot super-monster power that lets you do crazy stuff like pick up an opposing monster and hurl them through two buildings and off the map entirely, or planting a tongue-curling passionate kiss on another kaiju and pulling a couple meeples out of its stomach for your own nourishment. Awesome.

Space-Biff! is kind of like one of those public television broadcasts — we’ve got loads of programming for kids, we’re one of the only stations that imports BBC mystery serials, and we don’t profit from our work. So if you’d like to help out, and you’re simultaneously interested in Rampage, then please consider supporting your friendly local Space-Biff! by purchasing it through Amazon using this magical capitalism link!

Posted on January 14, 2014, in Board Game and tagged Asmodee, Board Games, Rampage, Repos Production. Bookmark the permalink. 9 Comments.