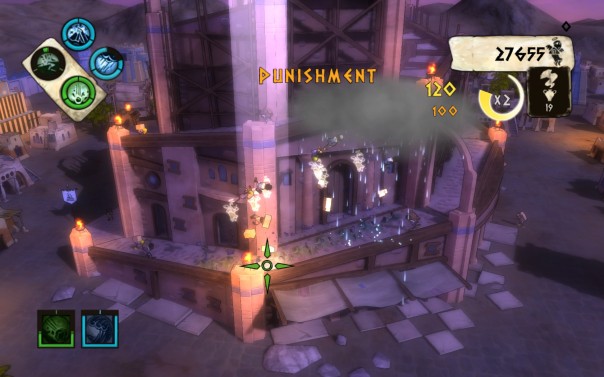 Marketing people! Listen closely, because I’m going to tell you the secret of how to make me powerless against your advertising schemes! Here’s what you do: take your game—any game, really—and slap a glossy religious theme on top of your broken mechanics, tedious gameplay, and repetitive design, and I will lap it up in hopes that you’ve just created one of the few videogames ever to present an interesting take on religion.

On an unrelated note, Ubisoft and Mondo Production recently released Babel Rising on PC. What did I think of it? Find out, after the jump. 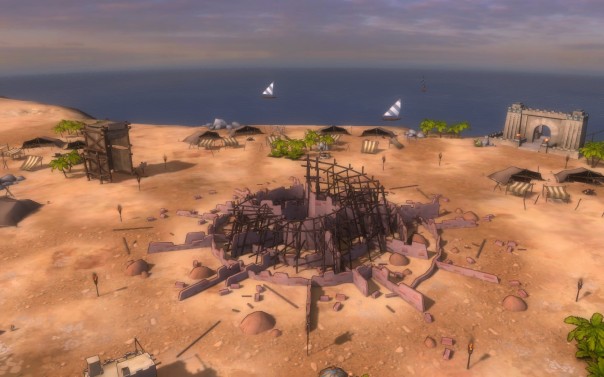 How to Build a Tower to Heaven, Step #1: Don’t build it on sand.

I don’t even know if there’s anything else to say. It’s a mess. It’s boring. It lacks any inspiration whatsoever.

First of all, I need to say that my expectations were low. All that stuff I said above about hoping that any game with a religious veneer might be some sort of theological masterpiece? That was a joke. When I saw Babel Rising on Steam, I did not immediately think, “Maybe they’ll evaluate the morality behind the Babel tale!” I did not hurry off to search Google for the developers’ divinity degrees. I did not expect any profound thoughts on the nine verses of Genesis that make up the Babel story.

What I did expect was a semi-crappy game that might be okay to play occasionally out of boredom. To kill time. To wait for the spouse to come home, or in between reading paragraphs out of your school science book. Something passable.

It doesn’t even accomplish that. 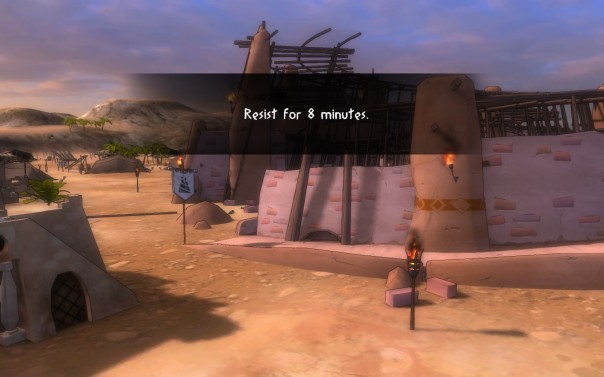 The goal of mission 84. Or 4, though it felt like I’d been playing for 84 levels by that point.

Here’s the entirety of the game: You’re God and you want to prevent some dusty workers from finishing their tower to heaven. When a mission begins, you have the foundations of a tower and a goal. The goal is usually something uninspired, like “Kill 450 Workers,” or “Let 25 Cursed Pots Survive” (which seems inadvisable. I always shatter cursed pots on sight, especially when I’m a deity). Then you pick two sets of powers out of four possible sets. Each set corresponds with one of the four elements, and comes with three powers: a weak one, a bigger one that affects your enemies in a line or radius, and a big all-powerful one that charges up the more you use that set. So, for example, if you pick earth, you gain the power to drop little rocks onto workers’ heads, make an earthquake-rift that kills everyone in a line that you draw with your mouse and then immediately recedes back into the ground, and eventually create a rolling boulder that can squash a whole conga line of workers.

Then you proceed to crush, burn, electrocute, freeze, and bore a whole mess of identical and tenacious builders. Occasionally a priest will show up with an immunity to one of your power sets, so you’ll have to blast him with something else. 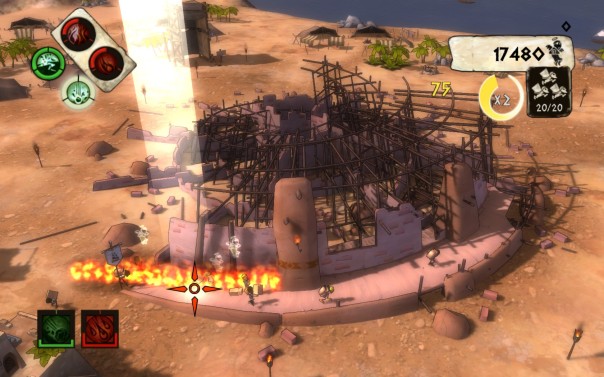 Using your fire powers on some builders.

The game’s stats screen says that ships eventually show up, but I’ll never see those because I didn’t make it that far and I never plan on going back. I played for fifty minutes. In that amount of time, I saw two different attempted towers (the second one had two ramps!) and only the aforementioned workers, priests, and Cursed Jar-carriers, and a whole lot of tears, because my eyes were filled with them from crying of boredom.

It’s a shame too, because the setup here would be perfect for a fresher sort of tower defense game, in which you have plenty of direct powers, but also traps that would affect the walkways below or above. You could create an interlocking defense and watch the silly little workers get mulched. As it is, they’re getting mulched, but it’s no fun to watch because you’re always doing the exact same thing. And hoping that you’ll need the bathroom soon to relieve the monotony. 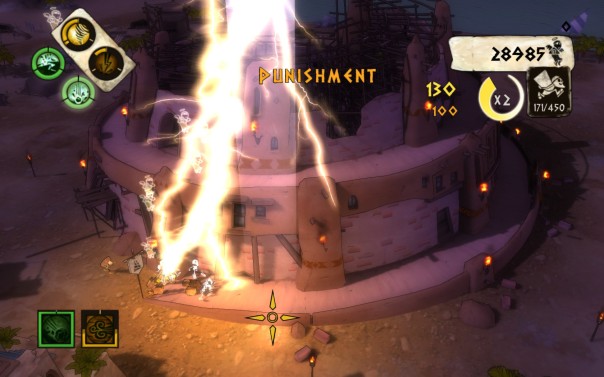 Final score: You may have noticed that all of my pictures are of me killing a bunch of workers at the beginning of the ramp to the tower. That’s because that’s all you’ll be doing for 90% of this game. Don’t support this wreck. This game is a direct punishment from God for enjoying violence in videogames.