I love the gentle irony of Unmatched becoming the flagship property of Restoration Games. You know, the company dedicated to remaking older titles. Yes, yes, I’m aware that Unmatched is a quasi-remake of Star Wars: Epic Duels, but come on — that “quasi” is doing some world championship lifting.

Lest you assume I’m being sarcastic, I can assure you that my affection is genuine. The initiatory set, Unmatched: Battle of Legends, was one of the best games of 2019. My only complaint was that it was a mite too basic. With so many titles passing through every month, I wanted to see Daviau & Co. put their best foot forward. Show us the weird stuff! Go crazy with your characters! There’s no guarantee of any property surviving even a few weeks, let alone long enough to justify additional releases.

Well, I’m happy to eat my fedora, because Unmatched is still kicking. Better yet, Cobble & Fog is easily the most confident set in the series thus far.

Which weirdo will win?

For any tier-one acolytes in the audience, let’s touch on the fundamentals.

Unmatched is about a duel. Two characters step into the ring, dance circles around each other, manage a hand of cards, and eventually come to blows. Some characters have sidekicks. Others have only a single pal, or none at all. Everyone is alike in that they’ve been crafted from the ground up with special abilities, cards, and peccadilloes. Which is to say, not very alike at all.

The principal joy of Unmatched is found in its simplicity. A turn sees you taking two actions. There are only three actions to select from. The map is easy to parse, divided into distinct spaces connected by thick lines, with those spaces further fitting into color-coded zones. Instead of burdening characters with varying ranges, there are only two: melee, for attacking somebody in the bubble next to you, and ranged, which means you can shoot into any bubble in your zone. That’s the essence of simple. It’s also the essence of tactical expression. Depending on circumstance, any given space might be vulnerable or secure, a bottleneck or a blockaded escape route, a vantage point or a death trap.

Easy, in other words, but not so easy that it feels childish. Deep, but not so deep that you can’t wrap up a match in twenty minutes. Not many games land in that sweet spot between “takes five minutes to teach” and “offers difficult decisions.” Unmatched does.

Following up on Battle of Legends’ trend of using characters from the public domain, Cobble & Fog returns with four literary figures who each deserve a spot in Unmatched’s growing pantheon. This is very much their game. In fact, despite the ruleset they all share, each feels like a different game in their own right, ever so slightly like Prospero Hall’s Villainous, but without the self-contained puzzles and plus more direct violence. They’re distinct in a way that the original set’s four characters weren’t. And to be clear, that’s more of a statement on how fantastically realized these four characters come across rather than a ding on the original cast.

Consider Sherlock Holmes. One of Unmatched’s three actions has always revolved around the scheme card, the one with the lightning bolt. Rather than maneuvering or attacking, a scheme represents an immediate effect, often a payoff for positioning yourself in a particular way. In Holmes’ case, these behave like deductive steps. Eliminate the Impossible lets you peek at an opponent’s hand and discard something; powerful, but not game-breaking. Yet this is an important tool in the detective’s arsenal because it enables cards like Confirm Suspicion. Armed with the knowledge of what you’ve peeking in your rival’s hand, you now name a value; if they have a card matching that value, they discard it and take some damage.

But that’s not all. Holmes isn’t much of a fighter, instead relying on little tricks to gain an edge. Elementary further draws upon your knowledge of an opponent’s hand, letting you guess the value of an attack card. If you’re right, you functionally negate the attack entirely. And for those moments when you’re tired of ducking and weaving, Dr. Watson carries a service revolver that lets you take powerful potshots at your enemies. As in the literature, the Holmes of Unmatched may be a being of logic, but he keeps the good doctor on hand for a reason. 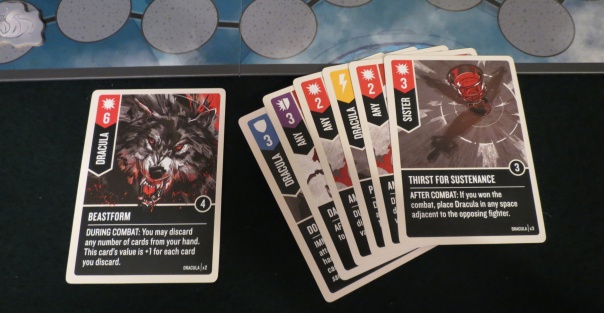 The possibilities are as intriguing as ever.

This attention to detail — or more, this genuine affection for source material — extends to Cobble & Fog’s other three characters as well. At times, the designers exhibit remarkable restraint, as with the Invisible Man’s fog tokens. These begin on the board at the start of the match and can shift according to card effects. What’s more, he can functionally teleport between them. Between that and his tendency to launch surprise attacks, the Invisible Man is slipperier than oil. You’ll chase him down, take a punch in the nose, and watch him dissolve into thin air. Victory means managing his fog tokens by blocking them with minions or corralling them into proximity. This is far easier to manage than any number of rules-heavy alternatives would have been — say, using face-down tokens to denote his location — while still getting across the feel of boxing with someone who’s seemingly everywhere and nowhere at once.

The game’s toughest character to handle is Jekyll & Hyde. At the start of every turn, you decide which of two forms you intend to inhabit that turn. This concept ran the risk of mirroring Alice from Battle of Legends, who swapped between sizes as the match progressed. Instead, the doctor and the brute are treated as separate characters within the same body, with their own cards and abilities. Dr. Jekyll is about self-care (healing) and resisting the temptation to spend too much time as Hyde; suitable, since Hyde is a powerhouse who also self-harms every time he moves around the map. Just as Robert Louis Stevenson’s character waged a tug-of-war for his soul, you’re doing the same in a constant exchange of health and raw brutality. More than beautiful illustrations and a cool mini that changes appearance depending on which angle you view it from, Unmatched gamifies the novel’s thematic underpinnings.

Same goes for Dracula, who, it should be said, happens to be my personal favorite. At first glance the count might seem oddly plinky, dealing minor injuries as he lures foes into traps with his mesmerized minions. Nor is his health much to write home about — sorry, that’s a necessary tidbit of epistolary humor. The point is, these weaknesses seem initially glaring, but that’s when Cobble & Fog’s authorial priorities slides into focus. This isn’t the up-boosted Dracula of video games or CGI-infested Hollywoodisms. Neither is this a demigod downscaled with a hit point penalty to make a pairing against Sherlock Holmes seem fair. Rather, this is the Dracula who plays with his food. When properly motivated, he can bring fearsome rage to bear. But for the most part, he’s content to stalk his prey, raise undead hotties to make his enemies uncomfortably horny, and snack on the occasional sip of lifeblood.

I had little doubt that Cobble & Fog would follow in its predecessors’ footsteps by providing imaginative, clever, and mechanically inventive tactical duels. What I didn’t expect was that it would be so faithful to its source material. By seeking to capture not only the aesthetic of these characters, not only their catchphrases and likenesses, but also their behaviors, their central struggles, even their thematic import, everything about the game is gifted a breezy intuition. Whether deducing the contents of a rival’s hand, disappearing into the fog, struggling with your lesser nature, or treating your opponent with the same attention a feline might pay to a defeated mouse, this is Unmatched at its finest.

Posted on June 17, 2020, in Board Game and tagged Board Games, Restoration Games, Unmatched: Cobble & Fog. Bookmark the permalink. 12 Comments.