The Compromises of This Guilty Land

In October of last year, White House Chief of Staff John Kelly mentioned in an interview on Fox News that “the lack of the ability to compromise led to the Civil War.” Perhaps he was thinking of Henry Clay’s Missouri Compromise of 1820, Compromise Tariff of 1833, and Compromise of 1850. Because, hey, they all had the word compromise in them, and likely postponed the war for years! After all, according to Senator Henry S. Foote, had there been another Great Compromiser like Clay in 1860, the Civil War might have been averted.

Except we’re talking about the same Henry S. Foote who served in the Confederate Congress, which promoted a treasonous war to preserve the enslavement of nearly four million people — a practice that violated human bodies and freedom, abused the rights of citizens and states alike, and turned to violence the instant the tide of public opinion shifted against them. The nation was torn asunder despite decades of compromise. Because that word has dual meanings. Too many compromises and you begin to compromise yourself.

Such is the thesis of Tom Russell’s This Guilty Land, stated without reservation or hesitance: slavery was morally poisonous, any compromise that allowed it to continue was unsustainable, and the American Civil War was inevitable. 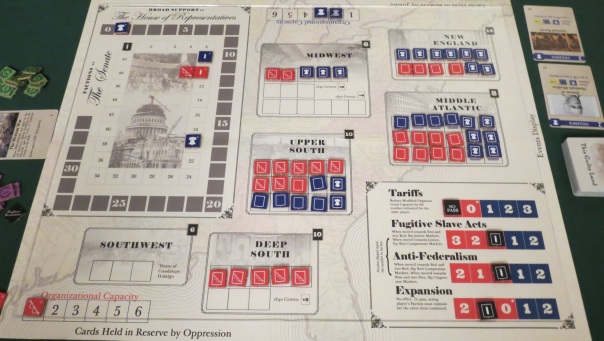 It’s easiest to think of This Guilty Land as a game about political deadlock.

Here’s what I mean. There are two colors vying for control of (initially) five regions of the United States: red for Oppression and blue for Justice. If those titles seems a little too on-the-nose, so was Preston Brooks’ cane across Charles Sumner’s face. But color alone doesn’t mean everything. Unless your faction symbol is visible — either a liberty bell or manacles — then a counter of your color doesn’t strictly belong to you. Instead it represents somebody in the middle. A centrist. A compromiser. Sure, when it comes to voting on a law they’ll lend their say-so to one side or the other, because voting on a law represents a binary yes or no. But they aren’t yet willing to take a firm stand on the issue of slavery. For that, they’ll need a push. Sometimes a shove.

Not always pointless, mind you. But often enough that many actions feel like they’re accomplishing little more than reversing your opponent’s most recent gains. Sway some representatives in the Midwest, your opposition quickly swings them back. They attempt to bully through some legislation, you counter with a well-timed speech. Even political will, the game’s currency, tends to hover at equilibrium, with most actions passing some quantity to your rival. Whether you’re passing a law, massaging public opinion, fighting the Mexican War or holding a census, for every action there’s a — well, not an equal reaction, but a proportionate one. And that’s before we even broach the topic of how to handle watershed moments like revolts or the formation of a political party, which often harm your cause as much as promote it.

But for every instance of deadlock, there are moments when one side will break through and achieve a landmark victory. Which is why even the smallest action requires deft timing, and even the slightest change to the board can have a tremendous rippling effect. It’s the sort of game where you can paint yourself into a corner, or hand a major advantage to your opponent, or blunder from one crisis to another, and that’s it. Nobody’s coming to rescue you. Certainly there’s no inbuilt system that will drag you out of the hole you’ve dug for yourself. The soul of the nation hangs in the balance, after all.

Speaking of souls, the heart of This Guilty Land is found in its cards. For a card-driven game, these are refreshingly restrained. Of course there are special events, such as the Treaty of Guadalupe Hidalgo or the 1850 Census, most of which either add new regions or expand existing ones, along with fresh Representatives or Senate seats to quibble over. Most of the cards, however, fall into a mere four types. And while each type can be employed in two or three different ways, this streamlining of potential options keeps the proceedings on track.

The simplest of these is Public Opinion. More than the others, Public Opinion produces a reliable effect, either hardening your compromisers into full-fledged members of your faction or swaying opposing compromisers from their patch of middle ground to your own. Over time, you’ll ideally stack your reserve with additional Public Opinion cards, increasing their effect and providing new opportunities to block your rival’s efforts. Where early on you’ll only be able to nudge a single counter over to your side, by the end you’ll often be able to swing three or four.

That’s if your faction has the organizational capacity. At the outset, neither side is fully mobilized for the cause. This is where Organization and Violence cards step in. The first seems to present a simple decision: spend some political will to increase your level of organization. Wonderful! Why would you not do that? Well, because an Organization card also carries the possibility of congealing into a political party. This makes Public Opinion look downright piddly, splitting your wavering support straight down the middle. Half of your compromisers are pushed into your faction, while the other half defects for the opposing side. Just like that, you’ve divided the whole country. That’s the new-carriage smell of a freshly minted Republican Party.

While that’s a tough decision, Violence makes a nuisance of itself. Unlike your other cards, there’s no way to easily discard John Brown’s raid on Harpers Ferry or the entirety of Bleeding Kansas. These acts squat in your event display, hogging up space, refusing to budge unless you either capitalize on them — which will shed some of your faction’s hard-fought support — or spend valuable space in your reserve to bury them forever. Neither are ideal, but both might be minimized if your timing is right. 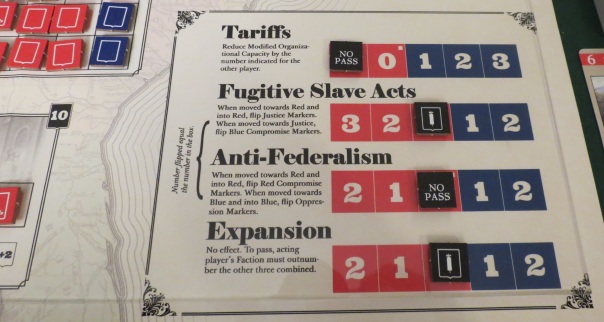 The final card type is the most complicated, but only because it’s interwoven so tightly with the state of the board. All of those regions and support counters exist for a reason, providing standing both in the House of Representatives and the Senate. These function somewhat differently — the House updates immediately whenever a counter switches color and is won by a simple majority, while the Senate is elected at the conclusion of every round and features Justice and Opposition factions operating alongside their compromising counterparts — but both are essential for the passing of Law cards.

There are four issues to debate, each with lasting consequences. Tariffs hamper your opposition’s organizational capacity, while Anti-Federalism and the Fugitive Slave Acts mess with their counters. More importantly, any law standing in your favor provides a steady trickle of victory points. It’s even possible to win by moving three laws completely into your favor, though it’s a remote possibility.

It’s here that This Guilty Land finally grounds itself. Not only do these laws provide a reason for every nudged opinion and flipped counter, they also establish an essential context. Far more than red versus blue, this is a conflict over whether you should be required to report a runaway slave. Whether certain states should be admitted into the Union so that slavery can be expanded. Whether the economy should be adjusted with tariffs to protect the agrarian South or the industrialized North. What this country is and what it is not. The growing pains of a democratic experiment forced to confront the issue that it has ignored and sidestepped and compromised on since its birth.

Sway the centrists, radicalize your base.

That’s the real emphasis here. This Guilty Land is no slouch as a card-driven contest of wills, but it’s more interested in talking about political deadlock, and how compromise can be as pernicious as the policies it necessarily protects, and why there’s no possibility of a negotiated solution to a problem as deeply ingrained as slavery in the United States.

Look no further than the game’s victory conditions for proof. I mentioned above that it’s possible win via legal landslide. It’s also possible to win by ridding the country of your opponent’s faction entirely. In both cases, I’m being flippant when I say that these are “possible.” I’ve never seen them happen.

Instead, This Guilty Land grinds inexorably toward its conclusion. Either the deck burns itself out or the pool of victory points runs dry. Either way, whichever faction currently stands in the lead will harp on every chance to hasten the game, while the other side scrambles for time and advantage. One vote at a time, one manipulated Senate ballot after another, all those cards and counter-cards, This Guilty Land produces a miasma of desperation that doesn’t permeate many games. It evokes two men locked in mortal struggle in shallow water, one on top, one just beneath the surface, switching regularly, both growing fatigued.

Put another way, This Guilty Land takes less than an hour to play, but it’s about fifteen minutes before it begins to overstay its welcome. And for the first time, I mean that as a compliment.

Preston Brooks should have been a baseball star.

There’s a case to be made that This Guilty Land makes one or two compromises of its own. Just as a mistake can sink your efforts, so too can a series of poor draws. The entire system is burdened with a fragility that can be unsettled by lopsided returns from the deck. And while some folks will chafe at the idea of playing as the embodiment of Oppression, others will find it too abstracted to evoke anything at all.

But unlike men, not all compromises are created equal. This Guilty Land does precisely what it sets out to do, launching a perceptive and intelligent, if necessarily brisk, conversation about the complicity of compromise in debate, the balance of power in the decades leading up to the American Civil War, and the dangers of placating bullies. This is Tom Russell’s best work by a mile. Not many games are this draining, or this opinionated, or this essential.

Posted on December 18, 2018, in Board Game and tagged Board Games, Hollandspiele, This Guilty Land, Tom Russell. Bookmark the permalink. 9 Comments.