The Unbearable Smartness of Pericles

Not to be too hysterical about it, but the Peloponnesian Wars were sort of a big deal. By the time the clash between Athens and Sparta grew to encompass Sicily and much of the middle and eastern Mediterranean, and certainly once they drew in the Persian Empire, they practically qualified as an antique World War. The outcome would cut short the golden age of Greece and pave the way for those perky Macedonians to solidify into the force that would Hellenize much of the known world.

It was Very Serious Business, is what I’m saying, brimming with intrigue, oration, and big stonkin’ battles on both land and sea. And in order to capture the freewheeling nature of the conflict, Mark Herman’s sandbox wargame Pericles just might be one of the maddest — and most maddening — things I’ve ever Greek-wrestled with.

Picture this. Athens is on the cusp of empire. They’ve got unfettered access to the Aegean Sea, a professional navy, and a bunch of pals called the Delian League. Mobility and expansion are their game to lose, and perhaps the only problem is that they’re tethered to their home base in Attica and have a serious food shortage. Fortunately, their aforementioned mobility and sea power will hopefully secure them enough grain abroad to keep everything running.

Just a short distance away even by ancient standards sits Sparta. Renowned for their prowess in combat, they’ve got aspirations of their own, and have formed their own network of allegiances and upstarts simmering with resentment for the too-cool Athenians. They’re tough, almost unbeatable in straight combat, but largely trapped in place by Athens’ superior navy and the physical geography of the Peloponnese.

Which is to say, the situation is deeply asymmetrical. It’s mobility versus mettle, reach versus a strong central force. And what you do with it is entirely up to you.

It would be easy to explain Pericles in terms of its goals, except Pericles has a tendency of not playing out the way you were hoping. Athens can win if they secure foreign granaries and beat up Sparta enough to shame them among the other city-states of Greece, and Sparta is going to look pretty dang fine if they subjugate the golden city of Athens itself or cut them off from a source of food entirely. Instead, it’s almost guaranteed that victory will be won by a hundred small triumphs — a base here, a nettling military victory there — until at last your dominance is assured and all those neutral cities flock to your side. 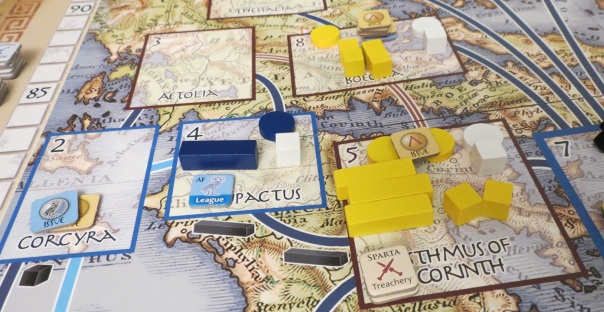 Resolving the issues of the day. Violently.

War in Pericles is deeply complex for a few reasons, two foremost among them. The first is the way the game handles your military orders. Rather than simply passing between Sparta and Athens, with armies and navies marching and sailing and mustering back and forth, each war phase begins with orders being placed out among the various theaters of the Aegean. Tokens are played face-down, and, in a huge twist that alters everything it touches, may be stacked one atop the other, similar to the way they were piled in Starcraft or Forbidden Stars. When it comes time to resolve those stacks, players alternate between themselves to pick up one of their orders and resolve it.

Right away, this presses each placed token between the Scylla of your opponent’s orders and the Charybdis of correctly measuring your own. It’s possible, for instance, to invade a contested theater, sweep away your opponent in glorious battle, undertake diplomacy to persuade the local city-states to join your league, then naturalize them into joining your side entirely. Note that I said it was possible, not likely. Doing so would require not only placing a whole stack of orders in the right sequence, but also avoiding any disruptions thrown down by your enemy. In a system where the best-laid plans can be terminally delayed by the careful placement of an otherwise-worthless rumor token, it’s best to hope for success but plan for setbacks, failures, and frustrations.

The other thing muddying the Aegean waters is that the orders themselves are carefully suited to Pericles’ status as a sandbox game, though that also means there are some hurdles to vault before they become second nature. Diplomatic, League, and Military orders each boast multiple uses. Diplomacy alone can be used to sway opposing city-states to your cause or riddle them with damaging treachery markers, court a neutral city, or purge opposing treachery from your midst. None of these are all that difficult on their own, but when you consider that the game’s five orders multiply into over a dozen possible moves, it’s easy to become overwhelmed.

The forum, where much of the game’s action takes place.

Now that I’ve done Pericles a disservice by pitching it as a terrifically complicated take on ancient war, it’s only going to get worse because I’ve left out the most infuriating part — though it just so happens to also be the most interesting part.

By focusing on only the war between Sparta and Athens, Pericles might sound like a two-player outing. But it isn’t. Rather, it’s a four-player game and mechanical sequel to Mark Herman’s own Churchill.

For those who aren’t in the know, Churchill tossed you into the uncomfortable alliance between Churchill, Stalin, and Roosevelt. It looked like a wargame in many respects, complete with tank blocks and grand theater maps of Europe and the Pacific, and looked like a cooperative wargame to boot. But while it was true that the Big Three were working together to topple Germany and Japan, Churchill was actually a bitterly competitive affair, complete with temporary factional alliances, ongoing grudges, and real-world above-the-table bickering. In fact, World War 2 quickly faded into a sort of necessary background noise to the conference room intrigue of one-upping your own allies to shape the world once the bullets stopped flying. It was remarkable.

Pericles takes that concept and draws it outward. Where Churchill’s war sometimes came across as perfunctory — you had to be deeply unlucky or deeply stupid to not eventually roll into Berlin and Tokyo — Pericles divides its four players onto teams, then further splits them into feuding political factions. Two of you will helm the Aristocrats and Demagogues of Athens, while the others don the crimson robes and ripped abdominal muscles of the Eurypontid and Agiad kings of Sparta. Before the curtains even rise on the war phase, your order tokens must be earned through argumentation and played cards, an ongoing tug-of-war to determine which political faction will shine in victory while the other sulks in the shadows. And if that wasn’t difficult enough, there are plenty of ancillary issues to debate. Perhaps you’ll want to ostracize an opposing leader to win over your citizenry, or host the games to look sexy while boosting recruitment, or collaborate with your enemy to force a temporary peace and shame your political rival as a warmonger.

It’s hard to overstate how completely this permeates the design of Pericles. Far from feeling bifurcated into two distinct halves, every single order won during the assembly translates into opportunities in wartime, where they not only represent a push against your enemy city-state but also a gain in honor for your faction. You’re fighting both on the battlegrounds and at home, and neither conflict is any less bitter for the presence of the other.

This is brilliant stuff, though it also bears the unfortunate side-effect of making Pericles quite overwhelming to learn. Both the war effort and home intrigues are rife with their own subtleties, and often echo back on one another. It’s a breathtaking design in many ways, and witnessing it in action grazes the complexities of the conflict it seeks to simulate.

But hoplite, it is hard.

Room to grow, for now.

The thing is, nearly all of Pericles’ obtuseness is intentional. Its infuriating war-making captures the density of its subject matter, revealing how even the tiniest of disruptions might bring an entire military expedition to its knees. And by dabbling in politics it illuminates the fact that all those soldiers and ships and envoys and schemes and manipulated auguries came from somewhere, and almost certainly came at someone’s expense. The only thing as treacherous as the churning waters beneath a trireme’s oars were the halls where men debated where to send them for their own gain.

Pericles is not necessarily any fun, at least not until you’ve put in the work. Even then it can be frustrating, reveling in the possibility of political gridlock, wasted orders, and horrific setbacks. It’s likely to infuriate you at every turn.

It’s also ambitious, devious, and unbearably smart. Pulling off a sequence of orders that cripples the enemy city-state is a fine thing; doing so when it shames your ally and makes you look like a hero of the people is a work of art. The result is one of the most frustrating and rewarding sandbox wargames ever crafted.

Posted on September 2, 2017, in Board Game and tagged Board Games, GMT Games, Mark Herman, Pericles. Bookmark the permalink. 18 Comments.