I think maybe the reason the Android universe of Netrunner and Infiltration functions so well as a setting is because it’s pretty much just a dim mirror of ourselves. Strip away the last few filaments of privacy, make corporations even more faceless, empower hackers to be even weirder and more frightening, and there you have it: the future. The space elevators and robots hardly even register.

Then again, my day-to-day doesn’t include negotiating with people who might want to foster deadly diseases in the beachside district in order to up their bottom line with their shareholders. More’s the pity. Hopefully we catch up to the future sooner rather than later.

To say that you’re doing some Very Bad Things in New Angeles, home of the space-elevator Beanstalk, would be a bit inaccurate. While it’s true that Very Bad Things happen, and happen with numbing regularity, and often happen because you permitted and/or caused them, that’s not really what you’re about. As the guiding hand of one of six mega-corporations, your goal isn’t to cause suffering. It’s to increase your market share. And if that should include letting the largest and most important city on Earth slip into chaos, so be it.

Really, your goal is pretty simple. At the outset, you’re secretly assigned a rival. Maybe Jinkteki is sick of Haas-Bioroid lording their inventions over them, or maybe NBN is hoping to break into Melange Mining’s helium-3 monopoly. It’s as simple as just business: have more capital than your rival at the end of the game and you’ve won. And sure, there can be multiple winners, though you can bet there’ll be at least one loser.

Okay, so that isn’t too bad. It’s easy, actually. But the real trick is that you can’t just go about the business of screwing everybody left and right and hollering “Coffee’s for closers!” every time a deal goes your way. See, in a trick pulled straight out of Archipelago, while everyone is pursuing their own ends, your fellow corporations have also been bound together by their stewardship of the city of New Angeles. They live here, work here, exploit the Beanstalk here. Without the city in working order, the Feds might just swoop in and take the place off your hands. In practical terms, this is measured by “threat.” Send the city’s private security forces into a disease-ridden district, and up it goes. You let wannabe mafiosos worm their way into the Beanstalk? Threat. Failed to meet the city’s demands for lights that turn on and clear water that doesn’t contain too many trace metals? Threat. It ticks up by slivers at first, no big deal. But if all that accumulated threat ever bubbles over, it’s failure for everybody.

Only, that’s not necessarily the case. While everybody else is working to keep New Angeles in barely-running order, one of the corps might be working for the Feds. In their case, pushing Human First activists over the brink from demonstrations to outright vandalism or terrorism is a good thing. Disease, district outages, a locally-hosted World Cup that didn’t provide enough branded beanies — for you, all that stuff is good news. As long as you don’t tip your hand and get nowhere in all those inter-corporation negotiations, that is. 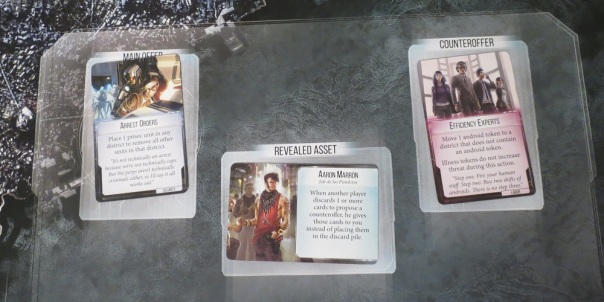 This is what you’ll be staring at for 90% of the game.

But I’ve saved the core of this rotten apple for last. See, you might be after someone who you’re certain is the Fed. They’ve been neglecting the unruly populace, arguing that these are problems that can wait for later. Maybe they even used one of their assets to override your bid to settle down the striking workers of Laguna Velasco. That’s what we in the business call suspicious behavior. Hey, we don’t have a buzzword for everything.

Except it’s entirely possible that they aren’t the Fed. Instead, maybe they’re just working a short-term investment that will pay out tons of capital for every district that’s in protest or strike. Meanwhile, maybe the other guy at the table who’s been a bit shifty about curing disease is hoping to sell the sick populace their shiny new medical plans, and the guy who seems to be cozy with organized crime is trying to launder a quick buck, then he’ll be right back to wiping them out. In fact, it’s possible that the only person at the table pulling an honest salary this round is you, all because you were boring and invested in energy futures rather than short-selling the entertainment industry.

The benefit of all these interlocking loyalties is a peculiar form of paranoia. The people working against you right now might not be the people who are actually out to get you, while the person buttering you up might have you locked in their sights. A huge part of the game revolves around assessing whether a person’s errant behavior can be chalked up to their real identity or merely their short-term investments. Likewise, concealing your identity as a Fed is about constantly massaging the situation. Fitting in, but not so well that you aren’t even bothering with earning capital.

This is all very similar to Battlestar Galactica in that respect, and in other respects too. I haven’t yet written a single thing about the actual mechanical process of playing the game, in part because it’s so dang straightforward that it’s sort of boring to describe. Essentially, the turn-holder proposes an offer — say, cleaning up the streets of rabble or disease — and then everybody else gets to propose their own idea of what’s best that turn, from manipulating public opinion to earning wads of cash. Most of the important concepts are relegated to the cards themselves, from the offers that manipulate the city to the assets who bend the rules, so there’s surprisingly little overhead to the whole thing. Slap down some offers, coax people into supporting your side of things, maybe trade around some capital or assets to change someone’s mind, and there you go.

If anything, it feels like a natural evolution of the formula established by Battlestar Galactica, with many of the finicky bits trimmed away and the negotiated aspects made more personal than ever. That can cut both ways, of course, and as the game stretches on it’s possible to become emotionally exhausted, especially if a shrewd player seems to get their way at your expense time and time again.

All in all, however, New Angeles offers a compelling few hours of tense negotiation, complex interlocking agendas, and the possibility that the whole thing will burn down around your ears. It’s at its best when it’s presenting clear information — the rioters, criminals, police, illnesses, assets, and everything else that makes New Angeles such a volatile place — only to obfuscate everybody’s contrasting valuations of that information until all that’s left is paranoia that every single person in that boardroom is out to get you. The future can’t get here soon enough.

Posted on December 7, 2016, in Board Game and tagged Board Games, Fantasy Flight Games, New Angeles. Bookmark the permalink. 4 Comments.