Much like Space Alert, XCOM, Space Cadets (whether the original or the head-to-head Dice Duel), or the deck-assembling portion of Millennium Blades, Meteor is a real-time game, meaning you’ve got a limited span of time to complete whatever objective has been set before you. With only a scant handful of minutes on the clock, tasks like navigating around an asteroid field, counting off how many turns until that stealth fighter drifts into range of your cannons, cobbling together a tournament deck, or calculating the odds of a squad of soldiers beating back an alien invasion — all simple assignments on their own, given enough time to actually evaluate your options — the stress ratchets up to, dare I say it, meteoric heights.

And yet, though I’ve played many real-time games, I’ve never seen anyone react with quite the same level of incredulity as when I start explaining Meteor. 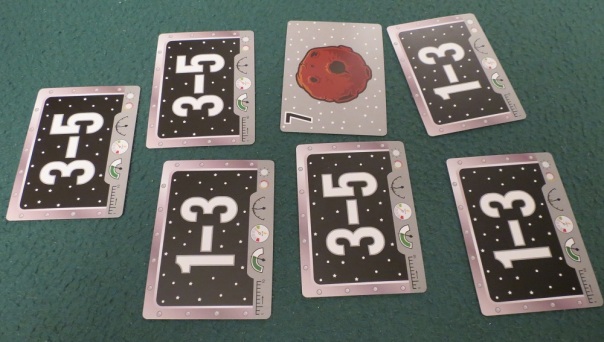 It starts out simple. “This is a real-time game,” I say. They nod wisely. They’ve played real-time games before, mostly the ship-building portion of Galaxy Trucker because it’s Somerset’s favorite. I explain that we’ve got a salvo of meteors burning towards Earth, they’ll be here in five minutes, so we won’t have much time to figure out how to shoot them down.

I go into some depth about our options. We each have a launchpad where we can assemble rockets to blow up the meteors. Or we can assemble technology, stuff like an energy plant that will let us get rid of crummy cards to draw a single energy card out of the discard pile. I remember to explain that there are four types of energy — nuclear, chemical, batteries, and hawk urine. They chuckle. Hawk urine? “I don’t remember what it really is, but it looks like hawk urine,” I say. They’re still smiling.

Then I drop the first bomb. “We can’t talk.” Stunned silence. “We can gesture, grunt, make sex noises when someone does something right, whatever. But no talking. Maybe later we’ll build a communications satellite and then we can talk, but there’s a good chance that won’t happen at all.”

The second bomb hits when I explain how to blow up meteors. I inform my guests that when they finally assemble a rocket, built by pairing a rocket card with the required energy card(s), they announce launch — “Yes, you can talk to say launch, Geoff,” I say — and then slide the rocket across the table to one of the meteors. Now, we don’t know what any particular meteor is, not exactly. We know roughly, but not its precise dimensions. When we hit it with a rocket, we can finally flip it over and see what we’re dealing with.

Here’s where things really get bad. First of all, if our rocket doesn’t match the size of the meteor, it does nothing. No lost hit points, no knocking it off course, nothing. We just threw a week-old helium balloon at a granite courthouse. If our rocket’s blast matches the size but it turns out the meteor is sensitive to chemical bombs? Then we did nothing. In fact, unless we hit it with precisely the right rocket, we’ve still got a rock the size of Texas coming our way. And yes, I know those are technically called asteroids, not meteors. Either way, they’re about to blow us up. We can talk semantics once we’ve saved humanity.

“What if we hit it with a bigger rocket?” someone asks.

Good question, because it’s nothing good. If we blow up a meteor with a too-big rocket, we’ve just caused a high-atmosphere shockwave. Now the rest of the meteors are coming even faster. Great job.

This is usually the point when someone asks if Meteor is supposed to be a fun game.

When you need atomic, you get chemical.

To be clear, I love Meteor. It’s hilarious. It’s been my most-played game of the past month, and not just because it takes only five minutes to play. Though sure, that has something to do with it. Maybe even a lot to do with it. When we lose at Meteor and everybody is laughing about how badly the cards screwed us, or how we sped up too many meteors with shockwaves, or where the hell was that damn resource plant card again, nothing major was ventured and nothing major was lost. We didn’t just waste two hours on what amounted to a big fat failure. We wasted five minutes. You could play Meteor over twenty times in two hours if you were on the spot about getting it set up after every failed attempt.

Beyond Meteor’s brevity, this is a perfect little package, built to appeal to just about anyone. If it’s feeling too hard, add in the cards that give everyone a special ability. Once you’re beating the regular game every so often, maybe add in a boss meteor, the leviathans that do awful crap like splitting into two still-huge rocks or dragging new meteors into play every minute or just being so darn big that you’ll need to hit it with four rockets at once.

In a way, this is real-time gaming at its purest. There’s so little here that opening the box almost feels like a joke, the insert flabby, just a deck of cards and some dippy sand timers. At first read, the rules feel too brief, like there isn’t any there there. Then you get it set up, flip that first timer, and within a minute you’re making a sound not unlike a bumblebee riding a blender. Translation: “I need an atomic energy to launch this warhead, please. Quickly would be nice.”

Really, the best compliment I can pay Meteor is that I have yet to put it on the table only once. Every single person I’ve played it with has given me that dazed look when they realized the enormity of our task. Five minutes later, they were asking for another shot. Even when one hand was entirely unfair while the next saw us building a spy satellite that flipped all the meteors up and made victory easy, even when someone drew nothing but rockets all game, even when Earth was destroyed over and over again, five minutes later, we were hungry for more.

Posted on June 1, 2016, in Board Game and tagged Board Games, Mayday Games, Meteor, The Fruits of Kickstarter. Bookmark the permalink. 5 Comments.