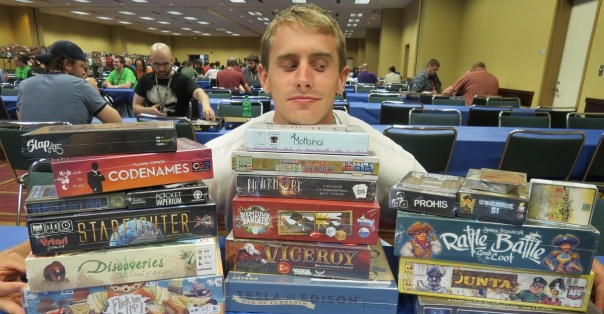 By Saturday, the fathoming gets real easy. 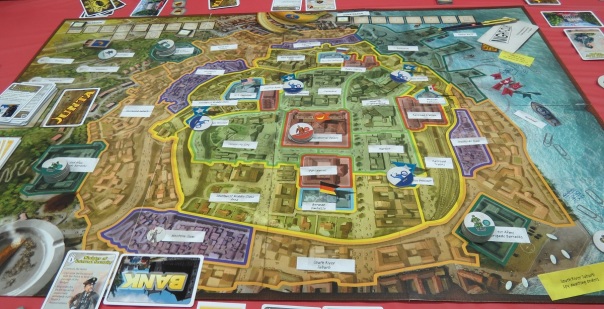 Another day, another coup.

The downside to the crowds thronging about the convention center’s hallways is the heightened chance of barging into the unfortunate few who have yet to realize that our species has evolved an aversion to stopping mid-intersection for a reason. And heaven forbid you need to take a whiz, because two days and nights of convention food have made the bathrooms start to smell like the toilets themselves have come down with stomach flu.

On the other hand, there’s the upside that sitting down for a three-hour game of Junta doesn’t make you feel guilty about missing out on a hundred other opportunities. You can sit and connive and lie, occasionally turning in your seat to gaze wistfully at that one event you were thinking of maybe going to, and there you’ll see about a billion people writhing in a hamburger-like mass. The sigh you’ll release can only be described as contented.

And what a game it is, too! Junta is an older specimen, dating back to a simpler time when I didn’t exist, though it’s now getting a fresh release from AEG. As its title implies, it’s all about controlling a banana republic through intimidation, flattery, and outright force. To sum up our game, I spent the entire duration outraged that my department (the First Army Group) was being underfunded. Of course, we were funded completely adequately — it was my Swiss bank account of embezzled funds that was looking anorexic. Taking part in two major coups, including one that saw me stirring up the nation’s students and arming them to take the palace despite egregious losses, was a natural part of that.

Basically, I can’t wait to try it again. 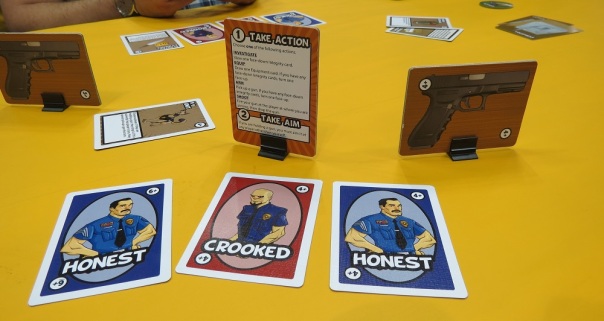 Even good cops have a little bad in them.

With half the day spent shouting about misplaced pesos in a bad Spanish accent, it was a relief to meet up with writer Charlie Theel for a few lighter social deduction games. It would be a nice break from all the Very Serious Business of running a country where everyone wants to assassinate you.

Then we discovered that his group takes social deduction games more seriously than I take my descending bowel cancer.

It’s always tough playing a game like One Night Revolution with an established group. Since half the people at the table know each other, they’re free to hurl accusations and read each other’s facial tics, but as soon as I speak up, everyone at the table gives me a look like I just hocked a bodacious loogie into their backpack.

Even so, both of the games they introduced to us were excellent examples of prime social deduction. One Night Revolution takes the formula of One Night Ultimate Werewolf and perfects it, while Good Cop Bad Cop does a surprisingly amazing job of acting out a ’90s cop movie right before your eyes, complete with double-crosses, bad guys who turn out to be FBI agents, last-minute defibrillator saves, and no coherence whatsoever.

Making potions. Or maybe using potions to make bigger potions. I’m not sure.

With the convention’s third day growing late, we headed over to our final scheduled demo. There was some muttered worry that this would be another beta testing disaster, but we were wrong to doubt, because Andrew Federspiel’s Apotheca is actually a really, really fun game. To draw a comparison (which I sort of hate to do), think Tash-Kalar: Arena of Legends except you don’t have to be a super-genius to have fun with it.

The idea is that you’re trying to satisfy the most apothecaries by making a tic-tac-toe line of three same-colored potions somewhere across the board. Making this a little trickier is the fact that many of the potions start out face-down, plus the absence of any “regular” move. Instead, each apothecary does their own thing, like letting you swap pieces if they’re on opposite ends of the board, or twisting a cluster clockwise, or hopping around like a chess knight. Gems can be used to hire extra apothecaries, but gems require players to flip hidden potions face-up.

It doesn’t look like much at first, but it’s a deceptively smart game. Lots of thought has gone into the design, especially in regards to the clever apothecary abilities.

And that’s it. Apologies to anyone hoping for a part four, but our group of SB! correspondents is heading home first thing in the morning, largely because we’re exhausted and sweaty and would very much like to see our loved ones again.

Posted on August 1, 2015, in Board Game, Convention and tagged Board Games, GenCon, GenCon Loot, Not SaltCon, Space-Biff!. Bookmark the permalink. 2 Comments.