Homeland Is Where the Smart Is

Except me when I tell you to trust no one, obviously.

Welcome to the CIA.

Whether you’ve seen Showtime’s Homeland won’t much affect how well the game gets its hooks into you. In part because the game doesn’t actually mirror the series all that closely, mostly featuring a few characters’ faces on cards and tossing out the occasional Middle Eastern name that might sound familiar to some but will certainly take on a menace of their own within a few rounds. Abu Nazir, whoever you are, I hate you.

Mostly, it works because there’s something natural about being suspicious about everyone — their motives, the way they look at you, the tone of their voice and whether they can’t help but chuckle when they pledge their loyalty or innocence. “You want a soda?” one of my co-players asked me last night, voice eerily casual for halfway into a tense game of Homeland. In response, I couldn’t help but think, Why are you being so nice to me all of the sudden?

The setting, simply put, is a CIA conference room, and its players are analysts tasked with keeping America safe. The centerpiece is a board of reported terrorist activities, and onto this board you’ll pin ongoing threats. For maximum uncertainty and discomfort, these are cleverly assembled from a combination of terrorist organizations and their plots. Sometimes you’ll know that General Danesh Akbari, runner-up at the annual terrorist-of-the-year gala, is up to something, while at other times a bumbling Lone Wolf has been placing threatening phone calls. However, you can’t be sure what — specifically — they’re up to. One might be attempting to bribe a military advisor while the other tries to assassinate the vice president. One of these is significantly easier to prevent than the other, just as the unaided Lone Wolf is easier to stop than General Akbari’s entire network. Learning which terrorists are pursuing which plots tells you how difficult that plot will be to clear.

Stopped them right as they boarded the plane.

And clear those threats you must, because what begins as a trickle soon transforms into a flood, and soon after into a tidal wave. Failing to stay on top of all the emerging dangers is a surefire route to wholesale CIA collapse.

Unless that’s what you want. Cue ominous music. But more on that in a moment.

For anyone who’s played Dead of Winter or Battlestar Galactica, the system for clearing threats will be comfortably familiar, and it’s no surprise that Homeland has already been compared so extensively to those games. Here, once a threat becomes “imminent,” you’ve only got one round left before it’s set into motion. Prior to that point, you’ve got plenty of tools at your disposal for combating or surveilling a threat. Intel cards are the staple resource, added up to neutralize threats—

Or ensure their success. OMINOUS MUSIC.

— and then there are soldiers for peeking at the intel cards already on a threat to determine how well you’re doing at hindering those terrorists’ plans, and undercover agents for getting a look at the plot itself. These will give you information to share with your fellow analysts—

Unless you lie to them. YOU HAVE NO IDEA HOW OMINOUS THIS MUSIC HAS BECOME. 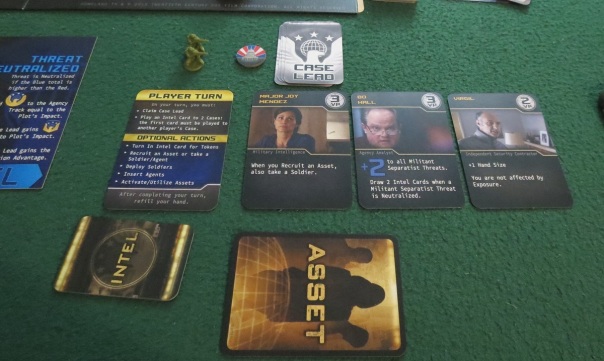 These are the people I’ve compelled to aid my goals.

Here’s the lynchpin of Homeland’s gameplay, the source of all its tension. While it’s already tough to clear that torrent of threats, nothing is quite so nerve-wracking as the knowledge that some of your companions, fellow CIA analysts like yourself, huddled over the same conference table and studying the same promises of violence and destruction, might want them to happen.

It’s terrifying enough to be the lead officer on something big. Say, there are reports that rogue sniper Tom Walker is in the country, and someone’s operatives have revealed that he intends to bomb a government facility. Stopping the plot could be a huge boon for the Agency, though its success would be disastrous. But then — and this is the part that makes the game tick — you have no idea if the guy before you just fed your case good intel or bad. Did they help out with a warrantless wiretap or a defector who knows the suspect? Or did they breach security or activate an opposing sleeper agent?

Keep your ears and eyes open, because figuring out what your companions are up to is absolutely essential.

Chances are that most people are loyal agents. Like yourself, of course. Loyal agents just want America safe and sound, though they wouldn’t begrudge a promotion for good work. Then again, they might be political opportunists, the despicable sorts who’d love another 9/11 because then they can use that fearful environment to further their careers — just so long as it doesn’t mean their death. Or they might be a terrorist mole, bent on rotting the CIA from within and bringing about the end of Western Civilization.

These three roles brew suspicion at every turn. Loyal agents work tirelessly to stop the bad guys; opportunists want the bad guys to win sometimes but not completely; and the terrorist mole wants the world to burn. Even in the event the world remains intact, the mole might weasel past everyone’s suspicions, concluding the game without anyone exposing them to win anyway.

A wealth of intel — ostensibly.

It’s a smart system, full of cool ideas that give it a life of its own. Victory points are often vague until the very last threat has been analyzed, keeping everyone on their toes. Special asset cards can transform your strategy or drop hints about your goals. Drone strikes can remove nasty threats entirely, provided you’ve done some legwork first. Nicely, nearly any position or draw can be capitalized on by clever players, whether by creating a trust-building “dump” for negative cards or by tanking the cases of the player you think is winning. And there are loads of emergent strategies and feints to take advantage of. For example, one recent game had my wife accidentally tip her hand as the terrorist mole. Then, when nearly everyone at the table voted to expose her at the end of the game, we lost points when it was revealed that she wasn’t the mole at all. Meanwhile, she exposed the real mole for points of her own. Good game, honey.

By way of comparison to Battlestar Galactica and Dead of Winter, it’s different enough to stand on its own. It’s considerably quicker than either of those games, a feat performed by trimming out nearly everything other than the threats, their resolution, and the way they force you to consider everyone’s loyalties. By handing out three competing hidden roles, certainty is a rarity because multiple players have cause to act suspiciously, making it a subtle game of betrayal rather than one that turns blatant right at the end. It’s consequently the tightest game of the three, though it doesn’t feature the same level of narrative that drives the others.

Personally, I’m not interested in that comparison. Homeland is sharp, easy to teach, and does a stellar job of getting everyone to regard each other suspiciously for about ninety minutes. Much like the game’s asset cards that let you swipe other, better assets from other players, it’s a keeper.

Posted on March 14, 2015, in Board Game and tagged Board Games, Gale Force Nine, Homeland. Bookmark the permalink. 9 Comments.