← A Valley Without Wind 2: Panic in the Ranks
A Survivor/Killer is Born →

Together for the First Time: Stone & Relic

These old stones may contain relics. No telling, really.

My admiration for Small Box Games is no secret, from John and Britt Clowdus’s bold cottage industry business model to their consistently high-quality components and portable boxes (which I haven’t managed to drag along on a vacation yet but absolutely will at some point). My only hangup in this love affair is that I haven’t fallen quite so totally for half of their games — as much as I adored Hemloch and Omen: A Reign of War, I found Tooth & Nail: Factions and Shadow of the Sun a bit wanting. Which is why I’m tickled pink about Stone & Relic, which is every bit as good as my two favorite SBG offerings. Maybe even a bit better. 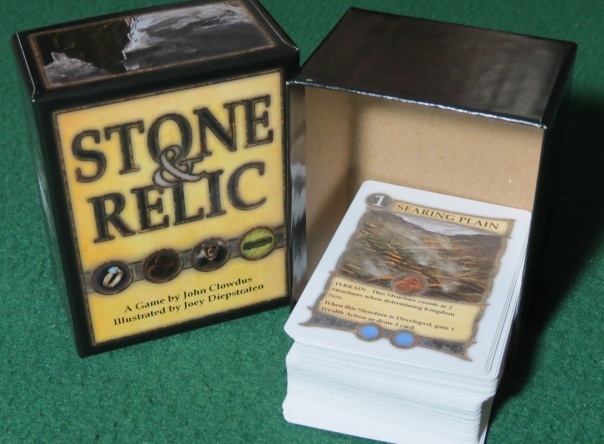 To me, John Clowdus’s designs are at their best when they’re emulating miniature combustion engines — and now that I’ve got a soundbite, hold on while I force this metaphor into comprehensibility.

See, these games are tooled from simple and memorable mechanics. Their fuel is a complex sets of cards, which have great potential energy output since every single one of them can be used in multiple ways — and to succeed, you’d do well to master each and every possible combination, because the path to victory isn’t always a straight road. In fact, it’s often the road less traveled, choked with weeds, and revving that engine is a must in order to get anywhere fast.

Alright, enough of that.

What I’m trying to say is that the Small Box Games I like best fall into a certain category. Hemloch and Omen: A Reign of War both provided a simple goal (to earn the most victory points) and multiple valid avenues to reach it (filching artifacts, taking control of cities, gaining the favor of the gods, etc.), whereas the less appealing ones struck me as weaker because they offered fewer options, or had easily discernible optimal routes to victory, or came down too much to the luck of the draw or the turn order. But at their best, John Clowdus’s designs are elegant.

Stone & Relic succeeds because it’s deviously elegant too. Once again, your goal is to earn more points than anyone else, and victory is achieved by juggling multiple interests, and using your cards in many (and non-obvious) ways.

Each card in Stone & Relic represents a piece of your kingdom, stuff like wide expanses of terrain, castles, altars, monuments. In a clever move, the back of every card shows a city, which terrain cards can be upgraded to create, though they’ll lose their unique properties in the process (this strikes me as tragically accurate).

Your goal, as I mentioned, is to use these cards to accumulate points, which you can pick up from one of four sources.

The most visible source is those kingdom cards themselves, each of which has a point value. Most are worth 1 or 2, though some are worth ?, which can mean a couple things — usually that they’re worth however many cities or terrain cards they’re adjacent to at the end of the game, or as many similar cards as you’ve built into your kingdom. Cities are worth a considerable 3 points, though as I said, at times it’s agonizing to build cities because of what you’re trading away in the process. Furthermore, at the end of the game, whoever is in command of the largest kingdom gets a bonus of 5 points, which isn’t enough to win the game on alone, but can often push you over the edge if your kingdom has been building apace with those of your opponents. 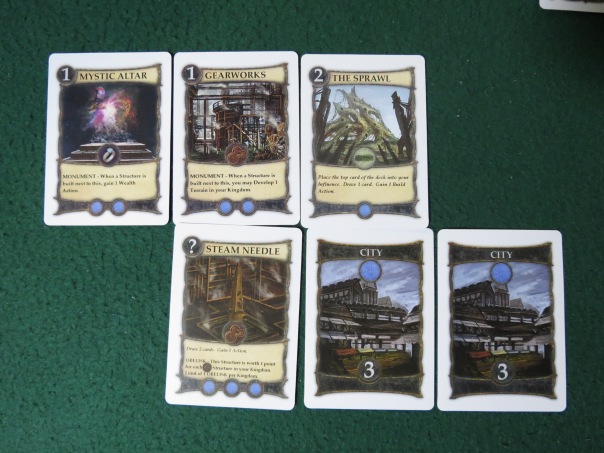 That’s not all! Not only are you building your kingdom and meticulously keeping track of how large it is compared to everybody else (and while you want it to be bigger at the end of the game, you also want it to be smaller if possible the rest of the time, because the smaller kingdoms get to draw more cards at the beginning of their turns), but you’re also dumping cards into two other point sources. The first is your wealth pile, face-down to the side of your kingdom and totally worthless — except for the fact that at the end of the game, the player with the greatest wealth (determined by the blue dots on the bottom of each card) gets an attractive 7 points for their incredible “prosperity.”

And then there are the relics, visible in the center of the board and worth 5 points each, and just waiting for you to invest gobs of cards into claiming them.

At first all these opportunities are liberating, and you’re dipping your toes into each pool and thinking Stone & Relic maybe seems a bit flabby, a bit too generous with its options. Soon enough though, your opponents are nettling you across every theater. Your kingdom might be the most impressive on the table, but suddenly your girlfriend is investing in her wealth and you realize you only have a couple cards over there, and her brother is micromanaging a smaller but higher-scoring kingdom, and your spare change friend is using abilities to mess with your hand and influence the outcome of the relic bid.

Right then you realize: Stone & Relic is a tightrope race. And the funambulists are allowed to poke each other with their balancing poles.

Add to all that the fact that every card holds multiple value. Everything can be built into your kingdom. Many structures can be developed into cities, or cast as spells, or have variable values in the race to accumulate wealth or relics, or used to pull off incredible combos that will make your opponents’ eyes glaze over as they try to keep track of all the different steps.

It’s incredibly tight. And in addition to taking maybe half an hour to play, it’s easy to get a hang of — each turn consists of a resource step (draw cards, gain actions), an expansion step (spend your actions and cards to build new structures, develop cities, cast spells, or invest in your wealth or relic influence), and another influence step (those relics become crucial as the game progresses), and that’s it.

Are there downsides? I dunno. Some folks have pointed out that there’s less direct conflict than other Small Box Games offer. There are definitely many ways to mess with your friends, often in the form of spell cards or just the sheer psychology of putting more into your wealth or relic influence piles than they are, even if your cards don’t hold particularly high values. In general though, it does tend to be less confrontational than Hemloch or Omen: A Reign of War, which may appeal more or less depending on how well you like directly attacking other players. My personal stance is that I like variety, I already own those other higher-conflict games, and sometimes a bit less fighting is exactly what a game night needs after a tense backstabbing game. 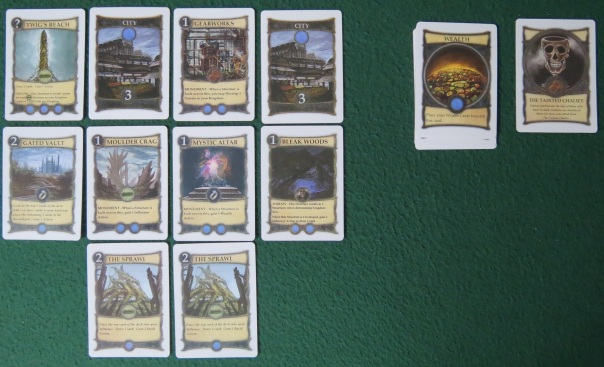 So my final score is a match in which I win all four relics, take the Largest Kingdom and Prosperity bonuses, and come in with a final total of over 50 points. Which is to say, pretty damn awesome.

Posted on March 11, 2013, in Board Game and tagged Board Games, Small Box Games, Stone & Relic, The Board Game Box Review, The Fruits of Kickstarter. Bookmark the permalink. 11 Comments.

← A Valley Without Wind 2: Panic in the Ranks
A Survivor/Killer is Born →