← Roll Through the Equal Rights Amendment
(Un)Match This →

You might recall a game from last year by the name of War Chest. Designed by Trevor Benjamin and David Thompson, War Chest was lavishly produced but fell prey to the same problem that plagues many modern abstract games. Namely, it lost sight of the joys of outmaneuvering an opponent by focusing too heavily on attritional tit for tat.

Undaunted: Normandy, by the same design duo, also tends to dwell on matters of attrition. In some ways it feels like an exploration of the same design space, despite differences of setting and even the lion’s share of its underlying systems. Here is another game by Benjamin and Thompson that features a flexible but finite pool of units, which might eventually become so depleted that they’re left sitting on the board with nothing to do but absorb another hit.

But here’s the thing — Undaunted: Normandy works. In fact, it’s a masterclass in how to put attrition front and center without strangling a game’s momentum.

Before we get into comparisons, let’s talk a little bit about what Undaunted is doing and why it works so well.

Okay, so the setting is World War II. You know, the big one. The Other War to End All Wars. The one where the guy with the Charlie Chaplin mustache declares vendetta against the entire planet. Not that any of that sneaks its way into Undaunted. If anything, this is one of those perfect examples of why setting and theme are distinct things. Thematically, Undaunted doesn’t say much. You aren’t going to come away with a deeper understanding of accurate squad composition, or the difficulties of hedgerow skirmishes, or why this conflict was, broadly speaking, “righteous.” The game could have been Orcs vs. Soccer Moms and spoken as much truth.

But as a setting, WW2 does Undaunted a service. The goodies and baddies are sorted into sides according to the shades of their uniforms. There’s an inherent defensive difference between a field and a brick house. The units behave in intuitive ways thanks to nearly a century of war movies. For instance, you will never forget that a mortar is for dispersing tight clusters of foes, a sniper can root out entrenched enemies, and a machinegun can force a squad to keep their heads down. You know this stuff because it’s written into our cultural DNA.

As a light wargame — and we’re talking very light right now — Undaunted even knows how to provide choices without bogging you down in minutiae. At its most basic, you play a card to perform one of that card’s actions. A gunner can move to an adjacent space, attack, or perform suppression fire. Riflemen move, attack, or take control of a contested zone. Scouts can also attack (I mean, everybody can attack, it’s war), perform reconnaissance to allow other units to move, or fudge around with your deck.

Every unit type has a distinct purpose.

That’s right, your deck. Undaunted is a hybrid deck-builder and tactical combat game, an equal split between managing your roster and skirmishing with the units you’ve deployed onto the map. And although this is every bit as light as the game’s warfare, it offers enough possibilities and hiccups that it never feels too straightforward.

Every round goes like this. Both players draw four cards and choose one to wager. This card will be lost, but whoever plays the higher number will go first. Right away, the wheels are turning. Better units have higher initiative numbers, but, well, they’re also better units. It’s always tempting to dump a low-value Fog of War card. These are added to your deck whenever your scouts recon a new space, increasing your maneuverability but also thinning your deck with junk. But going first isn’t negligible, especially if you’re hoping to use units right away. Before, say, your opponent shoots them.

This is where we arrive at the crux of Undaunted’s deck-building. Rather than delivering a predictable deck — meaning a deck that’s traditionally predictable, with you wielding ultimate control over what you’ve built into it — these decks are in a state of constant transition. Certain cards, like squad leaders or platoon sergeants, exist to add new units to your deck from the pool beside the map. This isn’t to say you’ll have massive numbers on the board; not every card adds a chit to the table. Instead, duplicate cards represent the growing strength of a single unit. The more of that unit’s cards you pack into your deck, the more often you’re drawing them, and therefore the more often you’re moving or fighting. Four riflemen in Squad A will battle twice as often as an opposing squad with only two cards.

This goes yet another step, because taking a  hit also forfeits a card. When a unit is successfully shot (or stabbed, or blown up), you’re forced to permanently remove a corresponding card from your deck. Worse, this must come from your hand if possible, losing its potential action if you’re the second player this round. It pays to tend to your initiative.

This has… well, a lot of effects. It’s entirely possible to have a unit with loads of cards in your deck, meaning it will blitz around like a superhero, sometimes even acting multiple times in a single round. It’s also possible a unit will have no cards left over. That unit is now a sitting duck, good only for drawing fire or preventing an enemy from capturing a zone until they’re finished off or you acquire more cards to get them moving again. At every level, there are both deck-building and tactical considerations to keep in mind. For example, diversity isn’t always a good idea. After all, the bigger your pool, the less often you’ll see any particular unit. At other times, you’re fighting on multiple fronts, and your only hope is to carefully invest in the right squads to keep your war machine going.

This blended approach to deck-building and tactical combat also has two immediate effects, one above board and the other beneath the hood.

The more noticeable benefit is that every unit has a place in your platoon. The early trio of riflemen, gunners, and scouts are all essential. Scouts recon spaces so everyone else can move into them, gunners keep your enemies suppressed — forcing their owner to discard a card to stand them back up — while riflemen are fragile but necessary for capturing objectives. More advanced units fall into support roles, but these are no less vital. Snipers roll tons of dice, making them perfect for rooting out foes in dense terrain, mortars excel at bombarding clustered enemies, and off-map units like platoon guides nudge around your other units. Don’t laugh. In a game where movement is precious, that may be the most potent of them all.

(As a side note, Undaunted’s scenario book takes way too long to show off its coolest toys. The earliest scenarios only provide riflemen and scouts, and successive levels linger over a single addition at a time. For best results, skip forward as soon as you’re comfortable with how the game works.)

More subtle is the way the game leverages its attrition to tremendous effect. War Chest did something similar, with new chips either acting as units on the table or commands drawn at random from a bag. That’s only one step away from cards peeled off the top of a deck. So what’s the crucial difference?

Foremost, there’s a scope to Undaunted that wasn’t possible in War Chest. Although the battlefields don’t exactly sprawl, there’s nearly always room to maneuver, space enough to contain a wide array of squads, and those squads are as large or lean as you’ve built them. There’s a hard limit to the men you can recruit, of course, but it’s rare that the field will be reduced to the point that the outcome hinges entirely on one side lacking manpower. Attrition is a feature of winning, but it isn’t the only feature. Those who build focused squads, evaluate their odds, and press forward into victory zones will usually emerge triumphant.

Deciding what to play for initiative.

The game also pulls a minor thematic trick that goes a long way. While every card in a particular squad is given the same posture for visual legibility, the minor details are different. A pencil mustache, a five o’clock shadow, the cut of their cheek bones. And underneath that, the soldier’s name written in cursive. When you take a hit, you’re losing more than a hit point, more even than a card from your deck. You’re losing an individual. I’ve played plenty of tactical games that made me feel a unit’s absence by the vacuum left in its wake; very few have made me feel a blow because I appreciate the dubious expression on Ernst Seidel’s face. He didn’t even want to be here. Now he’s nowhere. Unless his corpse counts. Then he’s right there in the dead pile with everybody else I’ve blundered into mortar fire.

Not that being mortared is a guaranteed hit. Also unlike War Chest, every attack in Undaunted is a question of odds and outcomes, which lends an extra dimension of thrill to its casualties. Fortunately, these are easy enough to parse, despite some counting. Range plus a unit’s natural defense plus the defense of their tile: that’s your target on a ten-sided die. The upshot is that every attack is easy to evaluate. What’s the difference between a shot against a target with defense seven and defense eight? Ten percent. Those are more gaugeable odds than any d6 will give you.

When you get right down to it, much of the game is about managing risk. Intersecting risks, really. Can you take that victory zone before enemy gunners shred your rifle squad? Can that chit last another few rounds before you fill it out with replacements, or will it be removed and have to hustle back from the far end of the map? Can you rush into an enemy zone to lower your target’s defense value, or is that suicide? There are plenty of angles to consider, and rarely do any of them come parcel with obvious solutions. 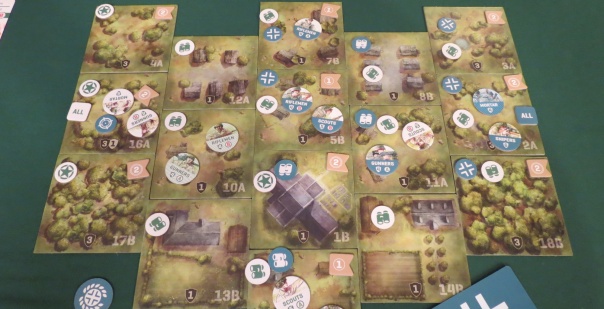 If anything, Undaunted’s omissions are its weakest aspects. Or maybe that’s just me pining for more. Assault squads, vehicles, special powers added to your hand — the system practically begs for new units and cards, and the right ones could go a long way toward breaking up the “sit and roll dice at each other” stalemates the gameplay nods toward more often than I’d like.

As a demonstration of Benjamin and Thompson’s system, however, Undaunted gets it mostly right the first time around. This might not be the world’s most insightful WW2 game, but it shows no sign of wanting to be. Instead, it’s an excellent hybrid deck-builder and tactical game, intermarrying two distinct spheres into a coherent whole and ensuring that the considerations of the one bleed naturally into the other. Apparently a second set will be landing sometime next year. If Undaunted: Normandy is anything to go by, this could be the beginning of something truly special.

Posted on October 8, 2019, in Board Game and tagged Board Games, Osprey Games, Undaunted: Normandy. Bookmark the permalink. 11 Comments.

← Roll Through the Equal Rights Amendment
(Un)Match This →