← Neither Race Nor Roll
MeowMeowBeenz: The Game →

From Beau Beckett and Jeph Stahl, the creative duo behind 1812: The Invasion of Canada, 1775: Rebellion, 1754: Conquest, and 878: Vikings, comes their most important and serious cultural contribution yet—

A game in which you say “dude.”

And although it would be easy to repurpose the game’s tagline for my review — “it’s a game where you say dude” says everything about how amusing you’ll find it — I have opinions. Though most of them deal more with the sequel. Yes, you read that right: this game already has a sequel.

Right up front, you need to understand that Dude is dumb. Like, stupidly dumb. So dumb that its title is technically dude. Lowercase dude. Dumb dude.

The reason dude — sorry, Dude, I’ll die inside if I keep writing it that way — the reason it gets a pass is because its dumbness is wholly intentional. Sure, some won’t accept that as an excuse, and heaven forbid it should ever meet anyone who complained at length that The Mind isn’t a game. But there is something to be said for intent, especially when Dude revels with such unrestrained delight at the humilities it visits upon a circle of nerds barking at each other in the interests of winning a game.

Ready to hear how dumb it is? Here goes:

I’m not being facetious. That’s the whole thing. You say dude, repeatedly, until you have successfully said dude enough that you are crowned the king of the dude-sayers.

So what’s the trick? Well, the idea is nearly identical to Happy Salmon. You have a hand of twelve cards, each of which says dude, albeit in slightly different ways. To get rid of those cards, you need to find somebody else at the table who is also saying dude, but only in the same way that you’re saying dude. Make a proper match (solemnized by gazing into one another’s eyes and whispering “sweet”) and the card is dismissed from your hand.

If that sounds nonsensical, consider the various dudes:

dude.
dude?
dude (in tiny font that I can’t figure out how to format)
dewd
dooode
dude

Yeah. Dumb. But while there are plenty of games about the ambiguity of interpreting words and images, Dude is about the ambiguity of interpreting vocal inflection. There’s an obvious difference between finishing dude with a question mark and a period, but what about the difference between dewd, dooode, and a psychedelic rendering? Ensconced within an anechoic chamber those subtle cues might be obvious; when everybody at the table is squawking them at the same time, increasing in volume and intensity, mistakes will be made.

It isn’t exactly high art, but it is silly enough to get everybody laughing. At the very least it’s a useful litmus test for separating your friends into those who take themselves too seriously and those who don’t mind yelping dude for three minutes. 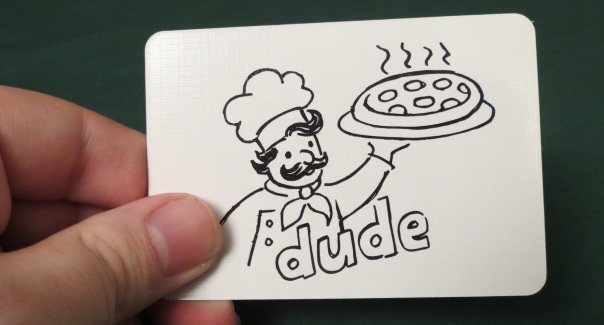 The point is, the way Dude investigates lingual ambiguity is both a reliable wading pool for party games and just different enough that it feels fresh. I mean, let’s not go crazy here: it’s still a game where you say dude. It isn’t reinventing word puzzlers or anything.

In fact, it’s such a peculiar topic that its sequel, More Dude, is surprisingly less dude than the original. Rather than focusing on inflection, it’s more about silly accents, prompting you to utter its hallowed syllable like a cowboy, surfer, robot, pirate, ghost, or pizza chef (i.e. Mario). Not only are these easier to hear and interpret, they’re also simply less fun than belching dude at each other. Equally dumb, but far less enjoyable.

(If what I’m doing at Space-Biff! is valuable to you in some way, please consider dropping by my Patreon campaign or Ko-fi. If I reach one hundred supporters in the next two weeks, I will record a video of me saying “dude” in each of Dude’s six inflections.)

Posted on January 21, 2019, in Board Game and tagged Board Games, Dude, North Star Games. Bookmark the permalink. 4 Comments.

← Neither Race Nor Roll
MeowMeowBeenz: The Game →