← Specter Oops They Did It Again
Introducing the Space-Biff! Book-Space! →

There’s something about Grant Rodiek’s most recent designs that’s equally bold and foolhardy. Bold, because he’s willing to toy with our preconceptions about tried-and-true game systems to an extreme that most designers would balk at. And foolhardy for, well, pretty much the same reason. Whether you’re drafting somebody else’s cards in Solstice/Imperius or fumbling with the blind wagers and multi-use cards of Five Ravens, you can wager green money that his games will see you doing something familiar in an entirely unfamiliar way.

Enter SPQF. It’s a history pun, standing for the Senatus Populusque Forest — while gleefully disregarding that a Latin forest doesn’t begin with “F.” And it’s a Disney’s Robin Hood’s take on deck- and civilization-building with a Rodiek twist: cute animals, familiar concepts, and one bear of a first play. 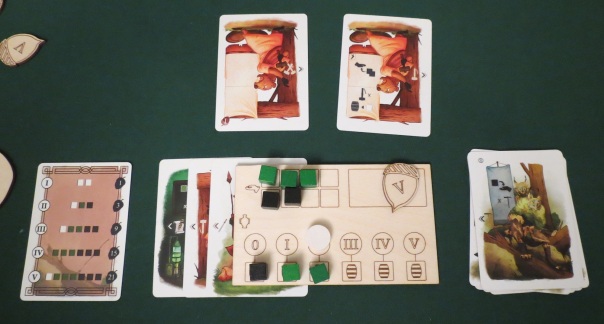 Sort of like a bear cub, at a distance there isn’t much to indicate why SPQF poses such a threat. As the guiding spirit of a cheerful forest republic, it’s your task to build, harvest, conquer, and orate your way to victory — as forest animals are wont — and your time is spent going through the usual deck-building motions. You’ll recruit and discard cards, play them for their actions, and sometimes amass resources or improve your civilization level or gather acorns. Nothing out of the ordinary, right?

Its first surprise is that your deck is unusually fluid. Each turn sees you playing a card and acquiring a card, but both decisions are informed by a heap of considerations.

Let’s start with the card you play. Nearly every card provides two actions, one that can be followed and one that can’t. By “followed,” I mean it can be boosted, both by you and other players. You might, for example, play a card that gives you some iron. For every pickaxe you follow it with, you get more — so, by laying down a lot of pickaxes, you gain a lot of iron, whereas the lonely pickaxe on the card itself would only give you one nugget.

Meanwhile, everyone else at the table gets a chance to also follow your card. Just like that, they’ve used a pickaxe to gain some iron for themselves. Neato! Sure, their hand is now diminished. But since they only get to play a single card on their turn, using a card to follow somebody else’s action doesn’t necessarily have a downside.

At any given time, there’s likely more than one market to select a card from.

Wait — so you only get to play one card? In general, yes. Unless you have a card that lets you perform multiple actions, starting a turn with a brimming hand of five cards isn’t strictly more advantageous than only holding one or two.

However, this brings us back to the detail that your deck is always shifting its composition. At the end of your turn, the cards you haven’t used get shunted into your market. There they’ll remain for an entire round, tempting everyone at the table. Whenever somebody acquires a card, they can either nab something from the central market or steal from one of their rivals. Maybe even from you. Like a buffet arrayed overnight on your front porch, don’t be surprised when some critter decides to dig in.

But! This isn’t always a bad thing. After all, not every card is going to be useful to what you’re trying to do with your deck. Putting cards up for sale (up for cross-cultural stealing, rather) is a built-in way to burn away the chaff, and clears up some room for better draws later on. More than that, it also means that when an opponent nabs a card you want, it isn’t necessarily gone forever. Every player is after a particular type of follow symbol, dictated by the “monument” they drew in secret at the start of the game, and most folks won’t be religious about holding onto cards that won’t benefit them once the game concludes. Their loss is your gain, except the loss of a card isn’t always much of a loss. Except when it is. Except when it isn’t.

It’s confusing at first, but all these contrasting systems imbue SPQF with a constant sense of warring against your own deck at the same time that you’re warring against your fellow players. Think of it as systems in tension. The same card at different moments might be the most valuable thing in your deck or utter space-wasting trash.

And that’s just one consideration. Your monument means you want specific icons, but you also need a diversity of cards in order to follow as often as possible. At the same time, you want a manicured deck of powerful options, but also some chaff to throw to the wolves so that you aren’t always losing valuable cards. At the same dang time, you want lots of sexy abilities, while also worrying about how closely your opponents can follow your actions. Upgrading your civilization level when everybody else is already ahead of you — and can afford to follow the upgrade with one of their own — is really just feeding them points. Deck composition is one thing, but timing is every bit as important.

Once you get accustomed to it, the iconography is crisp.

It’s a lot to take in. Don’t think I’m exaggerating when I say that the first two or three plays will be taxing. And while the game’s iconography is perfectly legible, it’s legible the way a game like Race for the Galaxy is legible — as in, totally impenetrable until you’ve learned the language it’s trying to teach you.

And don’t expect any hand-holding, because the path to victory is tangled with distractions. Every card is useful in some way, but their true value is only realized once they’re combined with others. It’s possible to blitz your civilization from hovel to metropolis, leverage stored goods and cards into points, cultivate ridiculous follow synergies, or simply focus on having the best monument. But it takes experience to make any of these happen.

There’s purpose to this madness. Success is the result of clever play at multiple stages, the culmination of a couple dozen crucial decisions, smart card picks, and more often than not, smart picks of what not to play. Unlike deck-building games where you’re allowed to regurgitate your hand onto the table at every opportunity, SPQF rewards restraint more than gluttony.

Like much of Rodiek’s work, there are thematic glimmers to be found here, though you’ll have to dig for them. In SPQF, rather than having your empire or market or whatever develop in isolation, there’s a subtle acknowledgement that cultures develop as much through cross-pollination as via any other means. An idea here, an innovation there, a particular resource or religion or philosophy — more than smart, it’s perceptive.

Also, it makes you feel like a genius when you swipe a card that makes your deck come together. That might be the more important detail.

Each of SPQF’s seven card flavors.

It’s that unflinching cleverness that marks SPQF as one of the best pure deck-builders I’ve played in a very long time. It’s demanding, yes, but the effort is worth the investment. When it clicks, it does so with the clanging force of a blacksmith’s hammer. All those systems in tension, its willingness to break down and rebuild your deck over and over and over again, those first confounding plays — all are essential steps in the process of grasping the subtleties of this marvelous game.

Of Rodiek’s iconoclastic designs, this is the most assured. It’s intelligent, wind-in-your-face brisk, and knows how to pull off a killer combo. And although I dread the prospect of teaching it to newcomers, sometimes you’ve got to tear down Rome in order to build it.

SPQF will be on Kickstarter on Monday.

(If what I’m doing at Space-Biff! is valuable to you in some way, please consider dropping by my Patreon campaign. Like SPQF, I too am wind-in-your-face brisk. I mean, uh. Never mind.)

Posted on July 11, 2018, in Board Game and tagged Board Games, Grant Rodiek, Hyperbole Games, SPQF. Bookmark the permalink. 21 Comments.

← Specter Oops They Did It Again
Introducing the Space-Biff! Book-Space! →