← The Anti-Catan
Together Is Better →

Alone Beneath the Sea

It’s rare enough that a game gets a second chance, let alone when it’s a niche solo title. Based on Jules Verne’s Twenty Thousand Leagues Under the Sea, Nemo’s War held a formidable reputation for its brutal difficulty, constant barrage of dice rolls, and tangible sense of setting. It’s Nemo and his Nautilus against an entire world of colonial powers. And, tipping my hand right now, its polished second edition is easily one of the slickest solo games ever crafted. 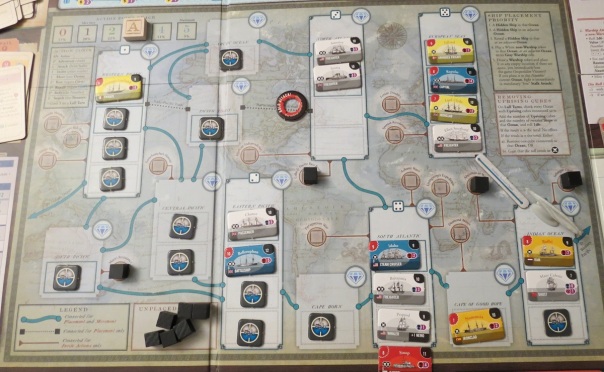 The ocean is lovely, dark and deep.

The central mechanism of Nemo’s War also serves as its most apt disclaimer. Beware all ye who desire to dip your toe in these briny waters, because here there be polyhedrons.

There you have it. From start to finish, every turn will see you chucking at least two sets of dice, and very possibly many more. You’ll have moments of screaming success, those odds-defying triumphs that rattle the table. But also sure-thing failures, slow lull turns, disappointments, setbacks. This is, after all, the journey of a man dedicated to ridding the world of its colonial overlords. And you can’t make an anti-colonial omelet without breaking a few passenger ships or fleeing the occasional battleship.

This constant pressure permeates every single thing you’ll undertake. Those adventures you encounter at the start of every turn? Not only are they randomly drawn, but they also customarily require a dice check. Want to sink an entire convoy? Here, I’ll blow on those dice for you. For luck. You’ll need it. Is it time to raise a rebellion, search for treasure, repair your hull? Fine. Roll for it. In fact, very nearly the only thing that doesn’t require a roll is moving from one sea to another.

My repetition on the matter is less about belaboring the point and more about ensuring you know what you’re getting into. Dice games aren’t for everybody. Some folks were born unlucky. Or burdened with the complainer’s gene.

However, for those who can appreciate a good dice game, the true beauty of Nemo’s War doesn’t lie in how many rolls it boasts, but in how smartly it uses them.

That moment when you’re two ships off from being the scourge of the sea.

Here’s an example. Let’s say the colonial powers have packed the South Atlantic to the brim with their shipping. Every time you want to get something done — hunting for treasure, for instance, or helping out the Paraguayans — all those pesky ships serve to drop your chances of success. You’d rather be nice, but there simply isn’t any alternative but to sink a ship or two.

Right away you’re presented with a crucial choice. You can either stalk one of the buggers at a time, earning a bonus to your roll but restricting yourself to a single target with each attack, or you can embark on a wild voyage of death and destruction. The latter option is more risky than just a lost roll modifier, though, mostly because each successive target gradually increases Nemo’s notoriety, which eventually slips more dangerous ships into your draw bag. Nemo’s War is nothing if not a balancing act, safety weighed against risk, drowned ships against notoriety.

This time, you’re going to be sneaky. The enemy warship gets off a shot and maybe lands a hit or two. Now it’s your turn.

Here’s where things get especially clever. To sink this particular ship, you need to hit an 11 from a pair of six-sided dice. For those among us who loathe counting, those aren’t superb odds. You’ll get +1 from stalking your target, but that’s unlikely to make the difference. Thus, in order to turn the odds ever so slightly in your favor, perhaps you’ll “exert” one of your resources, whether Nemo himself, your long-suffering crew, or your hull.

Just like that, your margin for success grew significantly wider. But wait! Failure doesn’t just mean failure, it also means anything you exerted is going to take a hit. Exert too often and your resources will suffer.

It’s these little decisions — wagers, really — that make Nemo’s War come alive. There aren’t many rolls that can’t be modified, whether by exerting one of those dwindling resources, cashing in some treasure, or asking one of your limited roster of special characters to make the ultimate sacrifice. But for all these safeguards, the danger is never quite erased. There’s always the possibility you’ll roll snake-eyes and wince as the Nautilus takes more of a beating than it would have if you’d just left the odds alone.

Each of the game’s four motives offer their own approaches and feels.

Even the action system is five times cleverer than it needed to be. Each turn, your pool of actions is generated by the difference between two chucked dice. This might sound terribly unfair, and sometimes it can be. But in designer Chris Taylor’s hands, even something as potentially devastating as a double roll (read: zero new actions) becomes a precious “lull.” This is when new opportunities are added to the board and Captain Nemo’s pricier options briefly become affordable. Like that, things like bringing on new crew, repairing the hull, or plugging new upgrades into the Nautilus become doubly worthwhile.

In essence, rolling badly can be desirable. Just make sure you’ve saved an action from the previous turn or you’ll be caught without any wind in your sails.

The danger of all this math-talk is that Nemo’s War might come across as horribly dry, though nothing could be further from the truth. Each turn is as thick with agonizing decisions as an unkempt hull is crusted with barnacles. Should you stalk a boat or take on an entire convoy at once? Search for treasure or make for calmer waters? Continue sinking ships or foment rebellion to decrease your skyrocketing notoriety? Spend your lull turn on an adventure or play it safe with another repair? There are questions aplenty, both spanning multiple turns and within the confines of a single risky roll. Most of them don’t have correct answers so much as ones that will hedge your chances and keep you floating a little while longer.

It also helps that Nemo’s War manages to feel very different depending on which of Captain Nemo’s motives you’re playing with. It’s always a race against the clock and the rules remain unaltered, but a warmonger or anti-colonial revolutionary will be preoccupied with sending ships to the bottom while a benign explorer or scientist will engage in battle much more rarely. Usually when there are a few too many ships blocking a nautical wonder or when you need a bit of extra salvage to invent something wondrous. 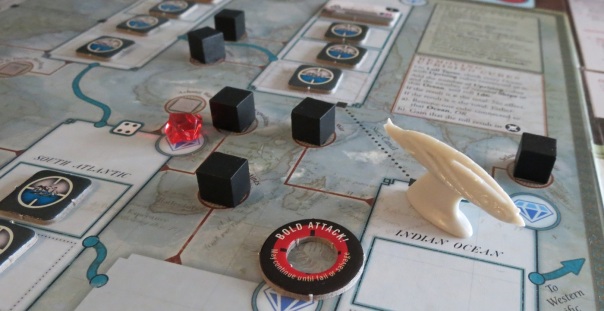 For many solo gamers, Nemo’s War is one of the finest options out there. It’s easily the prettiest thing Victory Point Games has ever offered, if that matters to you. From the feel of the draw bags and the weightiness of the ship tokens to the crispness of the board’s visual design, there’s very little to complain about. The flimsiness of the resource counters, perhaps.

Far more importantly, this is one of those rare dice games that never fails to excite, weaving a narrative that’s both gripping and ever so slightly somber, the tale of a man raging against the callous march of industrial progress. It even features a book of epilogues to spell out exactly how things went for our doomed Captain once the curtains drew to a close. Its sensibilities are roguelike in nature — it’s tough, capricious, likely to end in failure, and each attempt presents new challenges, ships, and likelihoods of disaster. It isn’t a game you’ll win often, and its “triumph” score may elude you for many dozens of plays.

And, shipmate, is it fantastic. It’s rare enough for a solo game to receive such a loving treatment. Snap it up.

Posted on August 10, 2017, in Board Game and tagged Alone Time, Board Games, Nemo's War, The Fruits of Kickstarter, Victory Point Games. Bookmark the permalink. 11 Comments.

← The Anti-Catan
Together Is Better →