One of my favorite books on the topic of the Vietnam War is Frances FitzGerald’s Fire in the Lake: The Vietnamese and the Americans in Vietnam. In it, FitzGerald posits that the United States didn’t lose the war out of failed military achievement or lack of determination, but rather owing to the incompatibility of American and Vietnamese cultures and values. The Vietnamese had weathered a literal millennium as part of Imperial China before regaining their sovereignty — after that, how long could any power expect to remain in Vietnam?

The board game version of Fire in the Lake, the fourth entry in Volko Ruhnke’s lauded COIN Series, has its own answer: about three to five hours, give or take.

Staring each other down across the highlands.

On more than one occasion, usually while chatting with a member of my extended family, they’ll ask if I’ve been playing any interesting games lately. “And not like Monopoly or Settlers of Catan,” they’ll say. “Something that you don’t see every day.” And I’ll mention the COIN Series, how each entry simulates an insurgent war, with police and guerrillas and propaganda and public fatigue playing as big a part as the regular troops that make up the bulk of your average boardgamery. Usually by the time I mention that each faction has their own set of actions, and how the guerrillas can be “active” or “underground,” determining whether the government forces can root them out or if they will have to painstakingly locate them first, my listener’s eyes have glazed over. “Sounds complicated,” they say. Then they change the subject.

Of course, the takeaway is that the games of the COIN Series have always been best expressed in the form of examples rather than as mechanical explanations. The COIN system is fantastic at giving real depth to its simulations of insurgent/counter-insurgent warfare, but the really fascinating bits are almost always the way the system gives rise to these agonizing moments of decision-making muddiness.

So please, bear with me while I give you a big example of just one turn from Fire in the Lake.

The NVA masses along the border.

One recent game saw me taking control of the good old stars-and-stripes US of A. My goal — as everybody is pursuing their own agenda in Fire in the Lake — was twofold: change the hearts and minds of the people to reflect my homegrown American values of liberty and democracy (or at the absolute minimum not-communism), and do it with as few troops as possible so as to not overly agitate the anti-war ingrates back at home. I’d like to say the problem was similarly twofold, but in reality it was more like tenfold. For one thing, our allies, the southern Republic of Vietnam, had begun working against us. In subtle ways, of course, because they had a very different notion of what “controlling Vietnam” meant. While I wanted to persuade people to like us, they pretty much wanted to control them, to keep them quiet. And unfortunately for that course of action, the Viet Cong were doing a great job of blowing up the very soldiery that the Republic needed to keep everything calm.

Thus, my tenfold problem. While I’d done a generally good job of securing the Southeast and the regions by the DMZ, everywhere else desperately needed shoring-up. The fertile Mekong Delta in the far south was overrun with Viet Cong guerrillas hiding in their dug-in bases, the highlands were similarly riddled with insurgents that we could see but couldn’t spare the manpower to root out, there were agitators hiding out in the cities of An Loc and Can Tho and even Saigon itself, and would you please just work with me? Of course, the Republic player just shrugged his shoulders noncommittally. Not that I could blame him. After all, if I managed to win, it would still count as him losing.

To make matters even more terrifying, the NVA had largely been staying out of the conflict up until now. Oh, I’d sent a couple illegal excursions across the border into Cambodia, and I’d been bombing the Ho Chi Minh Trail with some regularity. But over the course of the past few rounds, the angry red cubes of the North Vietnamese Army had become glaring rows of threatening tigers’ eyes peering out at me from the jungle-fronds, licking their lips in anticipation. I could sense their excitement in that player’s silence, in the way he took his moves without speaking or returning anyone’s jibes. He was coming for us, and soon. I could feel it.

The developing capabilities of the USA.

This turn, my real problem was in the cards. See, Fire in the Lake is a card-driven wargame, and as in the other entries in the COIN Series before it, there are two cards visible at any given time, one happening now and the other about to happen next turn. These determine the order the factions can act, and only two factions can act at any given time — and if you act this turn, you’ll be ineligible to act next time.

Okay, sorry Uncle Ben, I can see your eyes glazing over. I’ll break it down.

The card for this turn announced that I could parlay with the local Tribesmen, mostly to try and sway the hunter-gatherer Montagnards onto my side. If I did, opting to claim the card’s event rather than taking a normal action like training troops or attacking rebels, then the Montagnards would help me wipe out a handful of insurgents, which would be a huge help up in the highlands where the Viet Cong were really dug in. Hence the first choice: do I take a normal action, or enlist the Montagnards? To make the question more difficult, if I didn’t respond to the Montagnards, it was possible that my opposition would, luring them over to their side and further entrenching in the highlands. They would even get to sway a space over to “active opposition,” which is pretty much the opposite of what my hearts and minds strategy calls for. Oof.

If it sounds like a no-brainer — “Go hire them Montagnards then!” you might be shouting — then chew on this. Next turn’s card is the proposed Operation Attleboro, which if I take it will allow me to move into a region and burn out a tunneled base, which is normally extremely difficult. If I parlay with the Montagnards now, not only will I not be able to take next turn’s event, but my opposition might choose to claim it instead — in which case they’ll turn it around and kill a bunch of my troops near one of their tunneled bases. Ouch.

What to do, what to do? I can’t remember which option I chose, but I can guarantee this:

It was the wrong one. 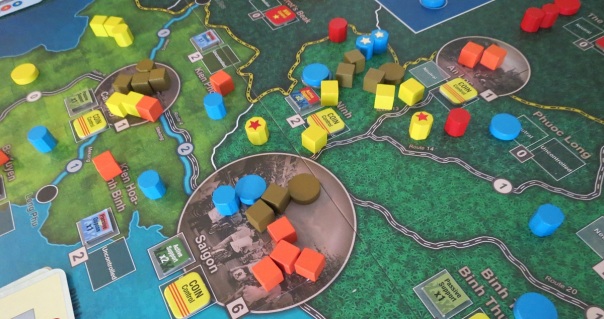 The thing that gives Fire in the Lake such a deft hand is that I wasn’t the only player wrestling with myself. At the same time, the Republic player was muttering about how close I was to winning and was planning a massive strike out from Saigon to retake the Mekong Delta, though he’d be damned before he told me about it. The Viet Cong player was grumbling about how both of those events hurt him and he couldn’t possibly recover, though you can bet your last squeeze of bug-juice that he was hatching a plan to exploit our weakness in the highlands. And the North Vietnamese player… well, he was sitting in silence, ignoring the Viet Cong’s requests for assistance and plotting his major invasion — but never quite sure when to strike, and thinking how unfair it was that his sub-par troops somehow managed to get themselves killed en masse even when winning battles.

As with all the COIN titles before it, Fire in the Lake is masterful like that. It’s a faithful recreation of the tension of those insurgent moments when you can see your opponent, you know at least generally where he is, but you cannot figure out how on earth to get over there and kill him. Unlike most other games, pulling off a good turn doesn’t mean you simply strung together a pair of well-matched actions; instead, it means you planned five or six moves in advance, rode the wave of chaos brought on by the event cards, and sprung your trap at the best possible moment considering the circumstances.

The NVA slips past the DMZ.

That’s Fire in the Lake, a game about diplomacy, frustration, chaos, control. It’s a bit more complicated than previous entries courtesy of a non-government faction getting conventional forces of its own and the non-insurgents getting their hands on guerrilla-type troops, but anyone familiar with the system should be able to figure out the changes in no time. Other than that, yes, it can run long, and it’s a bit tough to learn, sometimes tricky to track everything, and often frustrating as you come within an inch of victory time and again only to have it snatched away at the last possible moment, but it’s still one of the best uses of the COIN Series thus far. It isn’t my favorite game in the COIN Series — that distinction still belongs to Cuba Libre, mostly because it lets me play as mobster Meyer Lansky — but at this point it’s my second-favorite, fulfilling precisely what I want out of a game about the quagmire known as the Vietnam War.

Posted on November 20, 2014, in Board Game and tagged Board Games, COIN Series, Fire in the Lake, GMT Games. Bookmark the permalink. 10 Comments.