Get Ready to Make an Impulse Purchase

“Impulse” doesn’t feel like a very good title for Impulse, the newest game by Carl Chudyk, whose previous games I didn’t play but probably will now that I’ve played Impulse. While I realize they’re going for the “driving force” definition, especially since the game’s impulse track is what enables all of your potential actions, “Impulse” makes it sound like a game about making snap decisions. And that couldn’t be further from the truth.

“So if you’re such a title genius,” you’re probably thinking, “what’s your title?” Well, yeah, I’ve got one. It’s perfect.

You can’t see it from here, but White Team is playing impulsively.

More seriously, Impulse is a 4X game with a whole lot of that genre’s nonessential fluff pared away. You’ve got exploration in the form of flipped cards, gradual expansion courtesy of the cutest tiny rocket-ship transports and cruisers this side of the galaxy, exploitation of your resources and territory, and eventual extermination of your enemies, provided you don’t figure out some other way to win. However, it’s surprisingly light, quick to play, and all the better for it. As one of my friends noted when I mentioned how it lacks so many of the trappings of the 4X genre, “I was worried about it at first, but halfway through the game I was relieved none of that stuff was in there.”

It’s also a tricky game to master, in part because the sector map isn’t where the bulk of the action takes place. Sure, of course the map is important, as it marks where all your fleets are, not to mention various colonized or undiscovered sectors. Where you position your cruisers to patrol will become of utmost importance, especially if you’ve got an enemy looking to score some easy points by eradicating your transports. Still, 90% of the game happens on the titular impulse itself.

The impulse is Impulse’s most clever innovation. There are ten types of cards in the game, from peaceful options like Mine, Refine, Trade, and Research, to dangerous Sabotage, Command, and Execute actions, and the impulse is a track of four of them. Each turn sees you trimming the oldest from the track and adding a new one — so if you need to move some ships around, you’ll put a Command card on the end. If you need more ships, you might put a Build order on there. Then most of your actions revolve around resolving those four cards in sequence, skipping any you can’t (or don’t want to) resolve.

The trick, then, is that your turn ends and the next player uses the exact same impulse track for his own actions. That Sabotage card felt like a good idea when it let you blow up a couple of his cruisers, but it seems mighty silly now that he’s able to sink your fleet with the very card you added to the track last turn.

This is absurdly clever, especially among veteran gamers who are long accustomed to picking out the best possible action. Now you’re encouraged to figure out which card is (1) the best possible action for yourself, but (2) also the worst possible action for your opponents. For instance, a glance at the board shows you that their transport fleets are already in protected positions, with nowhere better to go. That means maybe it’s a good time to play a Command card that only lets you move transport fleets! Or, if nobody but you is occupying a blue planet, perhaps add a Build card that lets you place ships on blue planets! Or if they outnumber you and you think they’re going to fly into your space next turn, play a Sabotage card to weaken their fleets — better yet, play a Sabotage that lets you destroy transports when you’re adjacent to their transports but they aren’t adjacent to yours. Stuff like that.

Of course, these optimal-but-suboptimal-for-your-enemies moves aren’t always available, so a lot of the time it comes down to doing some good while dealing the least amount of future damage to yourself. It’s a tense balancing act, perfectly building off of Impulse’s simple gameplay and compact sector map.

It gets even cleverer once you figure out how to boost cards. Each action comes with a highlighted number in its text, along with a color and “size” (one, two, or three pips). If you’ve mined (another action) enough cards of the same color, you can boost that highlighted number to make the card more powerful. Which means a green card that says, “Draw 3 size one cards from the deck” can be boosted with green “minerals” until you’re drawing, say, five of those cards. In those cases, you’ll want to add green cards to the impulse because you can exploit them better than your opponents. Too bad, they should have spent more time playing Mine cards.

Minerals for boosting on the left, a tech at the bottom, and a plan on the right.

Once the game really gets going, it’s even possible to side-step the Impulse, though you’ll never break free of its whims altogether. Once per turn you can use a tech, using Research cards to put better options into one of those two tech slots. A second option is to create your own “plan,” a mini-impulse that only benefits you — though only once before it’s discarded and you have to build a new plan from scratch.

Best of all, a smart player will use all three options in a single turn, bouncing from tech to impulse to plan to string together a mega-move. For instance, in one of my most recent games, Somerset jumped from half my score to winning in a single turn. How is this even possible? By using her tech to trade a high-value card for a couple points, the impulse to get into position and refine her minerals into six more, and finally her plan to wage a risky battle that propelled her to the necessary 20 “space prestige.” It was breathtaking in execution, the product of multiple turns of careful, deliberate planning.

And that sort of thing, careful plots and smart planning, is just one of the ways that Impulse perfectly imitates the best 4X games out there. Even the combat portion of the game, which sees you inevitably jockeying for position around the points-generating sector core, is a delightful combination of chance and preparation. See, each cruiser deployed into a fight is assigned a card, and since cards can be of values 1-3, your starting strength is variable. However, then you can add more cards from your hand provided they match the color and size of a card in the impulse, your plan, or your techs. This means that a couple holdout size-3 cards, carefully matched to cards on the table, can swing even the most desperate fight into your favor! 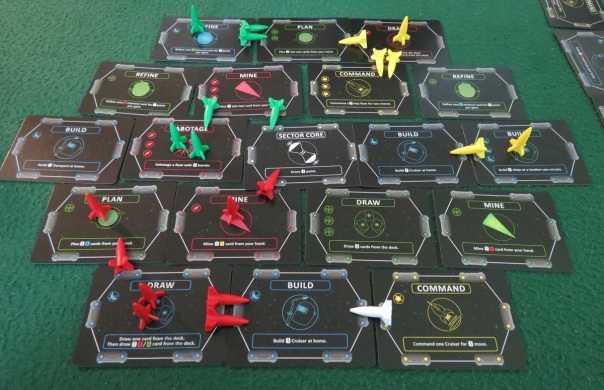 If I had any complaint… well, I really don’t. I think it plays best with 4, though 2 and 6 worked well enough that I wasn’t disappointed. Some people will find it a bit slow and perhaps clunky, especially for your first couple games until everyone gets the hang of how the various phases of each turn work together. It’s a game that rewards the utmost careful planning, so if you’re an impulsive player, Impulse will ironically turn you away with its long-form strategies, and you’ll watch as your tiny empire fails to thrive while massive star-kingdoms gobble up your unprotected territories. Played correctly, however, this is a game where you’ll bide your time in last place, accepting a trickle of one or two points a turn, until all at once you refine a whole bunch of minerals you painstakingly acquired and jump forward 12 points for the win.

And to be honest, I think that’s awesome. Yes, there’s an element of chance in which cards you pull, but there are so many avenues to victory — squatting on the sector core, playing warmonger, colonizing lots of “mine, trade, and refine” planets for points — that I really don’t think a bad draw is going to have much of an impact on a shrewd player. In Impulse, there are no bad draws; only bad exploitations of them. Y’know, usually. I contend that my bad draws really are bad draws. Yours are the mark of an unskilled star-admiral.

Anyway. I wasn’t expecting much from Impulse, especially since it comes in such a tiny box, only about 100 cards and a bunch of colorful rocket ships. To my surprise, it’s one of the biggest games I’ve played this year in terms of clever strategy, innovation, and deliberate planning. Definitely one of my better impulse purchases (zing).

Posted on October 13, 2014, in Board Game and tagged Asmadi Games, Board Games, Impulse. Bookmark the permalink. 7 Comments.