Say one thing about Todd Sanders, say he’s prolific. Not only have we seen him tackle airship combat, fantasy sieges, space exploration, warring mages, the Silk Road, and more, now he’s gone and made a game about… um… letters and puns and… bees and… stuff.

Well. I don’t know exactly how to classify LMNOP. Let’s find out together.

Scoring at the end of a game. Make sense?

In that picture above you can see a tableau of cards. This is at the end of the game, once everything’s been flipped face-up, sorted into matching categories, and scored. And chances are that even though I’ve spared you the confusion of a game in progress, unless you’re either some sort of genius or you’re lying about being one, none of those symbols makes one ounce of sense.

Welcome to LMNOP, “a game of bees and ewes and the rest of the alphabet,” to crib the game’s own description.

The work of Todd Sanders has always been chock-full of his very own iconographic inventions, languages designed to make thematic sense within the worlds they inhabit and to track everything without relying too much on outdated concepts like boring old sentences made of boring old words. But LMNOP shows Todd at his most playful, especially since the entire game is functionally an exercise in decoding and interpreting this language that happens to share a number of symbols with our Latin alphabet. At least for the first few games, LMNOP is about working out the cipher, with the most points going to whomever proved the best translator. Or perhaps the best cryptographer.

Once you’ve cracked the code, the magic dispels a bit and you’re left with a decently amusing game of combo-building. But it’s the two or three games before that moment that interest me most about LMNOP. 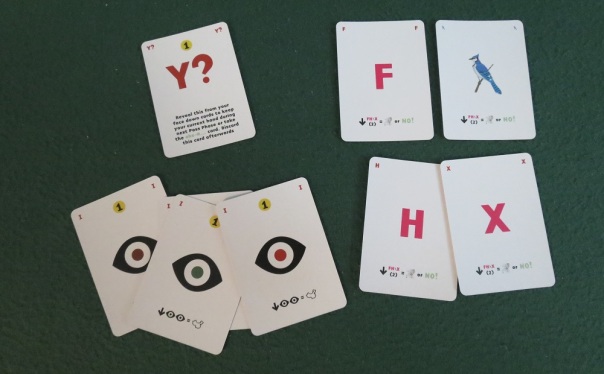 At its most basic — and I’m going to leave a lot out here just in case you want to experience this thing for yourself — LMNOP is about building that tableau. Everyone has a hand of cards, each full of these crazy symbols and letters and what does this one with a lamb on it mean again? There are a few in the middle, ripe for the taking except how do you pick up the Peeking card again? Then you pick one card from your hand, lay it face-down in front of you, and the lead player announces right or left, to indicate which direction everyone will pass their hand. Then you continue, picking one card to add face-down to your tableau, passing your hand right or left, and occasionally flipping cards face-up to activate certain effects.

The cards in the middle reveal some of the game’s best ideas, especially since you’ll have to pick the right cards in order to gain access to them, which in turn requires the aforementioned decoding skills, or at the very least the ability to construct the right combo before someone else claims or blocks it. There’s the Peeking card, which abruptly flips everyone’s tableau face-up, cluing you into everyone’s strategy and potentially blocking certain cards they’d been saving to reveal; or the eL card that lets you swap seats with the player you suspect has been building a superior tableau.

And while you’re playing, there are multiple elements intersecting at once. Language and who can best decode it. Memory, in who can most accurately recall whether to pass right or left to regain the most potent hand. Risk management as you gauge whether to take the best card right now, or hope to see this hand come around again so you can build a better combo later on. Manipulation of the play area through the central cards. And of course, sheer arithmetic.

The titular eL, ahe-M, NO!, and Peeking cards.

I’ve mentioned in the past that board and card games don’t often pull off comedy, because usually once a card game tells you a joke, it can never tell it again. Better to have a game build funny and memorable moments through player interaction than through the words printed on the cards.

This applies a bit to LMNOP, because this is a game best played, I’m convinced, twice. Those first couple plays are a wonder, as everyone at the table fumbles about and puzzles over the meanings of certain symbols and eventually perks up once they figure out a winning strategy. “Aha!” someone will say aloud — and they will say it.

But after that, you will have figured out the best combos, some of which feel distinctly more powerful than others but hardly prove more difficult to achieve, and the confusion over the more peculiar cards has evaporated. It’s still a fun game at that point, and you can’t beat the price of free or the fact that LMNOP is a tiny deck of cards that plays a great matching game in five to ten minutes. But still, this experimental game is at its best, most playful, and most innovative when it’s about, well, the experimentation. The discovery. Learning what the symbols mean and trying to keep them straight. Wondering if you can block your friends and then realizing you don’t even know how you might do that because you aren’t sure which cards are most valuable.

LMNOP isn’t perfect, but it earns my approval nonetheless. It might be a merely good game, but those first couple times are simply excellent.

Posted on May 10, 2014, in Board Game and tagged Air and Nothingness Press, Board Games, LMNOP, Print and Play, Todd Sanders. Bookmark the permalink. 3 Comments.