← The Other Defenders of the Realm
Fallen Kickstarter of Karez →

A Pair of Saboteurs

As most of the board games we cover here on Space-Biff! are comfortable members of the ruin-your-partner’s-evening genre, today I figured we’d take a break from that by looking at a friendly little pair of games that are all about working together, promoting peace, and being superfriends!

Except they’re totally not! They might not look it, but Saboteur and its expansion, the improperly named Saboteur 2 (“2” infers a sequel, not an expansion), are possibly the most devious games ever to sport a happy pipe-smoking grandpa-dwarf on the cover. Little does grandpa-dwarf realize, he’s about to get worked. 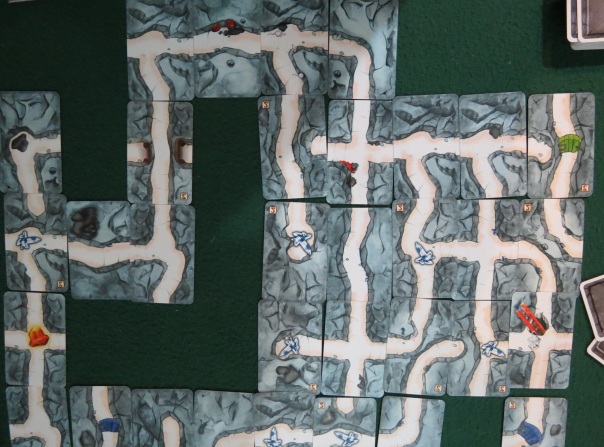 We found the gold! That’s not so good for any saboteurs…

The setup is easy. At one end of the table you lay out a card that shows a ladder going down into a mine shaft. This is the beginning of your dwarven mine, and it’s the jumping point from which you can tunnel in any direction.

A certain distance down the table, you shuffle and then place three face-down cards. One of these hides a gold nugget; the other two, nothing of value.

Everyone gets a hand of cards. Most of these show tunnels that can be added to your mine. Many twist and turn, while others terminate in dead ends. Some bridge over other tunnels, or tap into rich crystal veins, or are blocked by doors. Some house ladders that lead up to the surface and create another entry into your ever-expanding mine. All of these are the cards you’ll use in your quest to dig a subterranean channel to the gold and come home wealthy dwarves.

There are other cards too. Maps, for instance, to make mining life much easier by letting you peek at one of the face-down cards and give you a clue as to the gold’s whereabouts, but there are more nefarious cards too — broken carts, picks, and lamps, for instance, that you can play on other dwarves to keep them from tunneling until they spend precious time and cards fixing or replacing their broken tools. There are also rockfall cards you can use to obliterate a previously-dug tunnel and cut off entire segments of the mine until someone can replace the caved-in section or tunnel around it.

Why would you want to sabotage your fellow miners or collapse the mine itself? Good question. It’s because you might not want this mining operation to succeed at all. 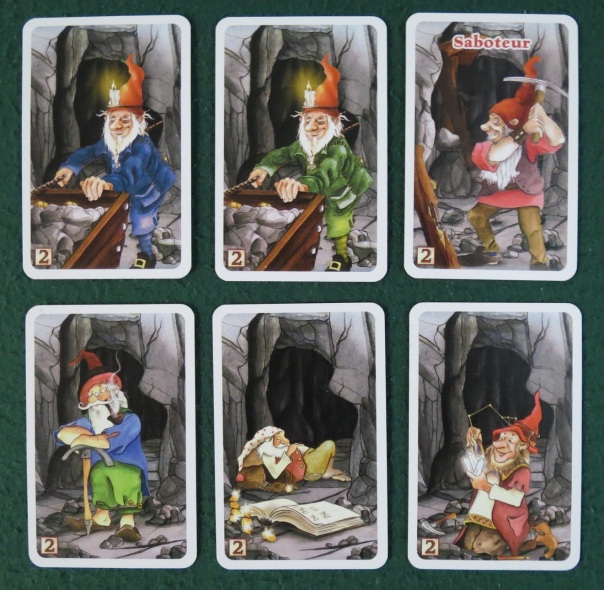 Before you get down to the business of tunneling to the gold like a mouse scouring a maze for cheese, you get a secret role. In the original un-expanded game, there are two: gold-diggers, whose sole purpose in life is to, well, dig their way to the gold; and saboteurs, who want the mine to flounder long enough that the draw deck runs out and the dwarven mining company gives up hope and moves on to other prospects. Since gold-diggers and saboteurs are natural enemies, a game of Saboteur is filled with players constantly checking each other’s actions, shouting “Saboteur!” across the table, and breaking lanterns like it’s going out of style.

The expansion adds even more mayhem, and transforms Saboteur from a good concept into a fantastic game. In addition to gold-diggers and saboteurs, there’s a whole mess of roles for players to blunder through. Instead of just gold-diggers, for instance, there are two competing teams of miners, and both want to reach the gold first — or maybe even put a color-coded door in the way to block the other team from getting their share of the gold once it’s found. Suddenly, even the good guys are jerks.

That’s not all. There’s also a boss who doesn’t much care whether the green or blue gold-diggers win, just so long as someone finds the gold. He’s probably the closest thing to a “good guy,” though of course his motivations are purely selfish. The profiteer is another jerk character who was probably invented when the game’s designer had the same lawn-care boy as me, because he gets paid an hourly wage no matter who wins — though unfortunately for him, it’s minimum wage. Lastly, the geologist gets a commission when crystals are uncovered, meaning he wants this mine to be as sprawling as possible. He often gets confused for a saboteur because he likes to make sure the gold-diggers don’t shape an easy path to the gold.

But if you’re interested, I really recommend picking up both. Saboteur 2 completes the package by adding so much delicious uncertainty to the game. It’s nothing short of joy when you look around the table and realize you’re adrift in a sea of possible identities, and you have no idea which roles your friends and loved ones are playing tonight. And rather than everyone falling into the “good guy” versus “traitor” mechanic that’s popular in games like Battlestar Galactica or The Resistance, everyone’s a selfish git, working against everybody else and looking out for number one. So what if you’re reasonably certain your husband is a gold-digger? Even if you can count on him wanting to reach the gold at all, can you be sure he isn’t on the opposing green team? And when you keep removing the axle from Dana’s cart, are you putting an end to the saboteur’s shenanigans, or are you just messing with a relatively harmless geologist?

Best of all, the game plays so quickly that it doesn’t wrap up with a single mine or with just one role. Rather, you play through three full rounds before the final score in gold is tallied.

To really get the beauty of this, you know how everyone always says you shouldn’t carry your personal life into your board gaming, but you absolutely do? I mean, you’re not an ass about it or anything, but it’s not like your memory is wiped every time you sit down to play a game, and you have some pretty clear recollections about how Steve screwed you out of a win last week. So sure, you’ll “play your role,” but if the chance presents itself, you are going to obliterate him.

Well, Saboteur formalizes this feeling. Crystallizes it. The instant you start digging that second mine, everyone is already carrying around memories and grudges and friendships from the previous one, even though now they’re in completely new roles. Old allies could be new enemies, or the person you want revenge against might now be your foreman who’s trying to coax you into earning more points. Or that dude who you don’t know all that well, the one who made it easy in the first two rounds by being the geologist and then the profiteer, and now he’s sitting on a wad of cash while everyone else is scrabbling for gold dust — all you know is that you want him broke by the end of the game. 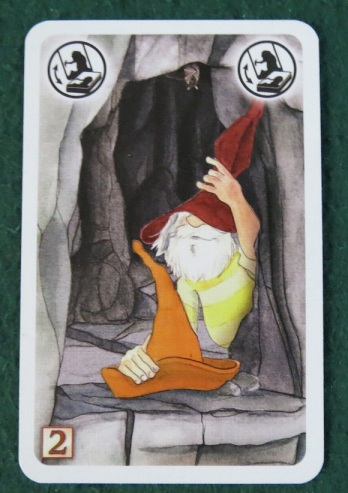 Consider leaving this card out if you like planning.

Saboteur with the expansion is fantastic, and I wholeheartedly recommend it.

If there’s any one thing holding it back, it’s the moronic “Swap Your Hats” card that makes you discard your secret role and take another. I get why it was included — it’s intended as a soft-core game, after all.

But it isn’t soft-core. Not at all. It’s as hardcore as they come, it’s just dressed up all pretty. Trust me, playing an entire round as a saboteur and doing a fine job of keeping everyone on edge but completely in the dark about who’s messing up the mine (“I swear, these dang cards! Not a straight tunnel on any of them!”), and then having someone drop this stupid card on you like a stink-pickle from heaven and now you’ve magically transformed into a gold-digger in a hopeless mine… it’s nothing short of infuriating.

So buy both Saboteur and its expansion, and love the hell out of them. But make sure you take out that damn card before you play.

Posted on July 17, 2013, in Board Game and tagged Board Games, Saboteur, Z-Man Games. Bookmark the permalink. 2 Comments.

← The Other Defenders of the Realm
Fallen Kickstarter of Karez →