← The Ladies of Andor
The Organ Trail, Part Two: The Road →

The Organ Trail, Part One: Clements

Alright, let’s get the clichés out of the way right now, shall we? Yes, this is a zombie story. Yes, it’s also the story of how I died — is there any other type of zombie story, when you get right down to it? And yeah, I’m not too chuffed about the whole debacle.

Why not? Because it’s the story of how I died. I mean, come on. How can you expect someone to have fun with that sort of thing? 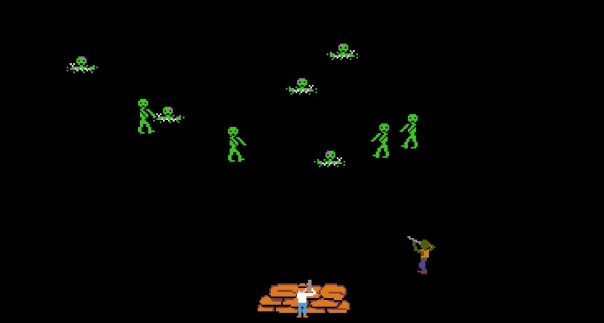 I guess I could tell you it began when the first outbreaks happened in India or China or one of those other crowded Far Eastern places where there’s really no containing a zombie outbreak, but I didn’t know anything about any undead back then. Or I could talk about how it started with my sister trying to chew off my face in our family home in Baltimore (she’d already polished off the family dog and half of grandma. She never did know when to stop), but that wouldn’t be exactly right either. Maybe my story begins with me dragging my fat ass huffing and puffing through a part of the city I wouldn’t have dared stroll through just a week earlier. But I don’t think so. And only in part because I like talking about my fat ass about as much as you probably like hearing about it.

Instead, I think the right start is with Clements. Clements and his crazy dream.

I’d holed up in a safe enough outside of D.C. with a fair view of every approach. I thought I’d brought enough ammo and supplies to last until the apocalypse came — or wrapped up, is probably a better way of putting it. Turns out fifty bullets isn’t all that much when there are a hundred thousand zeds on your front porch, and this wasn’t looking like one of those “live and learn” situations. So after bursting a few heads, I just sat on my sandbags and watched and waited, thinking it was the end. A sunset would have set the mood rather nicely, but it was still morning.

After Clements had finished off the undead, he introduced himself. He wasn’t too humble about the fact he’d just saved my hide from getting tanned by the digestive juices of a dozen living dead, but I suppose manners had gone the way of the rest of civilization by that point.

He told me his name was Clements, and I told him mine: Thurot. It felt good to say it out loud, like it’d gotten worn out with disuse and now it was new again. Or maybe I’m just making shit up because I’m in a bad mood about the whole dying thing.

Clements was a man with a plan, in three parts: number one, find others to travel with. More traveling partners meant more eyes watching your back, he said, and a good mouthful if the real food ran out. He laughed at that last bit and said it was a joke when I gave him a sideways look, but to this day I’m not so sure. Number two, hit the road, all the way west across the burning countryside; barter with anyone able to talk, and shoot or run over anything that couldn’t or wouldn’t. And number three, reach the legendary safe haven in the west, of which there was no actual tangible evidence or persuasive argument. I was beginning to see why Clements had been a priest.

Back when there had been such thing as beggars, there was a saying about them not being choosers. All the beggars were gone (the poor got ate first), but Clements was the one with the bullets and a working car, and once I told him I had friends in D.C. he offered to take me to them, so I reasoned there wasn’t a point to being the poor chewed-up choosy beggar. I agreed to travel with him as far as the city, and in return I listened to him jaw about Biblical exegeses. A poor trade on my part, but at least the car had working air conditioning.

The drive didn’t go as planned. Turned out Clements was a bit more distraught over the apocalypse not including pale horses and a flying Jesus than he’d let on at first, which made him turn to drink, which made him tipsy, which made him steer us right into an old oak tree alongside the road. With his arm bent at the awkwardest angle I’ve ever seen, he backed right up and got back to the road. Then he started complaining about how he’d contracted dysentery.

It was about then I noticed the bandage on his arm.

I politely requested he pull over to the shoulder so I could get out and run like hell before he turned into an unliving nightmare, but he said he was special and insisted we reach D.C. first. “Then you can run like hell all you want,” he said. We were driving at a respectable clip, and I wasn’t in any mood to add another broken arm surprise to the day, so I just fiddled with the dead radio nobs for a while longer.

Turns out Clements was special. Not exactly the way he’d hoped — he got feverish about five minutes after we reached D.C. — but at least it looked like he was beating the national average for zombie virus resilience. Far as I could tell, maybe he was right. Maybe the zed-bug was beatable after all.

Spoiler Warning: It wasn’t. I’m telling you this because I don’t want to fill you with false hope for the sake of contrived tension. I mean, you know he would turn into a zombie unless you’re a moron, in which case I’m telling you now so you don’t get all nervous and then get real sad when he dies later. Sorry, had to put that out there. Back to my story. 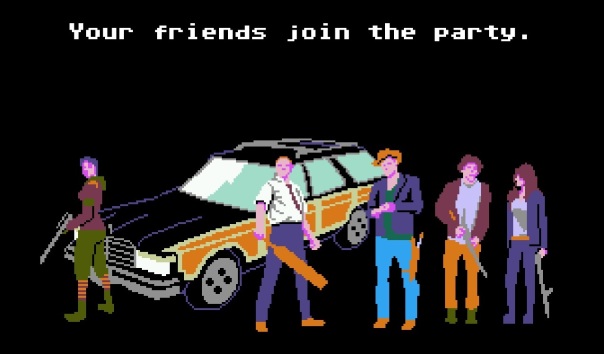 Meeting up with my friends was easy, considering the city was overrun, the survivor haven had collapsed, and there were gangs and the army and the undead all slaughtering each other in the streets. We pretty much drove up and there they were, ready to be saved.

Clements was glad to meet them, probably because he was getting hungry (his earlier comment about cannibalism grew into focus as I realized he was probably an early-stage zombie). I introduced Somerset — “Good for repopulating,” he said, winking and blasting me with whiskey-breath. “That’s my wife,” I shot back. After we stood around for a few minutes contemplating how we’d somehow managed to tap humanity’s final reserve of awkward-juice, I got back to the introductions: Pariah, a friend from the misty UK who had picked a hell of a time to visit; Wedge, who had been a marine and so was invaluable to our enterprise; and “Agent,” he said, cutting me off before I could give his real name. I tried again and he cut me off again. “Agent. Five.”

Clements was still operating under the assumption that we were all going to take a merry jaunt across the nation to that mystical safe haven on the West Coast, and given the state of things in D.C., that was starting to look appealing. Not as an actual plan, mind you — chances being what they were, death was a near certainty. Even so, I wanted to die in a place of my choosing. Approximately, anyway. And I chose not Washington D.C. What a dive. 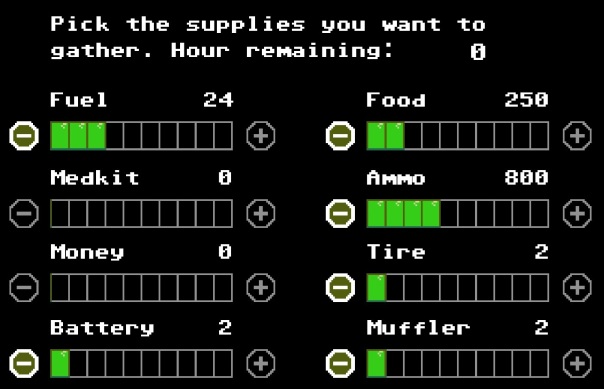 “We go in twelve hours,” Clements said, then he set me to the task of scavenging for supplies while the rest of my friends repaired the station wagon.

There were all sorts of options to consider, and Clements took me aside and talked me through all of them, like I was some sort of dunce. He explained that fuel was good for driving our car, medical kits would help us if we got hurt, money might still hold some value among those living in denial, food was good for eating (he turned and eyed Agent Five for a minute, only returning to the conversation when I snapped my fingers by his ear), ammo was good for shooting, and car parts could help us fix the car.

With the entire city at my disposal, none of these things were particularly difficult to find, it was just a matter of which. I decided on a few gallons of gas, some spare parts, and a couple big bags of food — and lots and lots and lots of bullets. Anything else we could find out on the road, I reasoned — especially with bullets.

When I got back with my haul, Clements was visibly agitated. Also visibly starting to turn green. Not wanting to agitate my friends, I took him aside and asked what the matter was.

“There are only five seat-belts!” he said, shouting and crying at once. I smiled softly and patted him on the shoulder.

With that problem out of the way, I headed back to my friends. I got a few odd looks, a couple lingering glances. But I think we all knew I’d done what was necessary—

Oh, all right, you got me. He didn’t turn into a zombie. Could be he was special, exactly like he thought. Maybe. But what good would that have done? It’s not like they could synthesize a cure from his bone marrow since we didn’t reach the West Coast anyway, so what’s the difference?

Now let me catch my breath and I’ll tell you what happened next. In short: we drove a long ways.

Posted on January 17, 2013, in Game Diary, Indie and tagged Indie, The Men Who Wear Many Hats, The Organ Trail. Bookmark the permalink. 7 Comments.

← The Ladies of Andor
The Organ Trail, Part Two: The Road →