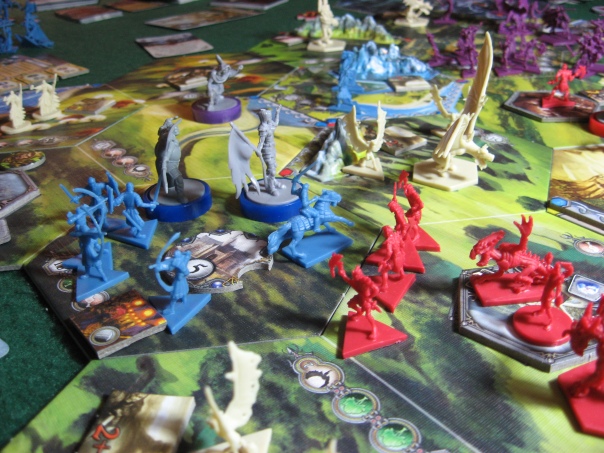 Loyal Space-Biff! readers (both of you!) may have noticed that the number of articles has declined over the last pair of weeks. This is because I’ve been working with some friends on something extra special. Starting on Monday, I’ll be posting a miniseries covering an epic play of one of my favorite boardgames: Runewars. This is an excellent specimen of boardgaming at its best from Fantasy Flight Games and designer Corey Konieczka (whose games I’ve prattled about twice before). We’ll be using both the base game and the expansion, Banners of War (by designer Andrew Meredith). The series will be spread out over eight parts, and will be updated every Monday and Thursday. Should be fun.

That’s the bulk of my announcement. If you want details on the game, they’re posted below. 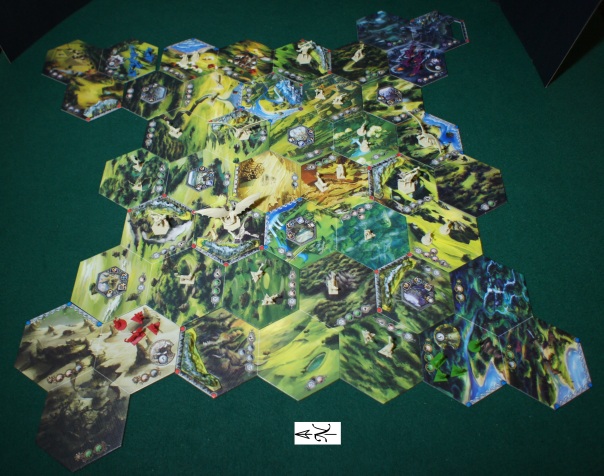 The map of Terrinoth that we will be using. North is to the left. The four factions begin at the four corners.

One of the reasons I’m head-over-heels in love with Runewars is that it takes a gamble and does something completely unexpected. You can see that it’s a huge game. It lets players cobble together one of the most gorgeous boardgame maps imaginable, full of color and boundaries and neutral creatures and cities. It lets you raise distinct armies full of thematic flavor, and—crucially—has you build them according to your vision of what your army should be rather than just advancing along a predetermined track. It sees you taking control of heroes to lead armies or adventure for rare artifacts or hunt down pesky enemy champions. It lets you play at diplomacy, try your hand at intrigue, cast spells, burn cities, find hidden mountain passes, freeze the landscape in the middle of summer, and much, much more.

With so many fine bits in its toolbox, Runewars could have been a game about conquest. It could have easily settled for being a Risk-like game with unique factions on a random hex board. I would have bought that game. But the gamble I mentioned earlier is that Runewars is a bit too smart for that. It isn’t about conquest—or rather, it isn’t about too much conquest. Victory rarely means you broke through enemy lines and captured their capital city, though you can attempt that kind of strategy if it appeals to you. Instead, conquest is a bit more realistic, just one more tool to accomplish your goals. After all, barring a few exceptions, wars aren’t usually fought just for conquest’s sake.

In Runewars, the resource that spurs the collision of its four nations is the reappearance of the dragon runes. I’ll confess I’m a bit fuzzy on the lore of Terrinoth—I know it takes place in the same world as Descent, but beyond that, I’m mostly blank. I suspect the various faction leaders are similarly in the dark about their continent’s history and the importance of these runes. It’s enough to know that once you have enough, you will win.

Ordinarily, the game ends once a faction acquires six runes or the game has gone on for six years, at which point whoever has the most runes will win. There are a few variants to make the game last longer; more runes, more years. In our game, we’ll be playing for either eight years or eight runes, whichever happens first. 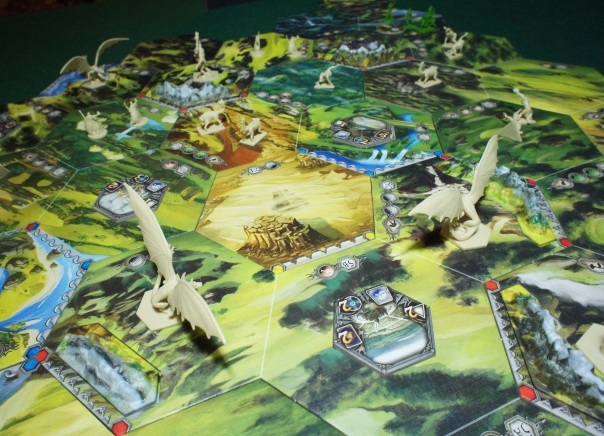 The center of the map, and the site of the capital of the Old Kingdom. Now covered by desert sands.

As I said, I don’t know Terrinoth’s fluff well enough to really have a game set in the actual Runewars world, so the scenario we’ll be playing is a sort of bastard-child of my own imagination and the few snippets of lore I’ve gleaned from rulebooks and internet forums. The premise is that the dragon runes were made by an ancient kingdom to exercise total dominion over Terrinoth. As is wont to happen, the decay came from within and the Old Kingdom fell. Into this vacuum emerged the four factions and the independent cities. Each of the four factions has gone through periods of ascent and descent, and the seven independent cities have long been able to stand against invasion. The central three cities—Vynelvale, Greyhaven, and Dawnsmoor—are especially strong, founded as they were on the periphery of the declining Old Kingdom, and each possessing one of the fabled dragon runes that gave the ancient dragonlords their power.

Other than the lands of the four factions and the immediate surroundings of the seven cities, the countryside is overrun with brigands, monsters, giants, and dragons. Most of these beasts are intelligent enough to have banded into semi-independent states of their own, and they may even take sides in the coming conflict.

Let’s take a brief look at the four factions as I understand them. 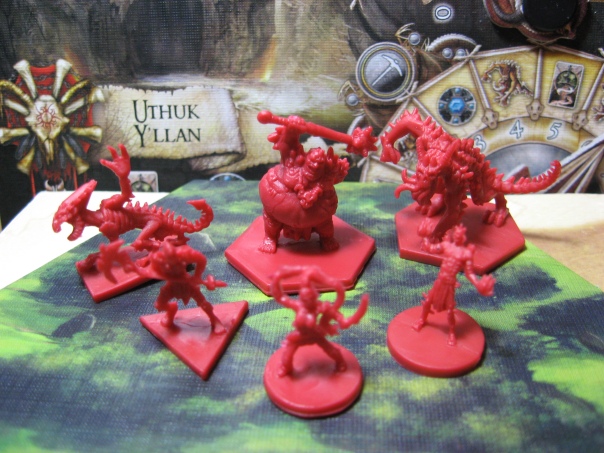 UTHUK Y’LLAN
“Uthuk Y’llan” is the name given to the nomadic tribes that inhabit the harsh northwestern deserts of Terrinoth. These tribes only rarely ally to emerge from their wasteland, but when they do manage to coagulate into a massive warband, it spurs fast action from the Daqan Lords and Latari Elves, not to mention tense defenses and appeasements from the nearby independent city of Forge. This is because the Uthuk Y’llan were once considered the greatest threat to the Old Kingdom. In those ancient times, the men of the Uthuk tribes tamed wild demons, drank their blood, and made blood pacts with some of Terrinoth’s darkest powers. Their invasion of the Old Kingdom was swift and bloody, and was only repulsed by massive alliance led by the powerful wizard Timmorran Lokander and his general Waiqar. Rumors have long ago transformed into supposed prophecies that one day the Uthuk would once again rampage through Terrinoth. 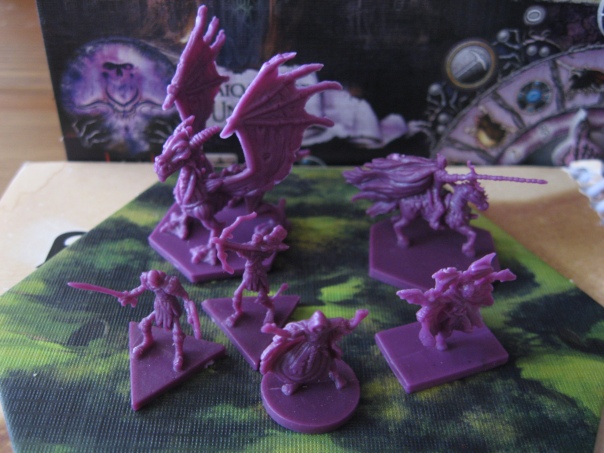 WAIQAR THE UNDYING
Ages ago, Waiqar Sumarion was Timmorran Lokander’s champion and general. On campaign against the Uthuk, he was captured and imprisoned. Although he was eventually rescued, years of torture and proximity to demon-blood had begun a twisted process within him. After a time, Waiqar found himself at odds with his former friend, eventually leading to a clash between the two that resulted in Waiqar making a powerful curse that immediately killed his rebel army, then raised them again as mindless servants. Ever since, Waiqar has patiently watched Terrinoth from his polluted lands far to the southwest, waiting for a time when he could maneuver himself into a position on the restored throne of the Old Kingdom. Though many rightfully regard Waiqar with suspicion, his emissaries have embedded themselves into the politics of Terrinoth, especially in the nearby city of Tamilir. 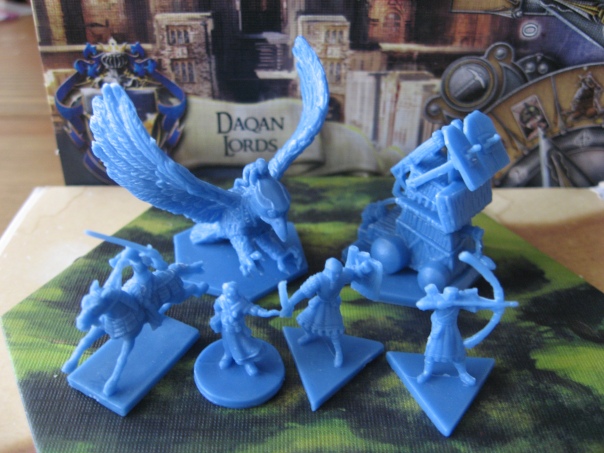 THE DAQAN LORDS
In the fertile northeast reside the Daqan Lords, a loose confederation of human baronies that pledges allegiance to the long-dead King Daqan, who sat briefly on the throne of the Old Kingdom before disappearing along with the capital city. Legends have always maintained that the return of the Lost City and the gathering of the dragon runes would herald the return of the Misplaced King, and though the various lords can be counted on to scheme against one another in peacetime, they have always managed to band into a strong force when their homeland is threatened. They have strong ties to the nearby city of Frostgate, which acts as a trading and information hub between the Daqan and the rest of the independent cities. 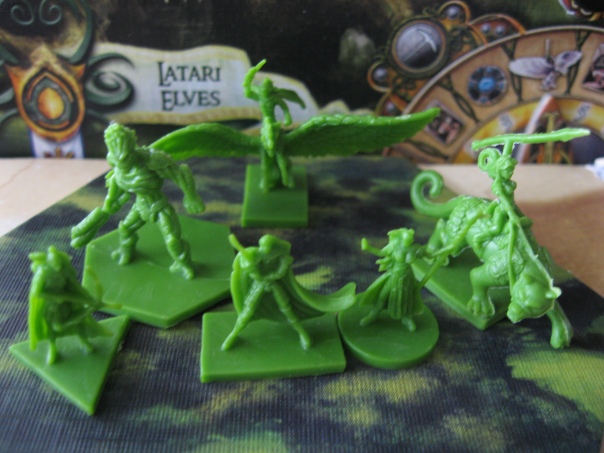 THE LATARI ELVES
The dense forest of Aymhelin in the southwest of Terrinoth protects the Latari, the eldest of all the continent’s races. The elves are old enough to remember the history of the world, and have seen the Lost City pass from one king to another. They witnessed the tyranny of the dragonlords and fought to oppose it, eventually scattering the dragon runes across the land. They bore the brunt of the first Uthuk incursion and stood allied with Timmorran Lokander and Waiqar against the demonic hordes. And they acted as friends and counselors to King Daqan, who despite all his power ended up blinking out of existence. Each time, the Latari have provided their veteran soldiers, their powerful magics, and their patient advice, and still they have yet to occupy the dragon throne. Though the Old Kingdom is long buried, old animosities are still fresh in the minds of those who live for centuries, and should the need for conflict once again arise, the Latari are unlikely to permit themselves to be marginalized again. For now, however, the Latari are content to bide their time trading with Nerekhall and watching the balance of power in Terrinoth carefully.

Well, those are the factions. Soon an ancient secret will be uncovered and these four powers will be thrown into a conflict for supremacy over all of Terrinoth!