← Blood Rage
You Don’t Kill Your Own Units for Magic →

There’s something rejuvenating about getting lost in the woods. Of course, I’m not talking about getting really lost. Lost in the sense that I know the trail is somewhere over that hill, or that if I walk a few miles I’ll descend into the rich folks’ suburbs. Lost with cell coverage.

Nate Hayden’s Rocky Mountain Man is a game about getting lost. Wholly, truly, stuck in place, walking around in circles until the sun goes down lost. Good thing you’re a mountain man.

All but the crayons, cards, reference charts… okay, just some of it.

Here are the things you need to know to become a mountain man.

First, mountain men love making maps. That’s why Rocky Mountain Man is a crayon game, scrawled within a folio that can be preserved between sessions until it’s ready to be wiped clean with a tissue. Mountains, hills, scrub, deserts, rivers — these features not only spring into existence as you trek across the landscape, they’re also essential to your commerce. The more you chart, the more dollars you earn when you return to civilization.

Second, mountain men take everything in stride. Setbacks, injury, the loss of equipment or life. All of it. You’re here because the old world chafed. It wasn’t amenable to your ways, your walks, the pace you preferred. Compared to that, every minute in the wild is a minute extra. You’re here because it’s where you belong. And even the last flickers of thought that run through your mind as you lay dying constitute a memory of that belonging.

Mind you, this isn’t to say you’re going to go easy. Mountain men are also crafty survivors. Trapping, hunting, parlaying with Indian tribes, hiring guides and scouts, bringing plenty of rations and pack horses to haul your things. Oh, and rifles. Bring extra. Anything that helps you scrabble back from the brink.

Fourth, mountain men flip cards. So many cards. Enough cards to last a lifetime and then some.

Lots of these will be flipped.

Some games are about winning. Crud, most games. Nearly every game. Rocky Mountain Man isn’t devoid of a victory state, but it isn’t like that. It’s like taking a walk. A walk that’s liable to kill half your companions, see your horses stolen, and leave you staggering back toward home a little more leathery than when you set out. But a walk all the same.

It works like this. You leave Missouri with a party and some supplies. Once you step past the known boundaries of the white man’s world, nearly everything is unknown. Entering uncharted territory is dangerous for a host of reasons. Maybe you’ll happen upon wolves. Maybe your last guide will get spooked and decide to leave one morning. Maybe your canoe will tip as you pass through white water. Maybe you’ll get scalped. Maybe you’ll meet Spanish dragoons and wind up fleeing to save your hide. Maybe you’ll wander so long that winter comes and blackens your toes.

Everything is a risk. The beauty is that the risks are yours to take. It’s possible to return to Missouri by known paths. To only parley with friendly tribes. To paddle your canoe through calm waters, never through rapids. To avoid traveling too far in a week. To bank on safe rolls and safe draws.

But that isn’t the life you’ve elected to lead. The risks are worth the reward. No, not money, although money keeps you afloat. The reward is what might happen when you press into the horizon. Sometimes you make friends in unlikely places. Or discover things no white man has seen before. These aren’t impossible things. The landscape may be alien, but it’s still terrestrial. Hot springs. Peculiar mountains. Stones that stand in an otherworldly way. Stretches that teem with life despite being barren. Things whose sidelong glances at ordinariness only make them all the more extraordinary.

These mountain men sure seem… flavorful.

Don’t confuse this for an easy life, or an easy game. I mentioned the flipped cards. Every step into the unknown sees you flipping a whole sequence. Terrain, rivers, discoveries, encounters, encounter movement. That’s after rolling to determine whether you’re lost, before rolling to summit a mountain to survey the nearby land, and before again drawing more cards for said surveying. Meanwhile, every step requires careful bookkeeping. A sharp pencil and good eraser are essential.

Nor should it be confused for a conventional play experience. Especially when undertaken with a partner, Rocky Mountain Man runs on a timer. It isn’t uncommon for one party to take multiple turns in succession while the other pauses to treat the consequences of an encounter. This is also the case solitaire, although the timer marks the changing seasons, moving from the abundant hunting of the spring through to bitter winters. In neither case should the result be hurried, apart from those moments when one realizes it’s time to race back to civilization or link up with the mountain man rendezvous. And in those cases, some flexibility is in order, although it’s worth considering the role constraint plays in spinning a yarn.

The yarns are worth it. One expedition saw me crossing a span of territory to reach a distant destination, drawing a stripe of color across the map’s blankness. Another saw me competing with trappers for furs, only for our rivalry to gradually sour into something more malevolent. Once I prepared a cabin, thinking I could take advantage of some lake country to trap beavers, only to watch as one friend after another succumbed to the cold. These were momentary beats, minor among the larger tasks necessary for mapping the Colorado River. But they soon became defining moments of pursuit, escape, survival, and triumph. 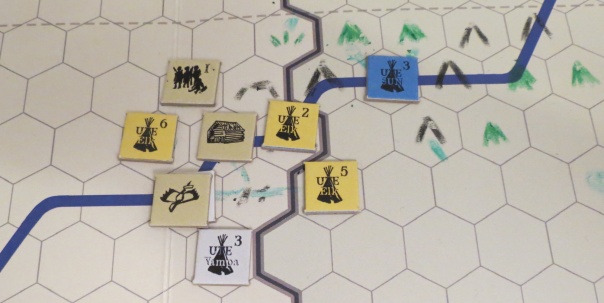 Wintering, pestered by friendly natives as I attempt to trap beaver.

After Hayden’s horror titles, there was no telling which direction Rocky Mountain Man might travel. The result is a thing of meditative beauty. It’s even sensitive to the vanishing nature of that beauty, the development of its land, the removal of its natives — named Indians, the rules note, because of the preference of the tribes depicted within. The worst depredations will come later, but they begin with a map. Like the marks of crayon on its folio, these sights will not last forever. So breathe them in while they remain, and linger, and remember the scent.

Posted on April 14, 2021, in Board Game and tagged Board Games, Emperors of Eternal Evil, Rocky Mountain Man. Bookmark the permalink. 22 Comments.

← Blood Rage
You Don’t Kill Your Own Units for Magic →