Right up front, Cloudspire wasn’t made for me. Even with gobs of ways to play, ranging from a solo mode to cooperative scenarios, plus the regular competitive slugfest that goes all the way up to four factions, I can’t see the appeal. Maybe it’s because I have no history with the MOBA genre. Maybe it’s because I have a thing (a buried, unconscious thing) against poker chips.

Or maybe it’s because I like games that aren’t the board game equivalent of a chocolate syrup truck tipping over in slow motion. You know, a plodding mess.

There is no gamer alive who does not appreciate the clink of heavy chips.

If I had to give the elevator pitch, I’d sum up Cloudspire as fifty percent MOBA — those lane-based strategy games that were all the rage with my teenage cousins before they gave their souls over to Fortnite — and fifty percent production values. In the latter case, Chip Theory is as faultless as ever. The box is big and heavy, laden with neoprene hexes and nuke-proof storage cases and stacks and stacks of plastic chips that practically beg you to splash the pot even though the game features no such behavior. It’s as though somebody had a grudge against the “board” part of board games. If there’s cardboard in this thing, it’s hidden like an egg white at a vegan restaurant.

And as a notion, there’s nothing wrong with either of those halves. The idea is beautifully pure: you have a fortress, your opponent has a fortress. Like most fortress owners, you would prefer to be the only person with a fortress. So you hire bands of warriors who blindly hurl themselves down the paved paths of fantasyland. Since your opponent has the same idea, you can expect a lot of casualties somewhere near the middle. Meanwhile, you’re also building defensive towers, upgrading your fortress with new abilities, and deploying heroes with a game plan beyond “run down this road until you die.”

Pure of heart but clumsy of everything else, just like grandma used to call me. Although there’s a game in here somewhere, Cloudspire seems determined not to let it show. Or maybe it’s that Cloudspire shows too much, terrified that somebody will notice there isn’t much game underneath all the neoprene and plastic.

The overview doesn’t seem so bad. Over the course of four waves, you’re tasked with breaking through enemy defenses and smashing their gate to pieces. To accomplish this, the phases are dutifully arranged: a market for buying mercenaries, followed by everyone building defenses and fortress upgrades, after which armies are amassed, put into formation, and flung in your rival’s direction.

We’ll talk about those armies in a moment. For now, the important thing to note is how much stuff there is to tinker with. Each side has a small handful of towers and approximately a zillion upgrades. Consider the Brawnen, Cloudspire’s most plain-jane faction. Before the action even kicks off, they’ve got loads to consider. Dispatch Platforms are towers that deal splash damage, perfect for taking out conga lines of enemy troops! Drilling Outposts occupy a defensive slot, but if they survive you’ll gain a bunch of source! And that’s before we flip over the chips to reveal another set of towers, both of them even meatier and more tantalizing than the first two. Then there are your tiered fortress upgrades, like the Source Drill for generating extra source, Assemblies and Honor Pits and Strongholds that let you roll dice for extra perks or maybe nothing at all, and other spots that let you build new towers. Make sure you read over these options before you make any decisions. Wouldn’t want you slapping down that Drilling Outpost too soon. Cloudspire has perhaps the highest count of “Oops, I wasn’t allowed to build that yet” statements I’ve seen in years.

But the stuff! The units with their keywords! The upgrades with their italic explanations about how an “artillery die” differs from a “forsaken die”! You could get lost beneath such wave of competing perks and upgrades and unit types. Maybe even to the point of drowning, never to break the surface again. 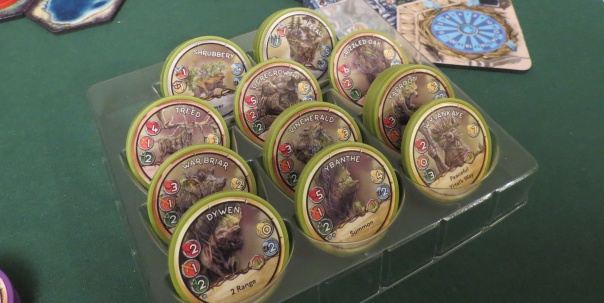 The meatiest decisions are based on force composition.

The best part of Cloudspire is the process of building your army. As soon as you’ve finished poring over all those upgrades, you’re handed some command points and tasked with putting your force in order. Like everything else, there are plenty of options to choose from, all with their own strengths and vulnerabilities. And what strengths they are. There are your usual perks, familiar ideas like ranged units or flying units, but for each of these there’s something crazier. Something like Entropy, which transforms your unit into a walking suicide bomb, or Sourcefield for negating all of a unit’s damage by spending equivalent source, or Assimilate for stealing the source rewards for defeated units within a certain range, no matter who landed the killing blow. The game’s most intriguing units tweak the makeup of your army in distinct and important ways.

Even how you stack them is crucial. Units can either be stacked on their own — with red health chips underneath each one — or clustered together. Flying solo, your units will stretch into a long line as they march down the path, ultimately bringing as many attacks to bear as possible. Grouped, on the other hand, sees each stack’s top unit absorbing all the lumps. When they die, the unit directly beneath them is cycled to the top. It’s a great decision, giving some tactical depth to your mob. Do you want to protect units until they’re within range of something juicy, or have piles of thugs on the field at once? 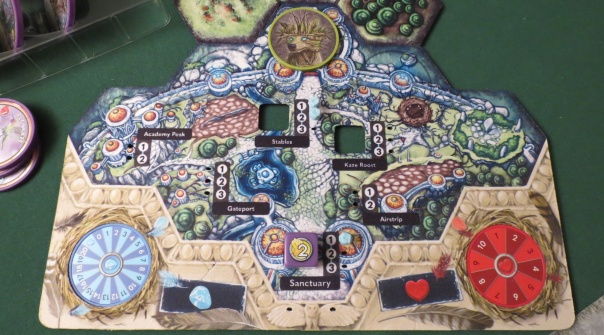 Don’t let your gate get crashed.

There are two major Buts to all of this. Either on its own would present a major problem; together, they’re enough to scuttle everything Clouspire is trying to do.

The first opens with a concession: yes, there are dozens of keywords, and yes, you’ll be constantly flipping over your faction sheet (and probably the market sheet) to match those keywords to their definitions in order to figure out what each unit can do. At its most excessive, you’ll also be demanding to see your opponents’ sheets, because certain abilities are so outlandish you won’t believe Geoff read them properly until you examine the text with your own eyes. Honestly, fair enough. Chip Theory wasn’t about to clutter up all those beautiful chips with 4-point paragraphs explaining each ability.

But they could have actually explained each ability. Cloudspire provides a hundred options, but doesn’t deign to explain them all. The birdfolk Heirs have an entire system built around three keywords, Elfin, Roost, and Roost Roam, which have something to do with kamikaze hummingbirds spawning onto a stack, roosting on certain units, and flitting away to explode stuff. How do these keywords interact? Don’t ask the faction sheet. I’m not even sure it knows. To say you’ll be seeking out an FAQ is an understatement. At times, Cloudspire feels like it’s trying to boost the career of professional FAQ writers.

Marching out to battle. Slowly. And this is the fast team.

The second problem is even more pronounced, and appears the instant those army stacks are put into action during the onslaught phase. Now everyone takes turns moving their heroes out to harass rival columns, snipe kills at the last moment, and uncover random destinations on the board — and slowly, painstakingly, dully shuffle the rest of your units forward a few steps at a time.

To call this process languid would miss the point. It isn’t only boring, although it does lay claim to that title. Far worse, the onslaught — the culmination of all those preparations, those upgrades, every spent pip of source and every assigned command point, all your units arranged and stacked — is ninety percent resolved on autopilot. Units trundle up to each other, trade blows, and die, all while steadfastly sticking to their preordained paths.

Oh, there is that remaining ten percent. Your heroes aren’t entirely useless, and can, in some circumstances, swing a fight into your favor. You’re even permitted two “emergency builds,” letting you relive the thrills of the earlier building phase to slap down a tower or two at the right moment. Everything else is a slow trudge, your minions trapped in a singular orbit and deprived of any will of their own. You’ll make occasional targeting decisions or split the difference if there are two paths equidistant from your destination, but beyond those few glimmers of agency it’s pretty much fire and forget. Units march, trade slaps, and provide source to the enemy when they die. It’s like a straight line of dominoes pushed simultaneously from both ends, but less kinetic.

Balance isn’t an issue I often comment on. Most of the time, such complaints have nothing to do with a game’s tuning and more with somebody losing when they feel like they should have won. That said, the units in Cloudspire certainly don’t feel balanced. It’s common for one force to totally shred another, even stumbling upon the enemy gates with health chips to spare. Your heroes, meanwhile, are generally too fragile to face the hordes head-on, instead spending their time stealing kills or performing support roles. Are certain units good at countering other units? Absolutely. As it should be. But there’s no way to scout out an exploitable weakness when everybody’s armies are arranged simultaneously. In that regard, it’s the MOBA formula inverted: battles fought by mobs while your heroes lurk around the fringes, looking less and less heroic each time they’re relegated to support rather than wading into the fray.

In other words, Cloudspire contains loads of decisions, but few are informed, and fewer still have much of an impact on the battle. What’s the point of so much choosing when most of it hardly matters in the end? When you get right down to it, Cloudspire is like meeting people through the most uptight dating site ever conceived: lots of rules, lots of keywords, lots of beautiful components — and not much to do with them.

Posted on October 30, 2019, in Board Game and tagged Board Games, Chip Theory Games, Cloudspire, The Fruits of Kickstarter. Bookmark the permalink. 38 Comments.