I’ll bet you a silver dollar that I can review Werewords in a single sentence. A sentence that, upon being read, will inform you with total accuracy whether Werewords is just one more social deduction gimmick or the long-awaited incarnation of the One True Deductor.

The customary accoutrements of Werewolf.

For the record, everything after this point is mere icing. The review itself is finished.

The interesting thing about Werewords is that it takes an activity that people only play when knockout bored — driving across the American Midwest, say — and furthermore an activity that somehow makes its players more bored, so that its conclusion is a moment of pure relief akin to the cool release of death after a lifetime of torment, and transforms it into the sort of thing you could play for hours. The sort of thing you might elect to play for hours.

How does it do it? I think there are a few reasons. The time limit, for one. Unlike both Werewolf — any number of variants — and Twenty Questions, there’s no downtime. Everyone gets a role; the mayor picks a word; everyone starts bellowing questions; the mayor, mute because of something something magic, responds with tokens denoting yes and no and little else. 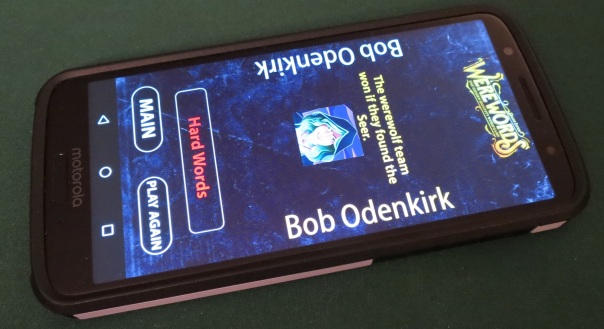 Your primary component — and in the game.

There’s more to it, of course. There’s a seer who knows the word, but wants to avoid letting the resident werewolf know who she is, lest he gobble her up before the villagers can put those ten-for-a-farthing torches and pitchforks to good use. There are other roles, too, though they’re only necessary in larger groups. In fact, another of the things that makes Werewords such a delight is that there aren’t a zillion roles to memorize. That usual chicanery, where the table is a tangled logic puzzle? Nowhere to be seen. It’s all about asking questions and watching people ask questions. Deduction of two stripes in the same moment: working through the word’s identity, and working through your fellows’ identities.

And it works like a charm. Once, the word was Legolas. That round, I was like a bloodhound on the trail to Isengard. “Person?” I asked. Yep, the mayor’s token answered. “Living?” Nope. “Fictional?” Yep. “Book?” Yep. “Fantasy?” Yep. “Tolkien?” SO CLOSE, the mayor said wordlessly, using one of his special tokens. “Gimli?” Nope. “Aragorn?” Nope. “Elf?” Yep. “Legolas.”

The werewolf was outed by the magic word. Naturally, he believed I was an overzealous seer. Nope. Just a very humble genius. Now I wear his pelt as a reminder that sometimes Tolkien isn’t the nerd version of Godwin’s Law.

More importantly, that match was memorable in the peculiar way that many of Werewords’ matches are memorable. Because it’s about words and questions alongside the usual deduction, every so often a tidbit of pop culture, or an actor, or some weird reference will land in exactly the right way. And because it wraps up within five short minutes, there isn’t time to get bored, or realize you’ve lost track of who’s who, or watch in wonderment as this group you’re hanging out with takes social deduction way too seriously. Everything’s been stripped out but the trill of questions, answers, and the occasional side-eye.

Yeses and Nos and Maybes.

Everyone thinks they can design a social deduction game, but only a few manage to pull off that magical combination of logic and whimsy, speed and panic, truth and deception that craft a classic. Even veteran designers are liable to fail.

Werewords, on the other hand? It’s one of those so-dumb-it’s-amazing-nobody-did-it-earlier games. Twenty Questions, on a timer, with somebody murdering somebody else if the word isn’t guessed. Or possibly still murdering even when it’s guessed. Or getting murdered back before they can — eh, you get the idea. Somebody’s gonna die.

And it’s a good one. Seriously, contemplate that. One of the dullest driving games has metamorphosed into one of the better social deduction games.

(If what I’m doing at Space-Biff! is valuable to you in some way, please consider dropping by my Patreon campaign. Every little bit helps. I regularly play both Twenty Questions and I Spy in the car with my daughter, and your support is the final thread of sanity that prevents me from toppling into the abyss where minds are lost to maddening repetition.)

A complementary copy was provided.

Posted on October 22, 2018, in Board Game and tagged Bézier Games, The Fruits of Kickstarter, Werewords. Bookmark the permalink. 5 Comments.