← Another Land War in Asia
Hopeless →

There aren’t many games that wouldn’t be improved by the presence of clickety-clackety, oh-so-tactile, heavy-as-depleted-uranium poker chips.

Then there are games that already have poker chips and pretty much feel like they’re bribing you into liking them more.

Try to guess which type of game War Chest is. 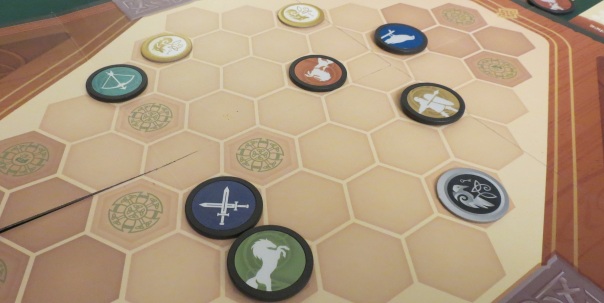 If War Chest were played with cards rather than chips, we’d call it a hybrid. That is to say, your chips have a life cycle, and do more than just move in and out of your draw bag. From the sidelines to the bag to the battlefield to the graveyard. The twenty-minute cicada.

At every step, there’s that clacking. War Chest knows how to make a move feel perfect. Even when it’s a bad move. Even when it’s a pointless move. The heft of the chips, the way they fall against their fellows when thrust into or mixed within the bag, that minor slap as they hit the table — it’s the same reason that a game like Splendor can sucker us into accumulating gems for hours on end, and War Chest provides even more reason to handle its chips. Everything you do, from recruiting troops to deploying troops to killing troops, is a delight on the pads of your fingers.

Each match features its own unique army.

Here’s the idea. Both sides are fielding an army of their own composition. There are some presets based on famous battles, but the real deal is found in pre-game drafting. That’s how you wind up with an army of glass cannon ranged units versus stout knights and pikemen, or synergistic ensigns and marshals versus hordes of footmen and scouts. Each of the game’s sixteen units does its own thing, and when every army features four such mismatched units struggling to hammer out a workable strategy, War Chest begins to look very interesting indeed.

From there, you toss a few units into your bag (clackity-clack), draw your first trio (feel the heft), and you’re off. Chips can be spent in a few ways. The exciting option is to put them on the board, either adding a new unit to one of the hexes under your control or atop one of your units, effectively giving it an additional hit point. The first trick is that you can only field one of each unit at a time. It isn’t enough to play your powerful units; even the lightweights must be given their due if you want anything resembling board control.

The second and third tricks aren’t quite as flashy, but they’re every bit as essential to your army’s success. Rather than plopping everything onto the board, you can also play chips to the sidelines to perform essential administrative tasks. Face-down chips will let you steal the initiative for the next round or add new chips to your bag, while face-up chips will maneuver their corresponding unit on the table.

Say what you will, but the production values are wild.

It’s the classic tension between doing something now (deploying, attacking) or later (recruiting, stealing initiative). And for the first few turns, the effect is appropriately straining. Units march from your starting hexes, edging across the board and claiming new locations. The first few tentative strikes and unit abilities come into play, moves and countermoves, performed with… well, not chess-like precision, since units in War Chest tend to be sluggish, only moving or attacking one space at a time. But a form of precision that’s more trundling.

Better yet, it’s a form of precision that lies largely within your command, despite being driven by chips drawn at random from a bag. Want to activate a unit more often? Recruit its duplicates to effectively gain a sequence of activations. There’s nothing preventing a single unit from rampaging through enemy lines. Certain units are even built for it. The Berserker can spend bolstered chips to stack attacks into a ballet of death. The armored knight, invincible unless attacked by a bolstered unit, can threaten entire sectors and force opponents to spend additional chips. And Cavalry can move and attack in a single activation, perfect for a bag packed with duplicate pieces.

It isn’t long, however, before War Chest tips its hand. All that tactility, those sixteen unit abilities — they’re icing atop a brick of concrete.

The problem is twofold. First, most units operate in the same manner, either moving one space or attacking an adjacent space. But this doesn’t lend itself to clever maneuvers. Unless you’re holding a great draw, any adjacency to an enemy is an immediate threat. You’ll move a unit next to an enemy, at which point it all comes down to who’s holding the proper chips, or possibly who’ll draw the proper chips come next round. It’s possible to work a bit of mental arithmetic — “There are four Warrior Priest chips: one on the table, one not yet recruited, and she’s played one, so the odds of her holding the fourth chip are low.” — but the act of spending your own chip provides the same information to your opponent. Rather than thinking about your units’ moves, nearly everything in War Chest comes down to the quantities of what you’ve purchased and what you’ve spent. 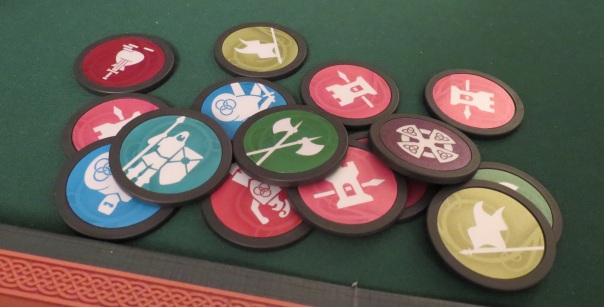 At the end of every battle, there’s a rainbow.

Even worse is the problem of what to do with your chips once your army begins sustaining losses. Since it takes duplicate chips to activate a unit, casualties on one side tend to scratch the game state into warbling auto-tune. With fewer chips clanking around her bag, the weakened player earns more reliable moves, and can leverage her newfound certainty into enforced battlefield equilibrium. In one match, my healthy army was dismantled by two units whose owner repeatedly drew their duplicates every turn. Within a few rounds my position of board dominance had been dragged back to an awkward circular shuffle. And this wasn’t thanks to clever moves, but because those particular chips were all that remained in my opponent’s possession.

Meanwhile, heaven forbid you discover a fielded unit without owning a spare chip to order them around, but the alternative isn’t much better — a worthless chip floating uselessly between your bag and hand. The logical result is that you’ll eventually field a soldier who will never move, battle, or scratch his buttocks. A warrior with both the placidity and bloodlust of a tree.

Can you win before that? I’ve never seen it happen. Ostensibly the goal of War Chest is to command seven of the board’s special marked hexes [edit: six in the two-player game, eight in the team game]. In practice, both sides grind at each other until only one player has a surviving unit or two and the extra chips to command them. Far better to gracefully accept surrender than to continue drawing chips (clackity-clack) until actual victory is cemented.

The Berserker is the best unit, period.

Sadly, the delightful tactility of War Chest and the promise of sixteen unique units combining into ramshackle armies can’t ameliorate its grinding attrition. In place of the staples of abstract dueling games, such as incisive maneuvers, bold sacrifices, and unexpected reversals, its fights are settled by the law of tit for tat and the luck of the draw. Not even the clackity-clack of plastic can save it.

(If what I’m doing at Space-Biff! is valuable to you in some way, please consider dropping by my Patreon campaign. If you ask nicely and pay the shipping, I’ll even send you my copy of War Chest. What a deal.)

Posted on August 27, 2018, in Board Game and tagged Alderac Entertainment Group, Board Games, War Chest. Bookmark the permalink. 19 Comments.

← Another Land War in Asia
Hopeless →