One of the things I’ve always loved most about board games is their ability, with proper consideration and rules, to transpose difficult concepts into the simplified languages of play. To distill, to crystallize, to render out the most crucial pieces of information, conflicts, and interactions for our consideration, and to do so while we’re goofing around. We’re spoiled, basically, to be alive and playing in an era when games are so readily handling tricky issues and ideas and not sucking at the same time.

What follows are my favorite “lesson” games of the year. This doesn’t always mean that the lessons were particularly deep or insightful, but rather that these are the titles that pay their subject matter that extra level of consideration and are all the better for it.

A cheerful small town that has yet to be properly exploited by food chains.

I didn’t love Food Chain Magnate, though not because it wasn’t a good game. I didn’t love it because it was an excellent game, at least when it came to shoehorning me into its intended cookie-cutter worldview. Its vision of the world was one where demand existed solely because advertisers willed it, where supply was all about reselling the same crap but with a “deluxe” bit of wrapping paper, and where success followed an often-narrow path from point A to point $. As a game, I found it frustrating. As a piece of not-so-subtle satire on our appetites for junk and the people who manage them, it was sublime. Review.

Nowadays it’s easy to criticize Thomas Edison as the guy who was mean to Nikola Tesla. But Tesla vs. Edison, which also featured dozens of other luminaries, inventors, business moguls, and patent-stealers and -makers alike, wasn’t interested in such a simple analysis. Instead, it wanted to peel back the mythology of warring inventors to highlight the flawed men (and, in the expansion, the flawed women) who steered the world into the light. By stealing patents, yes, but also by grit, determination, business savvy, and a real desire to preside over a technological revolution. It was appropriate, for one thing, that the game was less about who controlled which space on its map, and more about compiling stock portfolios, rushing to the patent office, and securing enough funding to do it all over again. For best results, play it with the expansion. Review, and review.

Queue: a game about waiting.

Queue might be five years old, but in light of this year’s banning by Russian authorities it has never been more important. Given control over a regular family in 1980s Poland, your goal couldn’t be more relatable. Perhaps it’s even as simple as furnishing a house or providing enough supplies for one of your children to attend a summer camp. The problem is that the Soviet government, displeased with the labor strikes put on by your countrymen, has decided to tighten your belts for you. Thus begin the long hunger years, when stamp books had stamp books, when the black market was the only way to survive, when families stood in lines for everything from groceries to electronics for days on end. But beyond this dismal setup is the cheery fact that not only does Queue capture the evils of casual bureaucratic disregard, it also manages to be a pretty dang fun game at the same time. Review.

So, it turns out that killing Hitler was sort of hard. And if you think about it, nobody actually managed it. That’s what Black Orchestra is all about, the despair of watching your nation hurtle blindly towards certain ruin, but the inability to do all that much about it. Oh, sure, there’s a way to kill Hitler in Black Orchestra. Lots of them. This would be a dull game if it weren’t possible. But between managing your characters’ uncertainties and fears, sidestepping the attention of the Gestapo, and assembling a working plot against the Führer, your prospects of success have never seemed slimmer. Anything less would have made light of the impossible task faced by the conspirators of the Schwarze Kapelle. Review.

This is one Bermuda Triangle you might have no choice but to get lost in.

As this is the sugar-rush version of Twilight Struggle, it very nearly featured in yesterday’s list of the best iterative designs of the year. But it does such a perfect job of capturing its subject matter that I couldn’t help but slide it over here instead. See, one of my favorite gaming experiences of the year was sitting down for a couple plays of 13 Days with my Dad, a session that ended in nuclear annihilation thanks to our unchecked brinkmanship, then continued with some reminiscences about how that feeling of inevitability, that the world would actually end, was roiling in the pits of so many stomachs over the course of those two weeks in 1962. 13 Days never captures that street-level intimacy, nor does it try. But it certainly puts you into the boots of two great superpowers staring at each other across half the world, neither one able to back down, neither certain that the next morning would arrive at all. Review. 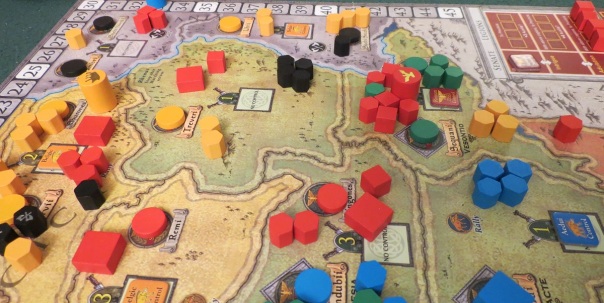 Again, I’m cheating, as the entire COIN Series is one long exercise in the benefits of iterative design. The thing is, Falling Sky also quickly became my favorite of the series for the way it cracked open a dusty chapter of one of the greatest and most infamous figures in human history. Long before he became a novelty knife block, Julius Caesar was making his bones in Gaul, and the lessons in warfare and diplomacy that he mastered there would shape the course of the Roman Republic. The result is an epic tale of tribes pitted against one another, of legions ambushed on long dark roads, of generals clashing in battle, and of the will of a singular man irreversibly charting the history of far more than a single nation. Review.

Taking advantage of an open port.

Cole Wehrle’s previous game, Pax Pamir, bears the enviable distinction of being my pick for the best game of 2015. An Infamous Traffic is a smirk compared to that one, though it’s a self-aware sort of smirk, the kind that says, “I know more than you, and it isn’t good.” Here, you play as a merchant firm over the course of multiple decades, peddling opium to an unwilling Qing Dynasty, fighting one-sided wars when they try to crack down on your product, then going home and utterly failing at breaking into the upper crust of London society. All at once, it’s an unflinching simulation of the crueler side of business, a long stare at the dehumanizing effects of particular methods and products, and a bit of a chuckle at the impossibility of changing one’s class in the middle of the 19th century, no matter how rich or bold you became along the way. The result is tough to wrangle, a bit over-complicated, and oh so very mean — but also utterly engrossing. With the right group, which means people who won’t flip the table when you crush their livelihood with a single well-timed move, there’s nothing in the world like it. Review.

Love him or hate him, Phil Eklund is willing to make bold claims and even bolder games. Or maybe it’s the other way around? Never mind; Pax Renaissance’s central conceit — that it was the bankers of the era who determined the future of everything by who they chose to fund — might not quite hold up to scrutiny, but that hardly matters. Its real triumph is that this is a game that gets it, right down in its bones, that sometimes nation matters, sometimes religion matters, and sometimes class matters — but rarely in simple ways. In some cases it isn’t even possible to decide whether a particular war or movement was about one or the other. As such, its vision is nearly as convoluted as the historical Renaissance, full of religious wars, peasant rebellions, changing vassalages, new republics, art, science, law, papal elephants, and all the rest of it. Watching its conflicts unfold as a series of unrelated clashes, only for events to coalesce as one center of power or another becomes ascendant, and then for your rival to somehow snatch it away from under you by sucking up to Martin Luther… well, that’s just how it goes. Best of all, Pax Renaissance is as thrilling as it is audacious, running fast and hard from start to finish. Review.

Dear Readers, what lessons did you learn this year? There were plenty of games I never managed to play, and I’d love to hear your input. As for tomorrow, we’ll have the final great eight, the most unique titles of 2016.

Posted on December 29, 2016, in Board Game and tagged Best Week!, Board Games, Space-Biff!. Bookmark the permalink. 8 Comments.