The Glorious Blandness of Runebound

Much as I love Fantasy Flight’s line of rune games, the Rune Ages and Runewars and Descents of the world, there’s something faintly desperate about the Terrinoth setting itself, as though it’s terrified of standing out from the crowd. “You want undead? Sure, we got undead. Demons? Yeah, there are demons everywhere. Mechanical men? Of course, we’ve got mechanical men coming out our ears. Pixies? Um, absolutely, we can cram some pixies in there.” In envisioning a world where any manner of creature might appear, there’s hardly any reason to be surprised when it does.

And yet, Runebound, which is on its third edition, is one of the better adventure games out there. The very fact that it’s survived to see three editions is already proof of that. 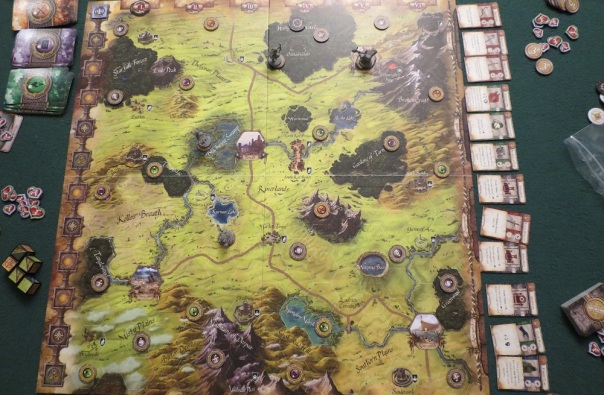 Welcome to Terrinoth, very much like every other fantasy kingdom! Even more so!

Here’s the skinny. Stop me if you’ve heard this one before. There’s this verdant kingdom — rolling hills, burbling streams, bustling market towns, all the things a kingdom requires to earn its “verdant” badge — but in the deep dark woods and mountains and marshes an evil is growing. It might be an ancient dragon, awakening after centuries of slumber. It might be a corpse king, cemeteries emptying of their now-resentful dead. Whatever the problem, a band of heroes, all of whom would readily deploy the term “pluck” on their résumé, have set out to right the wrongs of [insert problem].

Even so, the most immediate problem with making fun of Runebound’s bland-as-unseasoned-instant-noodles setting is that it isn’t actually all that bad. It might resemble every previous fantasy kingdom tossed into a blender and set to frappe, but what it lacks in inspiration it makes up for in shorthand. Setting out that map, with its varied terrain and major cities, its danger areas off at the edges, its chipper color-coded adventures, is not unlike unfolding a map of your favorite amusement park. It’s familiar, comforting, and doesn’t require even a minute’s worth of explanation. For anyone who’s suffered through the rules overhead of the excellent Mage Knight, the fact that you can lay out Runebound’s map, shuffle out some market cards, explain everything, and begin playing in five minutes is a boon. That the ensuing adventure is actually reasonably, well, adventurous is even better.

On the surface, a turn doesn’t seem like much. Maybe you’re in town, so you rest up, shedding your wounds, then stop by the market to look at its selection of upgraded gear. Maybe you’re on your way somewhere, so you roll the travel dice and see how far you can go, potentially (but not too often) getting delayed en route. Perhaps it’s time for an adventure, so you stop at one of the map’s many color-coded gems, flip over a card, and see what happens to you. Sometimes you’ll need to test one of your skills, or battle a monster, or head to another part of the map. You know. Adventure stuff.

What brings it all together is the fact that all the little details that initially seem simple would be better called practiced. Take resting, for example. After being beaten up, you’ll probably want to heal before landing yourself in another scrape. Resting in a civilized spot means you just remove your wounds, easy as that. But what if you’re out in the countryside, far from shelter? Well, you can still rest, but it’s a dicey proposition — pun! — requiring you to roll your travel dice and see how many results match wherever you’re standing. This means resting is easier down on the plains, where your character might see enemies coming, than on guard in the forest or hills. Clever.

Other details are handled with similar expertise. Need new gear? Well, you can see most of what’s on offer in the major curio shops across the land, but stopping by a shop in person means you’ll get to see something at random from the deck, so it’s possible your character will stumble across the perfect trinket by chance. Want to learn a new skill? Easy enough once you’ve accumulated some finished quests, though you’ll also have to hang onto the right skill cards since they also double as your stamina and act as free retries. Quests themselves are generally brisk and very rarely without reward, especially when they send you off to some far-flung corner of the map, and while it’s nearly impossible to avoid violence, the fact that a weaker character can buff up by sticking to social quests or running goods for profit means that nobody is ever left without anything to do. There’s almost always something of interest just a few steps away.

Even the combat is refreshing. Rather than resorting to the usual handfuls of dice, each character starts with their own selection of coins — or, hey, let’s call them what they are: pogs. In battle, you pick them up and flip them onto the table, then swap off with your opponent (the monster’s role fulfilled by your buddies) as you spend them for attacks, blocks, magic, and abilities. Picking up new equipment means adding new pogs to your hand, conveying a real sense of growth as your character earns beefed-up pogs to spend in battle.

The downside is that it takes a little while for your usual combat encounter to wrap up, which highlights the main problem with Runebound: that it gets longer and longer as more players are added. It’s the sort of game best played with those who are fine sitting around and chatting, or heckling a buddy’s flubbed adventure — and heckle you will, since this isn’t a cooperative game by any stretch. While your characters don’t directly quarrel, the entire thing is pitched as a race to defeat the evil baddie. Rush in to beat the dragon lord (or whoever) too soon, and you’ll find yourself ill-prepared; wait too long and one of your buddies might beat you too it. Crud, it’s even possible to wait too long and watch as the bad guy conquers the entire kingdom. That’s what we call the bad ending.

In Terrinoth, people just don’t go out all that often.

All in all, I’m impressed with the third edition of Runebound. Its setting might be defiantly generic, but that lends it an aura of comforting familiarity and means it can appeal to pretty much anybody without any lengthy explanations. It might be damaged by the crippling downtime between turns, meaning it’s best reserved for a small group or for a reunion of old buddies. And it might be simple, but — well, that isn’t much of a downside, is it? In short, this is what is meant by a “beer ‘n’ pretzels” game: simple, sweet, and good for conversing over.

Posted on June 28, 2016, in Board Game and tagged Board Games, Fantasy Flight Games, Runebound. Bookmark the permalink. 2 Comments.