All too often, worker placement games cast their players as glorified clerks, a few tall steps removed from the action. Take Lords of Waterdeep, for instance. Despite being a reasonably solid game, its main attraction — that static resources were replaced with heroes and scoring was accomplished by completing quests — was something of a ruse. A purple cube might have represented a wizard, but it never behaved like anything more lifelike than a block of wood splashed with indigo dye. A quest might have claimed you were undertaking a dangerous venture, but as long as you showed up with the right team, success was guaranteed.

There are plenty of recent worker placement games that sidestep this problem. And now Champions of Midgard can be considered one of them. 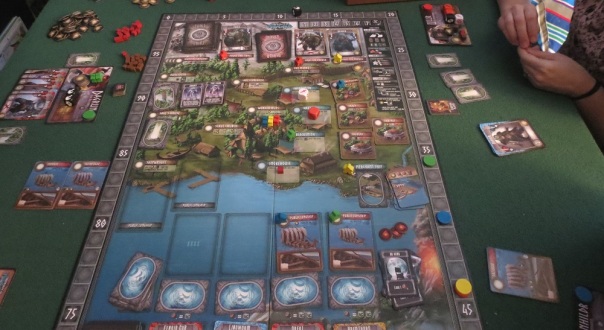 Right out of the gate, Champions of Midgard opens with a whiz-bang elevator pitch. You and some friends are the feuding chiefs of a Viking village that has fallen under siege from every direction. Trolls wander down from the hills, the dead rise from their barrows, and across the slender sea, monsters of all sorts have appeared to chow down on some horned helms and splintered shields. It’s a dangerous time, and only the chief who wreaths himself in the most glory will become the new jarl.

Crucially, you’re presented with a perilous situation, and rather than having you gather resources to accomplish sure-thing quests, the prospect of facing the monsters surrounding your village is portrayed as equally perilous. It’s a dramatic tonal shift, accomplished by the simple act of adding the uncertainty of rolled dice. The very thing that certain modern games have gone to great lengths to strip out in favor of deterministic strategy, and Champions of Midgard slots it effortlessly back into the machine.

The fundamentals of the game’s worker placement are basic enough that I won’t bother expounding on them too much. There are locations for recruiting more of these dice to your warband, markets for gaining or trading food, coins, or wood, the obligatory spot for stealing the first player marker, and so forth. This is the portion that feels least inspired, with bland meeples doing bland things to bland effect.

And then there’s war.

A respectable host of warriors.

Conflict between your accumulated dice-warriors and the monsters that threaten your village is the surging heart of Champions of Midgard, a fitting culmination to all those preparations. Nicely, there are multiple ways to use your fighters, and the chiefs who opt to take risks, splitting their forces, are the ones most likely to prove the most impressive once the threat is put to rest.

Let’s start with the draugr since they’re more known for being numerous than particularly cunning foes. These guys are pretty much always around, providing a good way to pick up some glory without risking many warriors. Combat is as basic as it gets: you assign some warriors, roll them for swords, spears, or axes to deal damage — with some monsters being immune to particular types of attacks — and then kill off your own dice according to the monster’s attack, which you can block with rolled shields. In most cases, battles are brief, possibly only a single round. Rerolls are plentiful, though hanging onto the Favor tokens that enable them will give you points at the end of the game, so there are always ways to manage the danger posed to your warriors.

The other monsters are a bit more involved. Trolls are apparently a Viking’s most feared opponent, because every chief not involved in bringing one down receives “blame,” multiples of which eventually accumulate into a hefty penalty. Meanwhile, the monsters across the sea might tantalize you with their impressive rewards, but they’re also the toughest to defeat and require a well-stocked boat to brave the hazardous sea voyage that might kill off a warrior or two before they even arrive at the fight. Sending off a boat laden with your best warriors only to get becalmed, eat too much food waiting for the wind to pick up, then have some of your fighters starve to death — well, it’s pretty much hilarious, if you’re in a grim “die a good Viking death” sort of mood.

Unsurprisingly, the most interesting locations in town are those that directly forward your efforts at combat. The Stave Church turns your donations into Favor tokens, whether for points or rerolls in battle. The Sage’s House not only gives you an additional secret end-game objective, but also lets you peek at one of the face-down journey cards to better prepare for a voyage. And if you’re sick of borrowing from the town’s limited fleet, you can construct personal longships to ensure a space on the next raid.

The most valuable monsters are also the toughest to reach and defeat.

The consequence of all this dice rolling is largely what you’d expect, injecting a high dose of tension into the dry worker placement genre. By splitting your forces between two or three monsters, you stand to glut yourself on points, gold, and more, but you also stand to lose big if a measly pair of warriors isn’t enough to take care of each threat. It’s within this agonizing decision space that Champions of Midgard thrives.

There’s a lot to like here, and it’s no surprise that Champions of Midgard has been well-considered already. I’m not entirely in love with the final result, probably because the basic worker placement never feels quite as exciting as some of the genre’s best representatives, but the addition of randomization — and in particular the arduous sea crossings — make for something significantly more exciting than the usual fare. If worker placement, monster slaying, and the tension of never knowing how any given fight will turn out sound appealing, then this just might be your champion.

Posted on December 26, 2015, in Board Game and tagged Board Games, Champions of Midgard, Grey Fox Games. Bookmark the permalink. 4 Comments.