In the second quarter of the 19th century, the crown jewel of the British Empire was unexpectedly placed under threat when the Russian Empire began a period of aggressive expansion into Central Asia. India had been the linchpin of the British Empire’s interests abroad for nearly a hundred and fifty years, so the prospect of a Russian frontier bypassing the khanates and the Afghan emirate that had previously stood as a buffer zone between the British Raj and the Russian Empire sparked a flurry of activity. Spies, armies, diplomats, and traders poured into the region. Just like that, the tribal leaders of Afghanistan found themselves squeezed between two desperate empires.

Welcome to what came to be known as The Great Game. 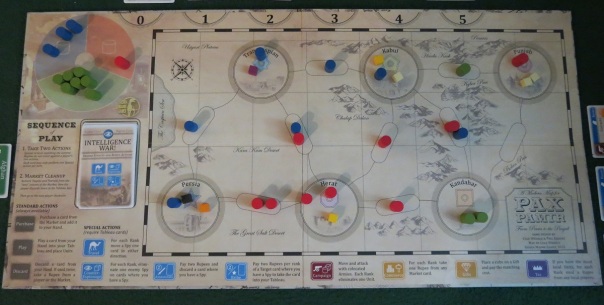 Co-authored by Phil Eklund and Cole Wehrle, Pax Pamir is a riff on one of Eklund’s previous games, Pax Porfiriana. Like its predecessor, it’s a glimpse into a period of turmoil. Everyone controls an Afghan tribal leader tasked with ingratiating themselves with one of the region’s three competing powers (Britain, Russia, or the native Afghan emirate), ensuring they are the most favored of that empire’s subjects when they are finally propelled to supremacy. It’s a many-step process from downtrodden tribesman to a seat on the throne — whether puppet or not, a throne is a throne — and the road is long and winding, so let’s get a few things out of the way first:

Pax Pamir is complicated — though I prefer to call it intricate.

Pax Pamir can be slow — though I’d rather use the term deliberate.

Pax Pamir encourages you to be very mean to your friends — though hey, isn’t that great?

If any of those things make your stomach churn, then this isn’t the game for you. It just isn’t. And that’s okay, not every game will appeal to every person. On the other hand, if those sound entirely surmountable, then let’s talk, because Pax Pamir is a thing of beauty.

The tableaux are more active than the ones in Pax Porfiriana.

Let me tell you a story.

Things weren’t going great for my little tribe. I’d started out loyal to the Russians, but so too had a pair of other tribes, which made for a very crowded time at court. We were exerting our energies swinging at shadows. One of my “friends” would send a spy my way, concealing himself among the ranks of the Cossacks who fought for me, and I would have him shot. One of my own agents would wander over to another tribe’s arsenic mine, and soon they were found having consumed a few too many pinches of the stuff. Assassination and bribery was common, the only way we could compete while remaining technically allied under the protection of the Russian bear.

Sick of playing nice and getting nowhere, I switched sides. For the time being, I would serve my own interests, perhaps even securing a homeland of my own. So I made friends with Abbas Mirza, the crown prince of Persia, joining in his allegiance to the native peoples of the Pamir Mountains. Naturally, the Cossacks refused to fight alongside anyone other than the Russians, so they deserted me. I also lost any favor I may have gained by sending gifts to Count Nesselrode, but little good the investment had done. Instead, I fought long and hard for the cause of my people, marching armies and exterminating any tribes, toll roads, or armies loyal to the British or Russians. On one occasion, a small army of Afghan fighting men was in danger of facing a superior force of British regulars in Kandahar, but I positioned a spy who allowed my warriors to sneak past the British positions, burning the camps of their loyal tribesmen and removing their toll roads without losing a single man. How we laughed as our enemies burned!

Not everything was perfect, however. One other leader was loyal to the Afghan people. She had been fighting to oust the foreigners since before I had joined, and had spies everywhere, firm control of the Afghan roads and armies, and patriots like Prince Akbar Khan and Aminullah Khan Logari on her side. The British attempted an unsuccessful bid to control the region, and once they and the Russians had withdrawn the majority of their forces from exhaustion, my nemesis was stronger than ever.

Back to the tournament of shadows I went. I positioned spies of my own, mercilessly taxed her for the use of our roads and markets, and sent gifts to those in power. Every step of the way, she outpaced me. After a time, she even bribed faithless Abbas Mirza over to her side.

It wasn’t much longer until she launched a coup of her own. We had entered a time of economic prosperity, which meant that if one empire held more roads than the other two combined, they would prove supreme — a goal I had helped accomplish with my sly maneuvers against the British. The foreigners withdrew in disgrace, and my nemesis planted her pudgy buttocks atop the Afghan throne.

So goes the tale of how I came to scrub the latrines of the royal palace. 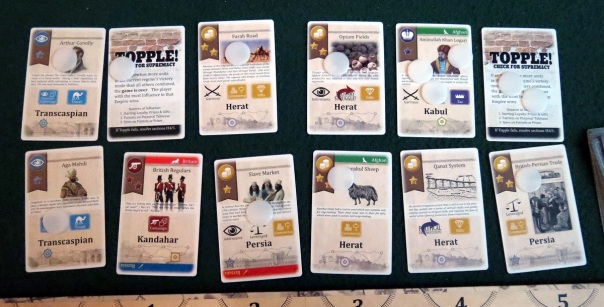 A nice day to visit the market.

One of the best things about Pax Pamir is that while there’s some slight embellishment to the story above, it isn’t nearly as much as you might think. Spies move between player tableaux, bribing and assassinating and gaining imperial favor with whomever they’re reporting to. Roads permit taxation and movement. Armies garrison and march and burn. Local tribes extort payment before anyone is allowed to move in. And each thread is interwoven with every other, forming an intricate rug where the tiniest alteration tugs at the entire thing, either unraveling into a heap or pulling the pattern together in a single sweeping movement.

For example, consider the economy. Whenever you buy a card from the market, you pay for it by placing a rupee on every card you skipped. Pick up a card with rupees on it and you become a little richer. Simple enough, until you realize that this is a closed economy, with rupees rarely entering circulation. Instead, nearly every rupee on the table changes hands regularly. From the cash placed on market cards, yes, but also as you bribe local tribes for their permission to play a card into their territory, or tax another player because they carelessly positioned a road and hadn’t set up ways to hide their wealth, or engage in some straightforward commerce. Even the simple act of spending both of your actions to get rid of worthless cards from your hand gives you the option of stealing a single rupee from someone else, just one more way to bully the closed economy that everyone is slave to.

Another example is found in the spies. These little cubes trundle around the table, traveling across player tableaux at a snail’s pace. With some effort, not only can you have them land on certain cards to earn a particular empire’s favor by spying on their behalf, and not only can you have your spies bribe enemy cards to your side or simply murder them away to the discard pile, but you can also carefully position your guys to make your military actions easier. Embedding a spy on someone’s Persian Army card, for instance, means you now have a guy on the ground in the Persia territory. If you happen to launch a military campaign in the region before they have one of their own spies wipe out your guy, you’ll have insider info about enemy troop movements, letting you sidestep a mutual bloodbath and instead indulge in a good old-fashioned massacre.

It’s this deep interconnection between systems that makes Pax Pamir so intricate. The individual bits themselves are relatively simple. There are the actions you’re always allowed to take — buying a card from the market, playing a card to your tableau, and discarding something from your hand — and then there are the actions that require a card in your tableau. Once you have a card adorned with one of those colorful little boxes, you can now take those actions. This is brilliant stuff, giving every card value without loading them with text. As a second stroke of genius, the state of the board vacillates between four “regimes” that represent the current tone of the conflict, and certain types of actions are free when their regime is in place. During an Intelligence War, for instance, all the various actions dealing with spies are free. During a Military Struggle, having a few cards with Campaign actions on them will let you dramatically transform the state of the board in a single turn.

The British project out from Herat, all others are scattered before them.

It’s brilliant, grand stuff, capturing the bitter taste of betrayal and the thrill of a successful military action, the joy of throwing around your economic weight and the perils of watching another empire slowly span the map with roads and armies and loyal tribes. All these systems can make for some long turns, but I’ve very rarely felt so engaged while watching someone else hem and haw over which action to take. While they’re fretting, I’m already plotting how to undermine someone else. Meanwhile, across the table, Somerset is plotting how to undermine me. She pretty much always wins at this mean game of conniving and deceit, which I think says a lot about her.

As I mentioned earlier, Pax Pamir won’t be for everyone. It’s the sort of game that might end in a hailstorm of genius moves after thirty minutes, or drag you through the dust for three hours. It sees two sides perpetually ganging up on the third, only for the tides to shift and alliances to reform. Failed conflicts result in real punishments, negotiations can be tense and loaded with coiled-viper threats and bluster, and pushing yourself over the edge to final victory is one of the toughest accomplishments of the year.

Still, Pax Pamir is one of the best games I’ve played. Ever. It isn’t the sort of thing that could be described as effortless or breezy; quite the opposite. It demands attention. Energy. Wakefulness. Perhaps your firstborn. But the reward is worth it, crafting one of the most complex, multifaceted, and deep experiences of the year. For once, you should fight a land war in Asia.