Gale Force Nine has been batting a thousand lately, which yes is a sports reference I understand because I’ve always loved badminton, thanks very much. So far, they’ve managed to nail the feel of each and every series they’ve acquired the license for, from Spartacus: A Game of Blood & Treachery, which captures all that show’s themes of corruption, backstabbery, and the reduction of people to playthings; to Firefly, which was about ramblin’ through space because Firefly the television show was about ramblin’ through space. Also smuggling cows.

Now Gale Force Nine has acquired the license to Sons of Anarchy, television’s preeminent motorcycle-gang-as-Hamlet program, and this time they’re proving that they understand the series even better than the series knows itself. For one thing, Sons of Anarchy: Men of Mayhem never transplants its motorcycle gangs to Ireland in search of a kidnapped child, because the board game version has the sense to know that’s a stupid and boring thing to do. Instead, the board game knows how to have fun, every second, all the time — so let’s take a look at my top five fun moments. 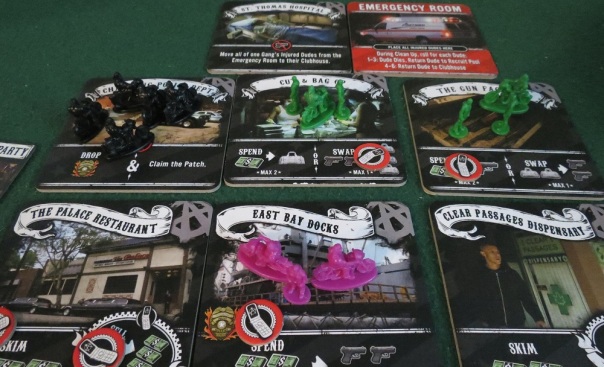 Motorcycle gangs in their natural habitat.

At its heart, Men of Mayhem is an area control game. There are a bunch of locations, randomized each game, and each offers something different. For example, the Impeccable Smokes & Cigars Shop is a front for criminal activity, so you can take control of it by riding your dudes across town and parking out front, and as long as you’re the only one with dudes there at the start of your turn, you can exploit it to trade a gun for a couple bags of “contraband” (read: duffel bags stuffed full of porn and drugs). Or you can sell some contraband for wads of cash. The only downside is that Impeccable Smokes is a pretty obvious front, as most American smoke shops are, so trading there will get you some Heat, attention from law enforcement — but more on that later.

In our first game, I had a friend — Elliott we’ll call him, because that’s his name — who was happily stockpiling a bunch of contraband, probably hoping to sell it off for a tidy profit at Impeccable Smokes. The only goal in Men of Mayhem is to have the most cash at the end of the game, so I didn’t want his upcoming deal to go down.

I put pressure on him. Just a little at first, riding over to Impeccable Smokes and exploiting it before my friend, selling a single bag of contraband just to block the location for the rest of the round. And I started following his gang around with a single club member, preventing him from taking easy control of any locations. Eventually, a temporary location appeared out of the Anarchy Deck. It was Brick Snatch, which would let whoever controlled it steal two duffel bags of contraband from someone. Naturally, I hightailed over there with my entire gang.

Elliott tried to convince the other players that I was going to steal from them, but I assured them he was my real target, and greased their palms with some cash to keep them from getting involved. Desperate, he drove his gang over and we had a throw down, which is how manly motorcycle gang members say they’re going to shoot and beat the shit out of each other. Guns came out, we drew some heat, and we both sent a few of each other’s dudes to the emergency room. However, I came out ahead by a hair, so I exploited the location, stole his duffels, sold them for nearly nothing just to piss him off, and threatened to block the hospital, which would mean his dudes had a 50/50 chance of dying in the ER…

…Unless he pledged allegiance to my gang, that is. Not wanting to be all but knocked out of the game so early, he agreed, and began plotting his revenge.

Lesson: You’re allowed to be mean to people. Encouraged, even.

The Mayans better drop some heat!

I have another friend who works as an accountant for his day job, and because he’s good with numbers, nobody at the table could bluff him.

See, in Men of Mayhem, most of your resources are kept secret. Nobody can see how many guns, contraband, or cash you have, so it’s possible to say you have no money even when you have a lot, or act like a little wimp to get people to attack you, then BAM you have all the guns and now they’re dead.

Unless you’re dealing with this guy, because he’s set up a little Excel spreadsheet in his brain, with little columns cross-listing each player and resource. This let him guess how much contraband we were going to sell during the end-of-round Black Market phase, where everyone bids the stuff, and if only a certain small amount has been bid, then you make more money. And our accountant friend was doing his diligence, keeping track of who had contraband and how much, and wagering just the right amount to make the most money. He’d stockpiled the perfect amount for the last round, and had worked hard to keep contraband out of our hands, and was planning on turning a massive profit right at the end of the game.

Except, oops, the last round brought out a Customs Crackdown card, meaning there would be no Black Market! Our friend was beggared as he tried to switch to a gun market, and he barely lost the game.

The game lives up to its “anarchy” and “mayhem” taglines.

I somehow convinced two of my sisters to play Men of Mayhem with me. It was a huge surprise that they said yes. Neither had ever seen a single episode of Sons of Anarchy, and the theme sounded maybe a little objectionable to them, but they were troopers and gave it a shot anyway. However, years of natural and healthy sibling rivalry made them each other’s worst possible enemies. They constantly hounded each other with their biker gangs, blocking locations and stealing exploits and having fist-fights outside the police station. They swore at each other, which is a no-no in this house, but I couldn’t stop them because they swore at me and made me cry inside.

A one-time location appeared, and both decided they wanted it more than anything. It was a counterfeiting op, a big job that would give them a whole storage locker’s worth of cash, though for double the heat. But they both wanted it, so they bribed me into not traveling there, then descended on it like a swarm of locusts, each shouting at the other to leave. Eventually they threw down. Both made deals with other players for extra guns, held out fists with firearms hidden securely within, and opened their fingers to reveal:

My youngest sister had only brought a single gun to the fight, while the other had wagered a ton. All her guns, in fact. After the dust settled, she sent some of our youngest sister’s guys to the hospital and the rest of her thugs back to the clubhouse in shame, and exploited the location. Only then did we point out how much profit she’d made: nine cash, minus two heat she’d have to pay to reduce, minus the three cash she paid me to stay away, minus five guns, minus one rookie in the hospital. At most, she’d made one or two cash in profit; at worst, she’d lost money on it.

She swore at me again.

Lesson: Play with your loved ones. It will strengthen your familial bonds.

A throw-down at the Suburban Meth Lab.

My sister brought her husband with her, because she loves him and I suppose the rest of us do too, though we’ve always thought he’d end up in jail one day.

Anyway, he didn’t pay much attention to the Heat he was drawing. He traded at the most dangerous locations without thinking about it, bringing in shipments of guns and dope down at the East Bay Docks, then selling it at Tienda de Discos. He also used guns too often, drawing attention from the ATF, and sold drugs during every Black Market phase. And somehow, every single heat-generating anarchy card applied to him. By the game’s fourth round, he was hotter than Heisenberg.

Heat does two things. First, it limits how many drugs you can sell at the Black Market. Second, and much worse, if you get too much, you have to rat out one of your gang members to take The Fall for everyone else. Since your gang is built of two types of dude — wimpy Prospects and manly Members — it’s especially bad to lose the big guys. After having to send two of his members to prison, my brother-in-law couldn’t keep up anymore, because he’d lost so many of the guys who give you order tokens and win fights. The rest of his game was spent quietly reflecting over why he tries so hard to be nice even though I’m so mean to him.

I mentioned before that you hide your resources, and how it lets you bluff your friends. Well, there’s nothing quite so sweet as going the entire game pretending you’re the Gun Lord of North America, selling to anyone who asks nicely (even if they’re about to fight you!), making every single smuggling run you can, and talking constantly about how you shouldn’t do that, not unless you LIKE the smell of hospitals. And then at the end, you pull up that screen and it turns out you were living hand-to-mouth the entire game. You only ever had one or two guns at a time.

Instead, what you were hoarding was cash. Stinky stacks of greenbacks, as far as the eye can see, provided you put it very close to the table.

And lies. So many lies.

Lesson: With Sons of Anarchy: Men of Mayhem, Gale Force Nine has done it again. This game is mean, simple to teach, quick to play, full of bluffing and betrayal, and way, way better than its TV series. It transcends.

Posted on August 11, 2014, in Board Game and tagged Board Games, Gale Force Nine, GenCon Loot, Sons of Anarchy: Men of Mayhem. Bookmark the permalink. 10 Comments.