How to Write a Board Game Manual 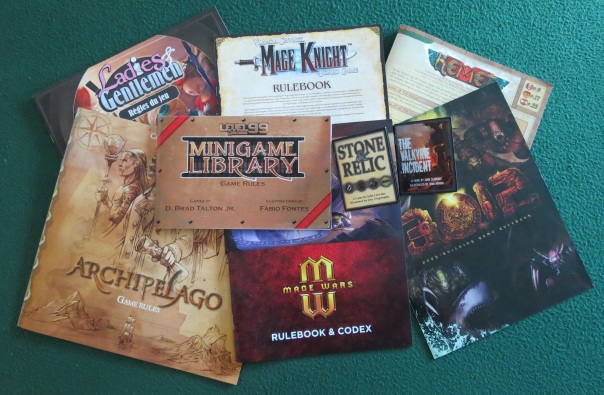 If you’re now thinking, Well why the hell should I listen to you?, here’s my response: Wow. That was kind of harsh. Maybe I’m just some dummy, but I’m a dummy who reads a freighter’s worth of board game manuals every year, and I’ve come to appreciate certain details that make them easier to read and much better at actually teaching me your game. What follows is a list of ten tips I’d appreciate you following the next time you’re seated at your computer trying to type out your new board game’s rules.

#1: Your First Objective is to Explain My Objective

This might seem obvious. Crap, I agree, it’s really obvious. Still, I feel like I have to say it because some rulebooks like to play clever and squirrel away their victory conditions in the middle of a wall of text or at the end of the book. After all, victory comes at the end of the game, right?

The thing is, there’s very little worse than getting halfway through a manual and still having no idea how all the different actions, options, and components tie together. So your game has a betrayal mechanic? Great! But why should I care? Is the goal to betray as many people as possible? To keep from being betrayed? To find the traitor and bury them?

You need to tell me why I’m doing the stuff your game has me doing, otherwise there’s no purpose or context to the actions you’re explaining over the course of your manual. Instead of holding back, tell me the objective as soon as possible. Make it your first paragraph if possible. And rather than being smart and telling me that the goal of your game is to discover the goal of the game, go write that in your rulebook, because in that rare case, that’s the goal.

I love theme! Not only does it transform your game from an abstract combination of pieces into a coherent whole, it also lends your game’s actions a feeling of internal logic. If I’m playing a game about being a fireman, for instance, I’ll instinctively know that a fire-axe breaks through obstacles while the fire-hose is for pacifying rioters. And if you include a little vignette at the beginning of the rulebook that introduces me to the game’s characters, I’ll be aware that the Hotshots dig trenches, the Chief orders people around and isn’t very patient, the firehouse mascot is a mean dalmatian who the Chief saved from the pound, and Doug takes unnecessary risks because his wife left him.

Or maybe that’s an example of theme being misapplied.

I’m not arguing that your theme has to have a certain volume to it, or that too much is a bad thing. Yes, sometimes that’s the case: in the above picture there are four massive pages of silly exposition that have literally nothing to do with the game they’re prefacing other than the fact that the game takes place in a future Mesoamerican setting and so does that huge story. On the flipside, it’s even possible for your thematic introduction to be too short. Merely telling me, “This is a dungeon crawl” only acquaints me with the barest explanation of the game’s genre, and I probably already knew that because the cover showed a warrior, a mage, an improbably-endowed ranger elf babe, and a hobbit crawling into a dungeon.

Rather, use as much theme as your game needs in order to explain the connection between the theme and the mechanics. Some games need a short paragraph, others make good use of short stories. Twilight Imperium, for instance, can get away with a fairly lengthy intro because it lends the game’s actions a sense of import, intrigue, and urgency, all of which support the game’s intended method of play. None of this is necessarily easy, but you were smart enough to design a board game, so I’m sure you can figure out how much lore to drip-feed us.

Not only is including a component list a handy way to show off your game’s production values, it also serves a couple very helpful functions.

For one, sometimes I zone out when I’m reading rulebooks. Maybe that’s disrespectful or something, but it isn’t usually a problem because I’ve read so many in the past that I can usually figure out what I missed. If I’m not sure what you mean when you refer to “Rune Mutation Cards” though, I can use your component list to quickly catch up, and I appreciate not having to skim back through the rules to figure it out.

Second, sometimes parts go missing. Sometimes it’s a problem on the manufacturer’s end, which I’ve had happen a couple times and didn’t discover until we were playing and suddenly had no idea why we didn’t have the right or enough components. Other times, people have these really oblivious kids who put things, like colorful eurocubes, up their noses. And it would be a shame to not know that you were missing a game piece when you rush your kid to the doctor’s office for an obstructed nasal passage, because then you couldn’t ask your doctor to hold onto anything he fished out of there.

Don’t rush right into the rules. Start from a broad perspective and give me an outline of the phases of your game, and then deal with each one by one. Learning a game is easier when we can visualize where each phase is in the overall structure of one game round rather than being hurled into the water and not being sure whether we’re in a pool or the ocean.

The same advice as above also applies to explaining special circumstances. Tell me what the actions are, and leave exceptions for very last, usually listed as a helpful reference. It’s confusing to be told that I can’t do stuff, unless it’s something like “Don’t discuss the objectives on your hidden objective card.” Most of the time, pointing out things I can’t do is a surefire way to confuse me.

If you aren’t clear what I mean, I’ll finish that sentence: Ambiguities are shit.

For instance, the above picture shows a rulebook that’s explaining the role of four heroes. The Warrior, it tells us, “Slays monsters without taking damage by moving onto their square.” One might assume that therefore all our heroes can slay monsters, it’s just that they take damage instead of avoiding it. Turns out that isn’t the case, and I needed to consult a rules clarification thread in order to resolve what seemed like a logical conclusion to me. This is sub-optimal.

Unfortunately, ambiguities are often in the eye of the beholder, so perhaps the best course of action is to…

For anything reasonably tricky, give examples. Even if your battle system makes absolute sense to you — maybe you just take the damage and subtract the defender’s armor value and there you go, voilà, only a moron wouldn’t get it. But instead of assuming I’m intelligent and have the vocabulary to understand all your big words, just pretend I’m dumb and give an example. If I understand the rule, I’ll skip the example anyway, and if I’m having a brain-fart or a bad day, I can take the extra thirty seconds to acquaint myself with it. I promise to feel appropriately idiotic if it turns out to be simple enough that a water buffalo could understand it.

A great example of doing this well is the Mage Wars rulebook, which includes a four page (these are big pages) walkthrough on how to play the game. It covers basically everything major, from building a custom deck for each example mage and then through multiple example rounds. Better yet, Mage Wars uses this walkthrough to teach me the game before even bothering with any of the nitty-gritty, so reading one simple section gives a comprehensive idea of how an entire game plays.

As in, remind me a lot. Especially if your game has lots of little nitpicky rules. And maybe this is asking a lot, but please offset these in a different color that I can quickly skim and ignore if it turns out I did indeed remember that particular rule.

The above picture has a great example from the rulebook for Archipelago, which does a fantastic job of reminding players of certain easily-forgotten rules.

You’re a genius at making games, it’s true. The very fact that you’re making a board game means you’re probably a pretty smart human being, and quite possibly very attractive too. Still, you aren’t infallible (unless you’re the Pope and you’re making a game too, in which case, pardon me). You’re going to make mistakes. Sometimes with spelling, or a misplaced number, or just an instance of poor phraseology. This is linked to many of the points I’ve listed above, and the best way to stamp it out is proofreading.

Now, if you think that you can be your own proofreader, you haven’t been hearing what I’ve been saying. You might be a fantastic writer and a pro editor, but you’re too familiar with your own work to be trusted with it — especially since you already understand how your game works, so how the hell will you be able to single out poor explanations or failed examples? You must have someone else look at your work, preferably people who don’t know how to play your game and get to learn from your prototype manual. Feel free to sit and watch them learn how to play your game, but be the creepy type and don’t offer help when they reach a confusing part, because you’ll discover a whole slew of weaknesses to shore up before your rulebook is ready for the general public.

It drives me nuts when I have an obviously well-constructed game on my table, I’m ready to play, and it turns out there’s no player aid or manual index to help me out when questions inevitably arise. Now I have to flip through your big floppy rulebook looking for answers; or, worse yet, I have to go and look on the internet.

Even the simplest games are often full of small complexities. So remind me what you want: outline your phases, remind me that I’m allowed to draw a card when I lose a battle, list and explain those fifty power-up tiles with arcane symbols on them, remind me of the weird numerical values of each building type when I tax my populace, etc. The more you can cram onto your reference card (or whatever you use), the less I’ll have to dig around for clarifications.

Dear readers: What advice would you give to the author of a board game rulebook? What drives you nuts, and what do you like?