← Pat the Hat Makes a Buck
GOSU or Go Home → 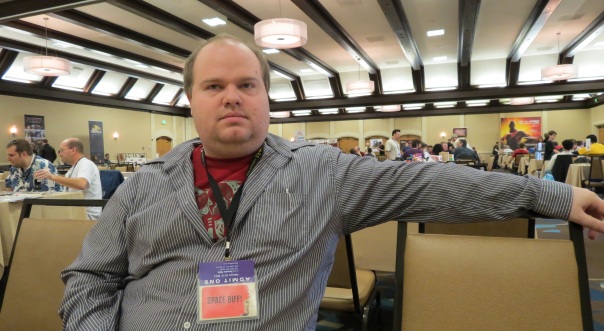 We all knew this day would come — oh, you’re not sure what day I’m talking about? Well, clearly the day when Dan wouldn’t be satisfied with merely being the man behind the internet’s one and only boardgames and PC games blog. Now he’s decided to branch out into New Board Games Journalism, which he just coined earlier today. Coined and minted.

Thank goodness there was a local opportunity to flex his new investigative journalism skills. SaltCon is in town for the weekend, and Dan managed to procure exclusive coverage of the entire event. Seriously, the whole thing. And it was pretty darn awesome, with lots of cool designers showing off their newest games. Footage below.

War Command, which is coming soon to iOS devices and follows a CCG model (more info here), has some of the best card art I’ve seen. Not only is it absolutely gorgeous and appropriately gooey, it’s theme is also deliciously unified; so even though the different armies sport distinct styles (and appendages), they all conceivably come from the same war-commanded universe. It looks to be joining in the “battle game with cards” craze that’s been going around lately, à la Summoner Wars, Mythic Battles, and Mage Wars, but its designer assured me he’d never played the big SW, instead citing Stratego and Magic: The Gathering as his primary influences. I’m a little concerned about the degree luck plays in a match of War Command — there’s quite a lot, and at times the outcomes of skirmishes felt entirely based on the luck of the dice rather than any actual strategy, but of course we’re basing that off of just one play.

Dungeon Heroes has already completed a successful Kickstarter, and its designer seemed determined to buck the Kickstarter trend, insisting that they’d probably be releasing early. Which would be fine by me, because this abbreviated dungeon crawl looks great. Oh, and the monster and hero meeples are wonderfully detailed.

Clash of Realms is another local effort I hadn’t heard about, with a unique art style and some great enthusiasm (their site can be found here). The designer’s name is Luke Spoon, which pretty much guarantees he’ll either be a game designer or a nursery rhyme protagonist. I didn’t get the chance to play the game, but it seems to be coming along nicely. I was a bit surprised to hear that the estimated playtime is between one and four hours, though there’s also an “assassination” mode that sounds more trim.

The RPG Mayhem from Midnight Campaign caught my attention with its unique and intuitive method of tracking actions. I haven’t played many pen-and-paper RPGs, and something simple like this looks like it might be an interesting starting point into board gaming’s most intimidating sub-domain, other than wargaming and party games.

My love for Plaid Hat Games and Summoner Wars in particular is already well documented, so there’s nothing else worth saying there.

And last but certainly not least, I finally got a chance to run into Ryan Laukat, whose rapid-fire Kickstarter successes have transformed his cherubic features into a manly legend dripping with board game design sexuality and lots of chest hair. That was what I imagined he’d be, and I’m happy to report he doesn’t disappoint. After we wrapped up our interview we got a chance to try out Eight-Minute Empire while Ryan took a well-deserved break to enjoy some lunch, and I have to say it was one of the best gaming experiences we had at SaltCon, even if it took closer to 15 minutes than 8.

Anyway, it was a lot of fun. Next year I’m sure we’ll be able to bring you more exclusive coverage!

Back to you, Steve.

← Pat the Hat Makes a Buck
GOSU or Go Home →