There’s a pleasant familiarity to rondels. Around and around your pawns go, their position determining what you’ll be doing this turn. Why do they complete this circuit, this flat circle of time? Are they fleeing or chasing, running toward or running away? Perhaps there is a deeper reason. Perhaps, if they repeat these rotations to satisfaction before the game is concluded, they will come face to face with themselves at last. Then there will be no more running. Only acceptance.

Or maybe it’s only because rondels are an efficient way to narrow a wide range of options to a digestible handful. That’s the case in Winterborne, anyway.

Shaman and Warrior going around.

For the uninitiated, let me tell you about rondels. A rondel is a small circle. That’s what it means in Old French — roont, a small circle. You move your pawn around this circle, from space to space, your actions determined by where you’ve landed. Or where you began. Either. Rondels are versatile things. In Winterborne, for instance, everyone has their own personal rondel, which is traveled by three very different characters. And while these pawns’ actions aren’t determined by their space, they’re certainly informed by it.

I’ll explain. In Winterborne your rondel takes you on a tour around the known world, touching certain spaces you already “own” while hopping over the interstitial spaces that have yet to be conquered. When one of your characters lands, they can take any of their actions. The Shaman is your economic force, gathering money, soldiers, and favor tokens you’ll only use once winter rolls around. Explorers raid for food or add cards to your deck, for in addition to being a rondel game Winterborne is also a hybrid design that features such things. Meanwhile, your Warrior can conquer new tiles or wield his hammers and hatchets against nails and wood to construct settlements and churches.

Here’s where the terrain comes in. Depending on where your characters land, they interact with that big cluster of colorful hexes in the center of the table in different ways. When conquering, the Warrior can only claim tiles from the color of hex he’s now touching. Early on, each space is only touching one color; later, after you’ve claimed one or two extra tiles, some of your spaces will touch multiple colors, thus letting your clan interact with that region more often. Of course there are also points to consider, since Winterborne is a game about grinding out efficiencies. Setting up buildings on clusters of land acts as a multiplier. Two buildings multiplied by three blue regions equals six points. That sort of thing.

The real draw, though, is found in the way your characters move from place to place. Your deck provides random hands of cards. Two cards are needed to move a character: one for a character icon, another to determine how far it will move. Nicely, there’s room for some juggling. With four cards in your hand at any given time, plus some you may have stored off to the side previously, an efficient turn will usually feature two moves, even the occasional three. But rather than considering a dozen options at once, you’re limited to the handful permitted by your cards. Move your Warrior two or three. Move your Shaman or your Explorer. Small, bite-sized decisions.

And these decisions are made bigger by the stuff claimed from the center of the table. I’ve already mentioned how Warriors create new adjacencies, broadening your options whenever someone hits a space bordering two lands instead of only one. Your Shaman, meanwhile, can strike alliances, special scoring cards tied to the various lands they visit. Explorers bring new cards into your deck, providing new ways to earn points, icons, and sometimes abilities.

At a mechanistic level, Winterborne is easy to appreciate. As a hybrid design, it folds together deck-building, rondel traversal, and plenty of ways to gather points, but assembles those parts in such a way that they never step within spitting distance of overwhelming. Thanks to the clarity of its cards, you have room to make two good moves, or at least two optimal moves given the limitations of your draw. Bonus points if you’re also considering what you might draw next.

However, this digestibility also means it isn’t long before Winterborne shows everything it has to offer. Most turns revolve around arranging four cards into their most effective combination. Certain low-efficiency options are necessary, usually when you pause to gather resources. The contest revolves around resorting to these actions as sporadically as possible, stretching your Northling dollar (and Northling shields and Northling meat) as far as possible. It’s one of those games that awards pity points for leftover resources, when the reality is that the victor will nearly always be the fellow with none left over at all, the tell-all signal that they wasted no action, spared no card, mis-plundered no village.

That’s the good part, at least for those more interested in nickel-and-diming their victory than I happen to be. When it comes to everything else, Winterborne makes less of an impression.

It almost goes without saying that Winterborne hasn’t the slightest interest in making any sort of thematic statement, so we’ll leave that aside. Perhaps its worst trait is that most of its cards couldn’t make a Viking shrug, let alone prod them into going berserk. Some award a minor bonus when you used in conjunction with a particular character, or let you bounce actions around — say, by letting your Warrior negotiate some trade this turn instead of sacking a town. Some are more dynamic, especially Wylds, which fill up your vault and can all be triggered by playing a matching icon. But for the most part Winterborne’s offerings are just more cards, only marginally more desirable than those you begin with, and never get around to testing the boundaries of the systems that govern its little world. They exist because this is a deck-building game in addition to being a rondel game, and tick off the associated boxes with all the joy of stocking inventory. Extra icons in your deck, check. Minor perks you’ll use twice, check. Light set collection, check — although the rewards are paltry (and uncertain) compared to everything else on offer. 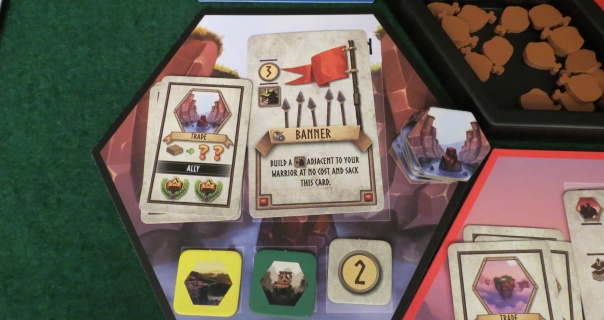 It would be easy to dismiss Winterborne as yet another heads-down efficiency game, complete with incremental point bumps, if not for the occasional spark of life. The titular winterborne powers, for example, are rule-twisting perks that don’t kick in until the game’s final rounds. With the arrival of winter, you’re permitted to spend favor tokens to activate your power — provided you’ve saved enough. Now you can tinker with your draws, raid indiscriminately, rearrange your buildings, and even transform one of your characters into a white meeple that functions like a final-form merger of Warrior, Shaman, and Explorer. These powers shape the endgame. If only it had been so intriguingly shaped from the start.

Then scoring rolls around and your favor tokens are worth that one pity point apiece. Including those you spent on winterborne powers. All that fuss to save up, and spending them doesn’t even represent a decision. So much for tradeoffs. This being a heads-down efficiency game, apparently asking players to make a genuine exchange would be too much hassle.

Winterborne isn’t a bad game. There’s some brain-tickling to be found in its combination of card play and rondel movement. But it lacks the spark of life that could have animated it into something special. The result comes across as an experiment that made a puff of colorful smoke: laudable for trying something new, regrettable for not standing out from the crowd.

Posted on January 14, 2020, in Board Game and tagged Board Games, Talon Strikes Studios, The Fruits of Kickstarter, Winterborne. Bookmark the permalink. 5 Comments.