← Social Deduction’s Last Gleaming
The Critic and the Card Game →

Built In An Hour: A Look at Rome & Roll

We may never know who burned Rome in 64 CE. Christians hoping to usher in the end of the world? Nero looking to make room for his infamous Golden House? Traders who forgot to douse their torches on a windy night, or time travelers rescuing the continuum from a tyrant worse than Hitler?

Then again, Dávid Turczi and Nick Shaw’s Rome & Roll is more concerned about the aftermath. More precisely, the rebuilding of Rome at Nero’s behest. And who’s responsible for that? Like a kid avoiding prayer duty at Thanksgiving dinner, I’m hollering “Not it!”

If you’ve been awake over the past year, you may have noticed this “roll-and-write” craze. The idea is as familiar as Yahtzee. Someone rolls a handful of dice (or flips some cards), and puts the results to use by writing them (or penning them) onto a pad of paper (or dry-erase board). Often the same results are shared by all, but not always. The most recognizable example is Welcome To; the reigning champ is probably Cartographers.

It’s a genre in its infancy, much like deck-building shortly after Dominion popped into the world but before anybody figured out it was good for something other than slapping a movie license over the top and cashing the royalty checks. It’s the sort of genre that screams “gateway game.” Or worse, “filler game.” Not that there’s anything wrong with either of those designations, really. But it does raise a question that has yet to be answered. Can roll-and-writes be more than trifles? Could you design, say, a wargame out of this? Or even a mid-weight Euro?

That’s exactly what Rome & Roll is trying to do. The mid-weight Euro part, not the wargame thing.

Right away, the problem with Rome & Roll is that its added heaping of complexity doesn’t make it better. If anything, it’s just more complex.

Consider its dice. At the start of every round, everybody drafts two knuckle bones out of a shared handful. There’s even a bit of resource management to consider, because not only do dice provide resources — everything from fish and wood to bricks and stone, with maybe a rare jewelry or basket (huh) thrown in there for good measure — but they also spend a special resource, at least if you want to nab two at once. The hurdle is that the resource in question is a senator. Senators are rare, only gained when you construct a building next to somebody else’s building. Which, in case you were wondering, is a loaded proposition for reasons we’ll touch upon momentarily. To gain the best dice, you’re incentivized to spend senators, but every lost senator is a real blow. What’s an up-and-coming proconsul to do?

Stare blankly at the dice, that’s what, at least for the duration of the first play. In the version I got my hands on — which was a prototype, it should be said — the dice were immediate focal points of confusion. There are resources to consider. That’s the simple part. Then there are action icons, there to let you build structures or raise legions or build structures according to a different set of exceptions or build a third thing. If that sounds cluttered, now add actions that don’t need an icon at all, the odd symbol for modifying other actions, and numbers that don’t seem to have any purpose except to convince newcomers that they can take six wood. The die really only provides one wood. That just happens to be the die’s sixth face. Why does it matter? No idea. But all that information is crammed onto tiny dice in a game where a misstep can prove enormously deflating.

“But Dan, my optometrist claims I have very good vision after that laser surgery.” First of all, congratulations! Enjoy your perfect eyesight. But frankly, the dice aren’t the only thing that fails to slide into 20/20 without some serious squinting. Roll-and-write games are no stranger to the long-form arithmetic of tabulated scoring criteria, but in this category Rome & Roll wins the ancient Olympics. Everything has its own tracker: the structures you’ve built, the cities you’ve conquered, the roads you’ve paved to span those cities, the coins that aren’t at all connected to the stuff you’re using to construct buildings. Add that to everything else — the senators, the legions, your warehouse, the advisors who can be bribed to provide a long list of bonuses — and there’s a lot to keep straight.

Of course, the presence of a lot isn’t a positive or negative in its own right. To Rome & Roll’s credit, everything is tracked on a handful of dry-erase boards, which is far swifter and easier than picking through twenty different stacks of buildings and tokens. And yes, all those tracks serve a purpose. Despite the optical vomit, the whole thing fuzzes together after a while. The real question is whether it’s worthwhile to reach that point at all.

Unfortunately, the answer is as knotty as everything else in Rome & Roll. When you get right down to it, drafting dice is the easy part. The actual process of rebuilding Rome, conquering the provinces, and making a bunch of money is anything but elegant. At its worst, it even feels somewhat aimless. 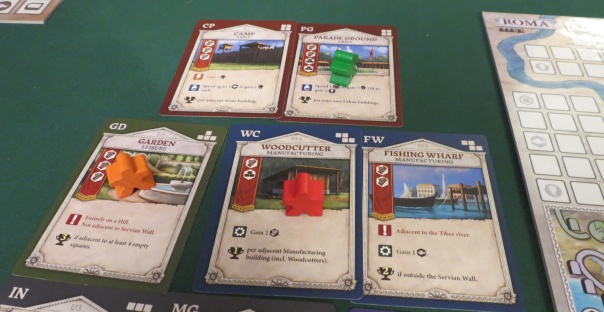 Despite the variety of buildings, they often come across as tertiary.

I’ll give you an example. Construction is the toughest, most exception-riddled action in the game. Each play features a new combination of buildings. So while one week you’ll be racing to chisel theaters and erect castra — that’s an army camp, not an ill-advised procedure for men — next time you’ll be piling fishing wharves by the Tiber and peppering Rome’s seven hills with hoity-toity villas. There are a few guidelines to follow: your overseer must hopscotch into position between previously built structures (and possibly scarf down some fish to move a little farther), nothing can straddle more than one hilltop, and there’s a vast difference between slapping down a parade ground near an opponent’s building for a bonus senator or adjacent to your own industry for a quick resource. And that’s before we bring up the Servian Wall or how exactly you cross the Tiber. Or how building with a hammer icon functions differently from building with a plumb bob. Or how some structures have unique restrictions, like a stadium being situated on marshlands next to an urban building. Or how everything sports differing on-construction bonuses, industry bonuses, and scoring criteria. The uncomplicated but impactful edifices of Era: Medieval Age, these are not.

Oh, and don’t forget you’ve got to pay for the things. Make sure you check your storage yard for available inventory before you go scribbling any foundations.

Here’s the kicker: after all that hassle, there’s a very real possibility your structures might not matter. Sometimes not even a little bit. Naturally some of them matter. And naturally it’s only fair that foolish placement should result in a fool’s wages. The rest of the time, there’s a readily-apparent difference between something useful and a forum-sized lemon. You can’t raise armies without the proper facilities, shrines dole out insane benefits for hardly any work at all, and you’re liable to pull one or two powerful structures like the harbor or insula for freebie actions down the line. But a bath, which is only worth something if it’s adjacent to three other expensive and likely-not-useful urban buildings? Or the theater that’s limited to one hill out of seven? No thanks. Not when it’s so much easier to let some other chump rebuild Rome while you pillage the snot out of Rome’s frontier. That or make a killing on trade.

Conquest, roads, and trade, son. That’s where you should invest.

Nero has declared that Rome will be rebuilt. For some that means raising the Eternal City brick by brick. For others it means raising armies in someone else’s camps, conquering distant settlements for more points than a piddly building will ever earn, laying roads worth more than conquering, and then trading the resources taxed from your new subjects for even more. Why stay home when there’s a fortune to be made abroad?

This isn’t to say that nobody should build. Rather, it’s a relative dead end, a necessary step toward providing some soldiers and resources and maybe a bonus or two. They’re the catapult that launches you toward escalating victory points. Just like that, the game’s most interesting and intensive possibilities are reduced to prep work for the real task of making a few hen-scratches. None of these other options measure up. Conquest is as easy as counting your armies and selecting which settlements will now feel the sting of your lash. Roads are readily paved if you’ve been hoarding stone. Taxation and trade go hand in hand, resources gained and churned into points far faster than mortar dries on wedges of granite.

In other words, all those intersecting demands and resources and restrictions to build something, and they’re minor compared to the stuff that otherwise feels like the supporting cast. It’s telling that in most of our plays, barely a third of Rome was rebuilt. Don’t fret over the placement of those polyominoes. They hardly matter.

The most of Rome we’ve ever rebuilt.

The result is a game that comes across as either unfocused or unmathed. Either way, it loads its heaviest burdens onto shoulders that don’t actually carry it anywhere. Rather, it gets away from itself, all that painstaking evaluation and placement amounting to little alongside the duller tasks of crossing off settlements, roads, and resources in a straightforward but overburdened chase for points. There may yet be a roll-and-write that accomplishes something deeper or more meaningful than the genre has managed thus far. In its current state, Rome & Roll is not that game.

A preview copy was provided. Any details are subject to change between now and publication.

Posted on October 21, 2019, in Board Game and tagged Board Games, PSC Games, Rome & Roll. Bookmark the permalink. 10 Comments.

← Social Deduction’s Last Gleaming
The Critic and the Card Game →