False Equivalence: A Look at Shasn

Let me ask you a serious question. Clear your head, take a deep breath, find your center. Should religious institutions be required to pay taxes? Woah there, cowboy. You have two choices. (A) No. Prayer is an intangible service. (B) Yes. Even God should tremble before the tax collector.

Oh, and just so you know, depending on how you answered, you just outed yourself as either an ultra-capitalist or a showman. And the capitalist answered A.

Welcome to Shasn, one of the most unhinged, perceptive, outlandish, and timely games you might never play.

Vote for this guy!

Without describing anything else but the ideologue cards — without describing what all those silly answers are for — Shasn almost sounds like a party game. Political issues are aired and then reduced to their most polarizing binaries. Other charmers include Should open defecation be made illegal? Should sewage water be recycled to drinking water? Should marital rape remain legal? At times the game’s Indian origins seep through with questions like Should firecrackers be banned during Diwali? Should fairness creams be banned? Should the GST be abolished? In that last example, the positive response reads, “Yes. It’s called Gabbar Singh Tax for a reason,” which I can’t claim to come within a mile of understanding.

Don’t fret, isolationist Americans! For anyone uninterested in the politics of modern India, there’s also a U.S. deck. The first card I peeled off the top? Do you support the sale of genetically modified crops? (A) Yes. They are safe and delicious. (B) No. They are a government conspiracy to control our thoughts.

Two things stand out about this reduction of political questions to their rawest, often stupidest, extremes. First, it’s a weirdly perceptive take on the tone of modern politics, with the most abrasive answer capturing the news cycle while everything else fades into obscurity. The effect is simultaneously laugh-out-loud funny and then, after a hiccup in the laughter, disquieting. And second, Shasn’s perceptiveness and disquiet only grow once you start leveraging those ideologue cards to greater effect. Turns out, Shasn is not a party game.

The country is quickly gerrymandered.

Answering ideologue cards earns political capital, represented by four colors of token that correspond to the personas you can cultivate for your up-and-coming politician. These tokens are immediately useful for buying voter cards, which seed influence across the map. And right away, this is a bit more loaded than your usual area control game.

The first thing you need to know is that your goal is always to form a majority. No less, and certainly no more. When election day rolls around, whoever holds the most majorities in thrall will win, and excess voters in any particular region don’t count for beans. However, it’s possible for two players to form a coalition, thus splitting the majority. This comes at a heavy cost, requiring the coalition members to trade one of their earned ideologue cards — more on why that’s tough in a moment — and prohibits them from doing any gerrymandering. The latter penalty is significant, because gerrymandering is awesome. In the game, obviously, put down your keyboard.

In Shasn, gerrymandering is a magic word that rearranges voters, shoving rivals out of your districts, weakening opponents in adjacent regions, or even fine-tuning the placement of your own excess voters. Other majorities are immune to such meddling, and the process is slow enough that it won’t totally rewrite the political landscape in a single turn. But over a few turns? Absolutely. Expect early majority-holders to become political powerhouses, both in game terms and in your table talk. 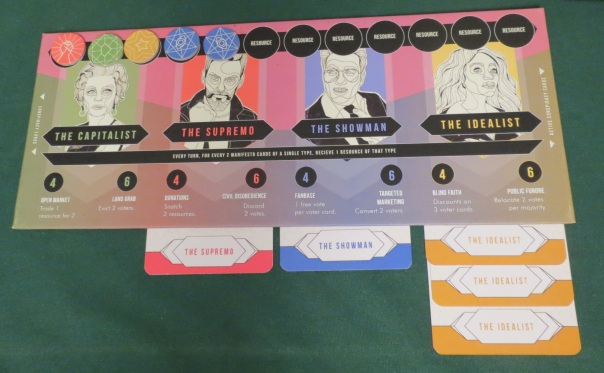 Fortunately, there are other ways to disrupt this process.

The simplest are headlines and conspiracies. Headlines afflict whoever finds one of their voter pegs in a “volatile zone,” often as the result of a rival cruelly gerrymandering your piece into a trap. A journalist has been caught misrepresenting one of your positions, thus forcing you to flip an ideologue card. A mole in the opposition party has grown greedy, permanently increasing the cost of your voters. You said something about immigration ten years ago, and voters are being driven straight into the opposing camp. These aren’t always negative, but the negatives are generally punitive enough that you’ll want to avoid them like a full-frontal hug with a victim of the bubonic plague. As a pity prize, volatile zones capture the worst voters, meaning your piece there can’t be moved or manipulated. Congratulations, you just allied with local fascists. They’re so grateful that they’ll never investigate anything you say ever again.

Conspiracies are more familiar, providing a purchasable alternative to voters. There’s the usual range of minor changes, like answering an extra ideologue card, stealing something from a rival, or blocking an opponent’s conspiracy. At their best, major splashes can be made, like a card that reverses an attack onto your opponent or the trifecta — a trio of cards that, when accumulated, can swing an entire district to your side. Don’t bank on that happening.

Far more interesting than either headlines or conspiracies, however, is the outward personality your politician cultivates over multiple rounds. As you answer ideologue cards, your answers are enshrined and your public persona takes shape. At first this is portrayed as an affinity for a particular sphere of influence, with every two cards generating a corresponding resource. Eventually, at four and six cards of a single type, special abilities are unlocked — abilities that happen to utterly revel in the excesses of each persona. The Supremo outright steals donations for his own ends. The Showman fires up his base for extra voters. The Capitalist evicts undesirable voters from their housing. The Idealist doubles of the effect of her gerrymanders via impassioned speeches.

Best of all, this is completely artificial. Returning full circle to where we started, your answers to ideologue cards are anything but genuine. Rather than making expressions of intent or policy, you’re stabbing at whatever will court public opinion or generate your desired personality. Within half an hour of opening the box, you’re compelled to be every bit as fake as every politician you’ve ever rolled your eyes at. 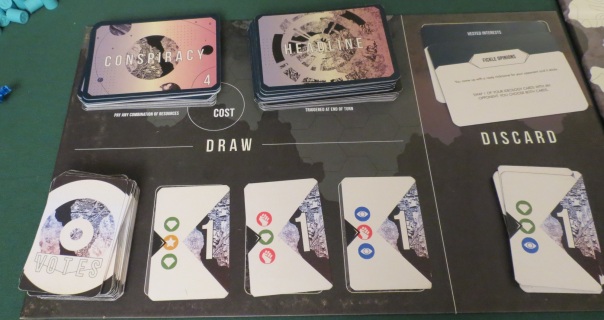 The bread and butter of political maneuvering.

In other words, the best moments in Shasn are those that come across as artificial, when you disingenuously answer a question to secure a bonus to your persona, obtain the resources you need, and gerrymander one voting district in order to secure another. Unfortunately, that isn’t the only thing that feels artificial — and not always in a good way.

The foremost problem is that there’s very little reason to engage in any of the game’s races. Don’t get me wrong, you definitely want to capture majorities. It’s just that if somebody achieves a head start in a particular district, there’s very little reason to bother competing with them. Coming in second earns nothing for your troubles, and the nature of the turn order and the steady output of resources from ideologue cards makes catching up a difficult prospect. On the one hand, fair enough — this is a national election, not second place in a bikini contest. But on the other, it doesn’t really convey that this is a close race for the hearts, minds, imaginations, pocketbooks, and gullibility of your citizenry.

Instead, it’s better to pick a region, stick with it, and leave the offensive for once you’ve secured a gerrymander and particular persona abilities. As a result, the game’s best features are usually relegated to the back half. Weaponizing your politician’s bravado and passion can be dynamic and exciting, generating clashes of personality and upending the political map that was deadlocked only moments ago. But there’s groundwork to be done. Those swings are a long time coming.

Of course, it’s hard to say what the final game will contain. As with all previews, I can only speak to the strength of the game I played. According to the design team, there will be a more challenging variant, complete with multiple voting primaries and bonuses in specific districts. Both sound great! Unfortunately, the version I played was too static for too long, failing to emphasize the game’s coolest moments until everyone at the table had already invested a sizeable chunk of the evening.

This country’s topography is bananas.

The rest of the time, Shasn is an unexpected but welcome surprise, both irreverent and relevant, and at times both deeply humorous and strangely unsettling. It’s a game of contradictions, part realpolitik horror, part bumbling comedy — especially when you receive an unexpected result from an ideologue card or have your entire electoral strategy upended by an untimely marketing campaign. The version I played required some additional work, but stood within reach of offering some seriously wicked gameplay and true satirical bite. With proper development, this could easily shape into something special.

Shasn is on Kickstarter for the next month.

A complimentary preview copy was provided.

Posted on July 15, 2019, in Board Game and tagged Board Games, Memesys Culture Lab, Shasn, The Fruits of Kickstarter. Bookmark the permalink. 15 Comments.